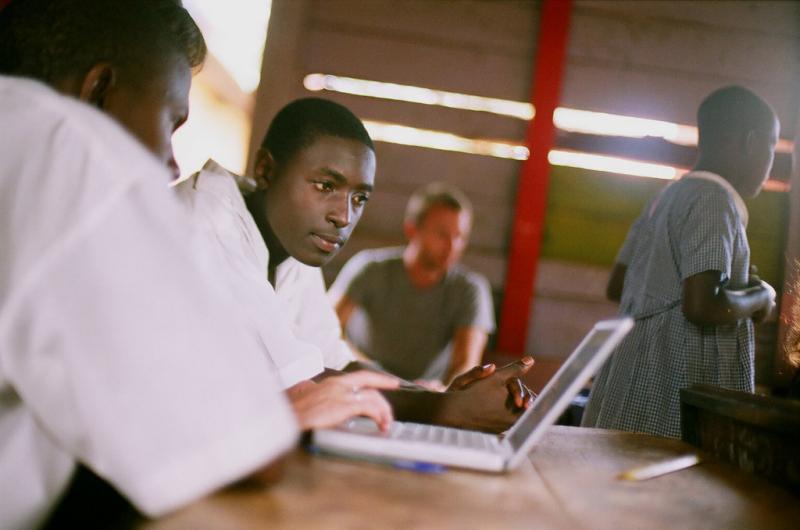 When I first started using the internet, the most important application that kept me hooked was E-mail. That’s probably the same case with thousands of other first-time internet users then. Today, it might be Facebook or Whatsapp.

However, in 2004 reading or rather checking my inbox meant walking some 1-2km to the nearest internet cafe in Kampala. That was without assurance that I had anything useful in my inbox by the way. Today, I get instant notifications on my smartphone whenever a new email comes in.

What caused these drastic changes and could they have been possibly predicted?

That’s where Paul Bagyenda comes in. Paul is the chief architect of Digital Solutions a software company founded in 1999 specializing in mobile and internet applications. Paul together with his team have built some of the most incredible software applications in Africa including Butterfly, an internet cafe management and billing system. Mbuni, an open source multi-media messaging gateway we listed as one of the top opensource projects built in Africa. And Baraza, a Mobile Instant Messaging Server that could have led to local Whatsapp only if the innovators saw the opportunity.

Having started using the internet as early as 1994 and built great products, he was in a more better position to speak about the future of the internet in Uganda. In a TedX event that took place in Kampala 5 years ago, Paul spoke about the advantages the Internet has brought for his business, the challenges of working globally and the opportunities the Internet would bring to this side of the globe.

Rise of the Mobile Internet

Paul rightfully predicted that the Mobile internet was the next big thing. His company at the time was involved in creating software that would deliver services to mobile phones through http protocol;

“2001 the internet was the future, but the trend of access was tending towards mobile.

The products they created included Mbuni MMS gateway and Baraza, a would-be Whatsapp App that probably was too early for its time. Paul advised “geeks” to create infrastructure that would make the delivery of internet cheaper to mobile devices.

“Mobile is going to be key. I think what I should be putting all my energies in,  speaking on behalf of all the geeks is creating the infrastructure to get internet cheaper on mobile.  I think that’s the next big thing that’s going to happen. By that I mean the servers, the software that does the moving of the bits around. “

There’s been a big push by the big Telecoms to push 3G coverage country-wide. Orange (now Africell) claims to have the widest 3G coverage in Uganda. However, MTN Uganda is probably more believable since it has the widest mobile coverage across the country. Now there’s a big push to 4G LTE internet with the latest Telecoms like Vodafone solely running their networks on the standard that promises the fastest mobile internet.

In 2009 when the talk was given, the  International Telecommunication Union puts the Percentage of individuals using the Internet in Uganda at 9.78%. Compare that to 16.2% in 2013. 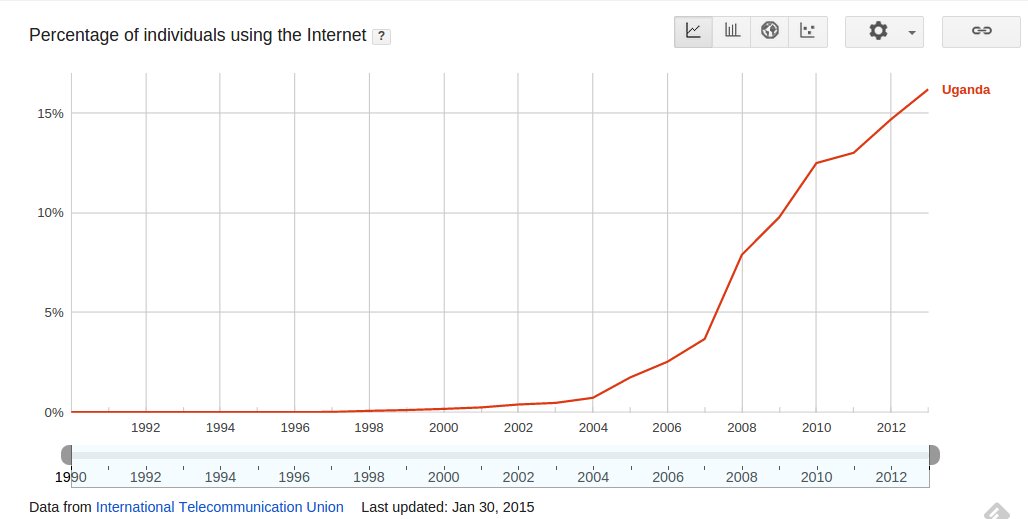 Percentage of individuals using the Internet in Uganda

But unfortunately, little efforts from the “geeks” to create the sort of infrastructure that would lower the cost of mobile data are less known if at all they exist. James Wire at least claims he’s tried creating Wi-Fi antennas from Metal cans;

The world as a global Workplace

Paul remarked that “geography was history”. Meaning the physical geographical boundaries that imposed limitation on movement of people and the consequent geographical lockdown of skills and services was history. “I don’t need to sit in silicon valley, I can be anyway and do work” he said. That’s why a Kenya ISP could contract him to create for them a billing system to manage their clients.

But how true is this today?

BPO (Business Process Outsourcing) is growing in Uganda albeit at a slow rate.  The The International Trade Center in collaboration with the National Information Technology Authority – Uganda (NITA-U), Uganda BPO Association (UBPOA) and the ICT Association of Uganda (ICTAU) recently implemented a project that would seek to increase Uganda’s ICT export.

Some might know him as the guy who sued MTN Uganda for stealing his Idea. But Paul is more than that. He’s a true visionary. And a Geek.