Africa is increasingly becoming a global software destination as the catalytic conditions such as infrastructure, computer and internet literacy, eCommerce, e-government mature.

The  Internet penetration of the continent today is 16 percent, and if Internet use proliferates in Africa at the rate mobile phones did in the early 2000s, the continent stands to add as much as $300 billion to its economic growth by 2025, a new study by the McKinsey Global Institute has found.

The current figures and economic climate is stirring interest and creative juices of software developers across the continent to tap into the new opportunities that the ICT industry presents.

Startups such as Afrinolly and iROKOTV in Nigeria are taking advantage of the internet adoption in their country by providing a platform where users can watch Nigerian movies on their smartphones. Gaming start-ups such as Kola studios in Uganda are developing locally relevant games like Matutu to provide entertainment on the go while in Kenya, several new companies are leveraging on M-Pesa’s massively successful mobile money platform to provide services to the masses.

However, this growth in the industry calls for even more talent to push the industry to the next level. Software developers and designers are at the epicenter of this ecosystem. But what kind of size of this profession does Africa represent? 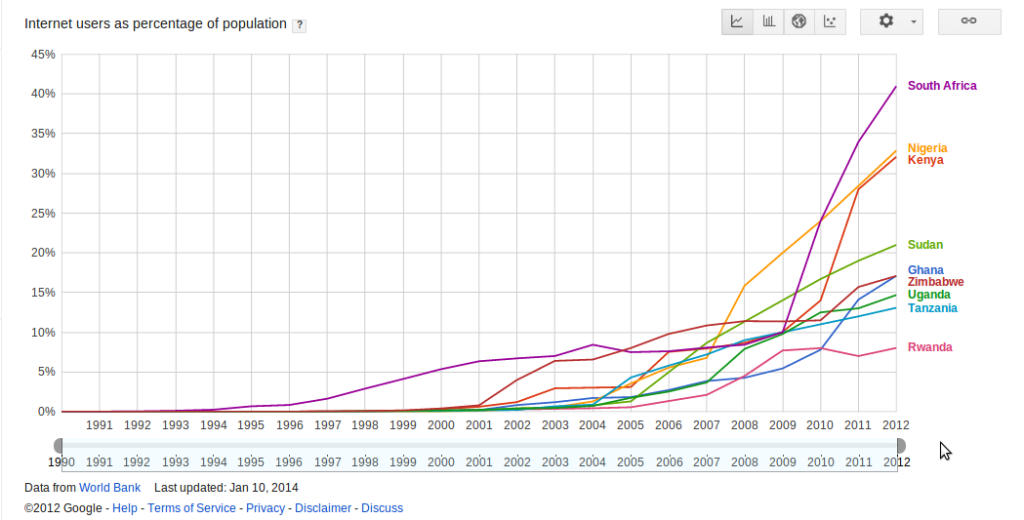 This map (see feature image or click here),  an initiative of the CodeAfrica project,  represents all GitHub users as of March 15, 2013 who had their profile location in GitHub set to either an African country or city. It’s no doubt that this Map largely correlates with internet users as a percentage of the population in Africa. The countries with bigger internet penetration have higher number of software developers which makes total sense.

Innovation hubs or hacker spaces are also largely playing a key role in fueling the industry. Currently, there’re well over 40 hubs known to the TechPost across the continent and these include Hive Colab and Outbox in Uganda, iHub and Nailab in Kenya, Klab in Rwanda, Silicon Cape in South Africa, ActivSpaces in Cameroon,  Hub-Accra in Ghana, Kokkolabs in Senegal, Flat 6 labs in Egypt among others. These spaces, some of which are sponsored by partners such as Hivos, The Indigo Trust, Google and Microsoft provide the co-working space and networking joint for hackers to do their “thing”.

Top global software players such as IBM, Intel, Google, Microsoft, ThoughtWorks are increasingly interested in this emerging ecosystem in the continent. These have setup regional presence with well furnished offices and perks such as free Soda and meals to attract the continent’s top talent to their empires. IBM has for instance as of 2015 has expanded its presence to over 50 cities across Africa,  Burkina Faso, Congo, Chad, Democratic Republic of Congo, Gabon, Madagascar, Malawi, Niger, Seychelles, Sierra Leone, Uganda and Zambia being the latest entries. Google on the other hand has presence in well over 10 African countries including Egypt, Ghana, Kenya, Morocco, Nigeria, Senegal, South Africa, Uganda. ThoughtsWorks has presence in South Africa, Uganda and soon Ghana. It’s no doubt that there’s a correspondence between where software giants that have local presence and the number of software developers in these countries. Facebook which has done a couple of projects on the continent, the latest being the SocialEdu project in Rwanda is rumored to setup physical offices in Nigeria.

Africa has a population of 1.033 Billion people. That’s a staggering market that’s yet to be fulfilled. It’s up to Savvy entrepreneurs to seize the opportunity and tap into this massive market.

PS: If you are a GitHub user living in Africa, please update your location to be counted in future versions of this map.