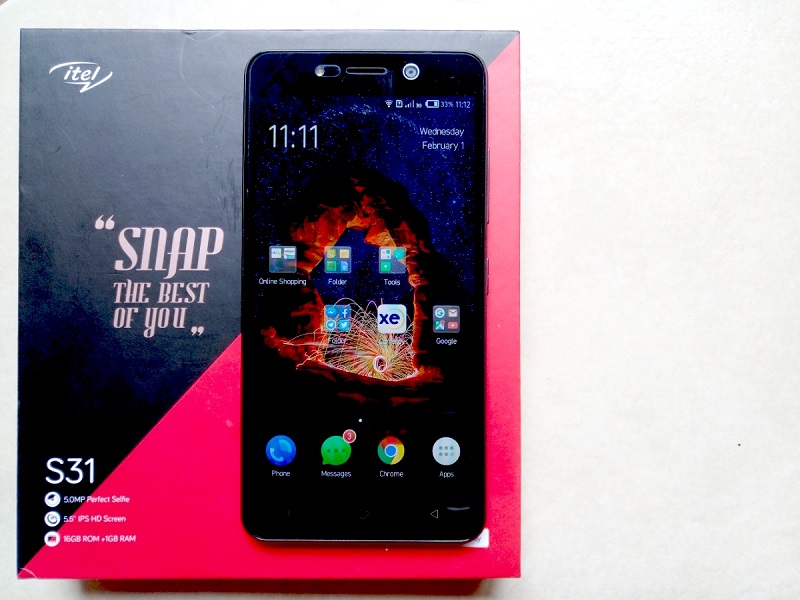 itel is one of the brands that command good presence and market share in the Ugandan market. Formerly known for feature phones alone, itel has been making top entry level affordable smartphones for the mass market.

The itel S31 is the latest flagship from itel replacing the S11. It’s an entry level device with good enough specs for a first time smartphone owner. The S31 is a well designed device with rounded corners, a textured back,  a 5.5 inch IPS HD display, with 16GB of ROM and 1GB of RAM. It is being marketed as a camera/selfie phone with an ability of taking photos even in low light.(we are yet to put that to the test). Below are our first impressions with the device.

The S31 comes in a neat and impressive black and red box. In the box is the device itself with a screen protector pre installed, white earphones, a black USB cable, travel charger, flip case, plus a 2400 mAh battery.

The S31 has a premium look and feel with a crisp 5.5 inch IPS HD display, a textured back, rounded corners at only 8.7mm giving the device a sleek look. It is an appropriate size making it fit perfectly in the hand though it feels like it could clip out. (The flip case solves that though). We enjoyed setting up the device which was basic and simple to do with no complications.

We also found the user interface very simple and user friendly just like stock android. It came with a couple of pre installed Apps consisting of the Google family of apps, the usual system apps and then Facebook, WhatsApp, a Data traffic manager, Xender, phone optimiser among others.

We quickly installed our favorite apps and noticed a little bit of a lag when switching between apps or multitasking which we didn’t expect since we have at least 4 cores of processing power and 1.3Ghz clock speed.

The battery is what I was quick to look at because a phone is no good if it has a weak battery. The 2400 mAh battery charges really quick but so does the draining (especially if 3G is active). For a normal user, this would take them the whole day but a power user wouldn’t last even 6 hours.

The itel S31 can be purchased from itel enterprises, Majestic Plaza Level 3 Shop 34-35 for wholesale and from various phone dealers around Kampala and the country for retail.

The itel S31 is going for the price if about Ugx 320,000 and comes with a 12month warranty + after sales services at the Carlcare Centre.

With the affordable price tag, basic specs, average camera and a 12 month warranty, the S31 would make an amazing choice of device for the first time smartphone owner or that little sister back from school that keeps on reminding you that you promised them a smartphone.

It would also work as a good temporary replacement in case you want a good enough smartphone on a budget. For those who are used to high end specs and power performance, this wouldn’t be the one for you.