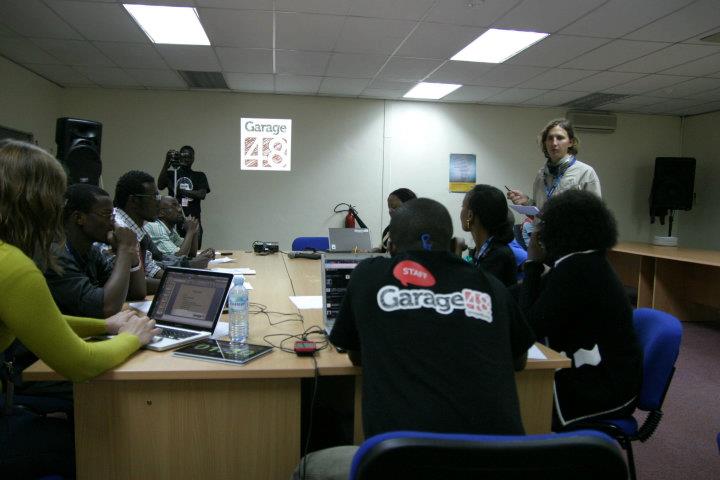 A weekend to remember is surely an understatement. Close to 70 innovators assembled in 10 teams comprising of developers, designers, marketers and entrepreneurs who worked tirelessly over the weekend to launch their products (prototypes) on Sunday evening.

In a record 48 hours; a flurry of code was typed away, ideas pivoted, bezier curves bent in Photoshop, contingency plans drawn, strategies made and equal amounts of networks built. In a simpler speak, a lot of hacking was done and so was guzzling of the cups of coffee. Awesome products (prototypes) were born.

The 10 teams that attracted the required number of members started developing their ideas into prototypes, marked underneath with bold. They were:

1. AgriTrader – platform for farmer and buyer collaboration where the agricultural produce is easily marketed in real-time thereby cutting the unnecessary need of often unscrupulous middlemen.

2. Zaala – a fun interpersonal betting app. This is not some virtualized sort of black jack but rather a mobile based smartphone that enables players/friends compete ferociously amongst themselves and rewarding winners upon victory.

3. Homie – an Uber of sorts for Kampala motorists. From the developers, “everyone in Kampala City is sure of at least one English word – traffic jam and through ride sharing, the number of cars can be greatly reduced. Nevertheless, rides to upcountry places can be shared thereby saving the drivers’ bucks as well as the other travellers”

4. Livana app – The manual employee registration lists for employees’ times of  arrival and departure are such a waste of resources, Joey Sekono, one of the developer’s behind Livana app argues. Instead they take a bold step at digitizing the time tracking process consequently making it just a tap away.

6.  The KarMart – Talk of availing expert auto motor information at your finger tips. This Windows based mobile app leverages user data to find out what users what and  cleverly crafting recommendations for them.

7. Clinic Map – Through the power of maps, this mobile based app shows you the nearest clinic for any emergency cases. Inspired by the dearth of readily available information regarding health and medical services, they seek to mitigate the void.

8. Maybe app – answer questions with Yes, No or Maybe. Plain simple. In the era where people’s attention spans average a measly 5seconds, this app has precompiled notifications that are answered on the fly when a user is prompted. A great solution for busy people and opinion polls.

9. Mbele – The eyes for the blind, such a catchy phrase! Mbele is a Kiswahili word loosely translated as forward. It plugs into the power of proximity sensors and real-time image processors to guide the blind with directions in the real world. A pair of headsets is plugged into a smartphone and interactive voice commands are given to the visually impaired users, leading them forward.

10. Makado – A bold attempt at commercialising locally developed software by hosting it on a dedicated market place on the web. All payments to be made with Mobile Money.

The previous Garage48 event in Kampala took place in 2011 and was a major success to local tech ecosystem. That time 11 products were launched. Many of the people attending then formed life-long relationships and formed teams for their current and future businesses.

Started in Estonia in Northern Europe back in 2010, Garage48 today operates startup hackathons in tens of countries across Europe and Africa. Over 10 thousand people have attended Garage48 events in tens of countries. Many of them have formed long-last businesses and raised investments from all over the world.