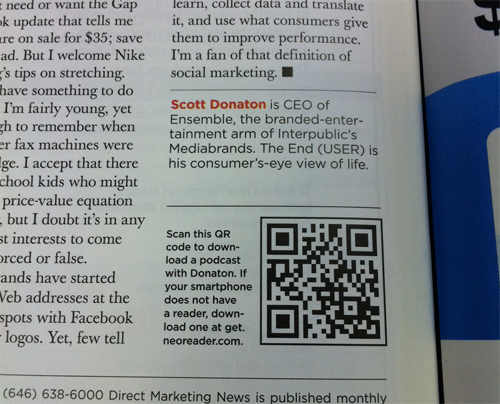 The other day, picking up a copy of the daily monitor newspaper, I stumbled on something I’ve only been hearing as a buzz word (and highly hyped by marketers) on the web — QR codes with the comment below.

To comment on these and more stories, scan this code using your smart phone or mobile device. Download a QR code scanner from the internet

What are QR Codes?

According to Wikipedia,a QR Code (abbreviated from Quick Response Code) is the trademark for a type of matrix barcode (or two-dimensional code) first designed for the automotive industry. More recently, the system has become popular outside the industry due to its fast readability and large storage capacity compared to standard UPC barcodes.

These two-dimensional bar-codes have been in widespread use for well over a decade having started from Japan and south Korea. They are a great way of linking information in the physical world with the digital world using apps in our hand-held devices. They’ve been used for advertising in magazines, on signs, on buses, on business cards, or on almost any object about which users might need information and also in retail. Anyone without specific skills can create one. For instance use this site if you’re the adventurous type.

The problem with newspapers until now

One of the challenges from a reader’s perspective with newspapers or print media as a whole has always been the fact that it’s less interactive and engaging. What I mean is that once you’ve landed on an interesting story or something that you would agree or disagree with, it’s very difficult to give that prompt feedback at the time when you want to. You’ve to use other media to actually have your voice heard. This is where digital media like blogs or online newspapers thoroughly beat traditional newspapers.

From the publisher’s point of view, it’s really difficult to measure the impact a story has had on the readers. While with digital media you’ve a myriad of web metrics like number of comments, page views, tweets and shares, with print media, you’ve to rely on other channels(like people talking about it on radio) or a top government minister stepping down after a published scandal.

How the newspapers have been playing the game
Newspapers have tried to overcome this challenge by first of all having an online presence that way increasing user engagement from internet users. Then secondly, they’ve tried to use SMS for mobile users without internet access. For instance Monitor lets its readers SMS their views by typing some keyword, followed by their comment then send to a short code like 6933 and then publish those messages in the next publication. This all has been and still is great.

But now, there’s something new

All these approaches have been working. But now, the daily newspaper is going further with QR codes. Users with a camera phone equipped with the correct reader application scan the image of the QR Code which then opens a web page in the phone’s default browser or gives the user an option of sharing the content via email or SMS. When I experimented with the codes on my droid using a free app called barcode scanner, it took me to the newspaper’s website or Facebook fan page depending on the code scanned where I could then look for the story and comment. Even though this worked like charm, I expected unique QR codes to be embedded next to a specific story so that when I scanned it, am redirected to that particular story from which i can then comment on it rather than to land me to their general website or fan page.
So it still it isn’t as fast and as seamless as reading a story online and immediately commenting on it, but at least initiates the process for the user to react to an offline or “hard” content online. For the newspaper, it gives them a precious metric upon which they can quantify the impact of a specific story.

The challenges with QR Codes

The more than a decade old technology isn’t without challenges for those of you who would like to use it. According to the Read Write Web one of my favourite websites, the technology has three problems at a pretty low level;

smartphones are still an elite product, the scanning process can be clunky, and QR codes look more like robot barf than something meant for humans. The potential is there, though.

I agree with the first two reasons. The smart phone market penetration in Africa is yet to reach an apex where these codes are used massively, though that’s about to change. And even though one had a smart phone, an additional third-party app needs to be installed (I wonder why phone/OS vendors haven’t integrated it in the in-built camera app). As for the second point, according to my personal experience with scanning the codes, it’s true, it’s some times a frustrating process scanning the code especially if you have a low-end camera and are dim light.
On top of these points, I would like to add mine which is that for those with smart phones, most people either haven’t heard/known about the technology or aren’t familiar with it in terms of usage.

On the technological front, QR codes face competition from flashier Augmented Reality (AR) technology, which overlays artificial reality on a backdrop of the real world. Then also Near Field Communications (NFC) and Radio Frequency Identification(RFID) both of which do not require line-of-sight, and they have massive industry backing(from the likes of Google for instance).

For me, QR codes are fun to use. I remember during the Airtel 3.75G Tweet-up held last month where people were given cards with these codes embedded on them. So you had to scan it with your smart phone and whatever it showed, you won that. Some guy won a tablet.  The QR codes were quiet familiar for the Tech-savvy audience.

The codes may not be so effective in getting user feedback as seamlessly as compared to simply hitting the comment submit button, but newspapers and print media can experiment incorporating it their Ads. For instance a user can be prompted to scan a QR code to claim a discount, initiate a call or send an email or SMS to the advertiser right from their phone.

However, parties interested with this technology have a short window of time before it’s overtaken by the “new cool kids in the block” I’ve mentioned above.

What’s your experience? Have you used them? Your comments below.