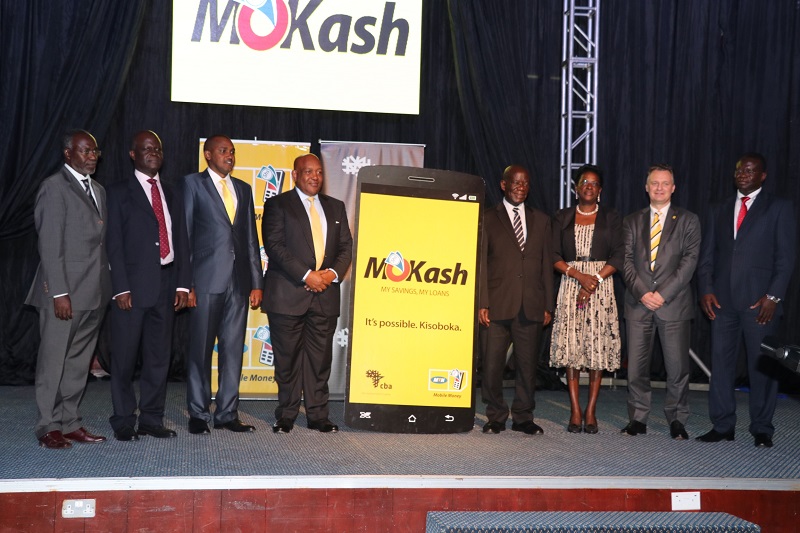 MTN Uganda in partnership with CBA Uganda yesterday launched a ground breaking micro-savings and loans product that will enable registered MTN Mobile Money users to conveniently borrow as much as sh1 million using their phones. The product is commercially called ‘MoKash’ and also allows MTN Mobile Money customers to save as little as 50shillings on their phones while earning interest of up to 5 percent.

According to Wim Vanhelleputte, MTN Uganda’s Chief Executive Officer, the launch of MoKash marks a major milestone in MTN’s effort to introduce financial services to an even wider section of Ugandans (especially the unbanked). This innovation is directly in line with government’s efforts to improve access to financial services for all Ugandans across the country. Vanhelleputte said that

MoKash is a groundbreaking innovation in Uganda’s mobile financial services sector that brings together the best of CBA’s many years of banking experience in East Africa and MTN Mobile Money’s vast reach and distribution network of over 60,000 agents across the country, MTN Mobile Money also employs, directly and indirectly, an estimated 185,000 people along the Mobile Money value chain – especially youth.

MoKash is easy to use. Customers do not need to fill in application forms. Registered MTN Mobile Money customers simply have to dial *165*5# to activate a MoKash account using MTN Mobile Money.

With over 7 million registered subscribers on MTN Mobile Money, which represents 70% of MTN Uganda’s total subscriber base, MoKash has a reach that extends to all corners of Uganda. Ugandans using MTN Mobile Money will now conveniently access loans at competitive rates and easily save while earning attractive interest rates. Through MoKash, MTN Mobile Money customers have access to small loans ranging between sh3,000 and sh1,000,000 instantly on their phones by dialling *165*5# and agreeing to the terms of the service.

According to Samuel Odeke the Chief Executive Officer of CBA, though MoKash is the first of its kind in the Ugandan market, it’s not entirely new. In Uganda MoKash is a result of a strategic partnership between CBA and MTN, the leading mobile telecommunications service provider.

“MoKash is a furtherance of the tremendous success CBA has achieved with similar products in Kenya and Tanzania,” Odeke said.
“Partnering with MTN means that the millions of MTN Mobile Money customers spread around the country will now have access to micro savings and micro loans at their convenience.  The power of mobile communications in impacting the lives of Ugandans is undeniable and we are pleased to be partnering with MTN for the launch of this service in Uganda,” he added.

In November 2012, CBA in partnership with Safaricom launched M-Shwari, taking the Kenyan market by storm. CBA also partnered with Vodacom to launch M-Pawa in Tanzania, in May 2014.

UCC’s Director of Corporate Affairs Fred Otunnu said, “We believe that by enabling mobile money users to access savings and loans through the phone, MTN Uganda’s MoKash is breaking into new territory that will ensure true financial inclusion for all Ugandans. UCC commends MTN for continuously pioneering new ways through which the mobile phone is positively impacting people’s lives,” he said.

NOTE: This is a press release from MTN Uganda.