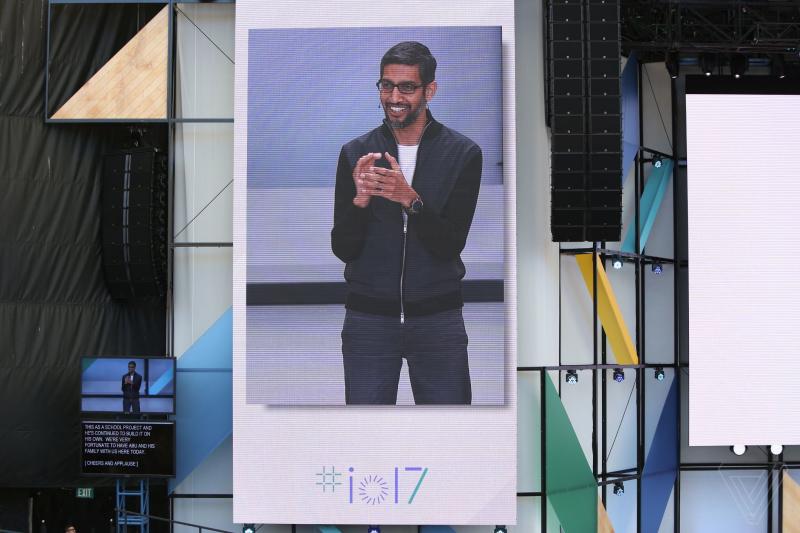 I watched Watched i/o yesterday. There was nothing splashy or cool to show expectant devs except to go through the motions; Android, Google cloud, Smart assistant and VR/AR.

I was probably most impressed about Google’s advances in compute infrastructure particularly to support it’s AI-first ambitions.

AI/ML are fairly new terms, currently buzzwords that if you don’t work with Google/Amazon/FB/MS, you are simply wannabe-ing. You can’t develop ML apps on Localhost, you need big G’s Cloud TPUs to do anything interesting. But we are getting there.

Google’s biggest push has been it’s Assistant integrated in products such as Google Home, Google Keyboard etc. It uses AI/ML to make witty suggestions and make your life slightly easier. Problem with that is that It must know sooooooo much about you. This inevitably raises privacy concerns. But we all know that privacy is now a phantasmagoria, so we might as well forget about it.

The other big push is use of voice interfaces in small computing devices. Tech companies want us to interact with computers in similar ways that humans communicate with each other. Amazon has Echo and Google has Home. Apple is rumoured to release their own. This calls for advances in speech-to-text recognition and natural language processing which again needs serious ML/AI.

Fancy it might be, I still think that there’s nothing that beats the GUI — buttons, icons, images and text. I think we should be putting more efforts in advancing better UIs(which still suck) than making voice recognition better for one reason; Voice is an invisible interface that requires prior knowledge of input by the user for the computer to understand and process. For instance, you specifically have to say “Hello Google, what’s the weather today”…to get weather info and anything missing might return false or no results. Voice is like making ordinary users work with the Linux command line. It’s terrible.

However, voice might be useful in particular use cases; mainly those that make your hands indispensable; like when driving, washing, cooking, baby seating etc.

Other thing that caught my attention is Android Go. It’s like Android Lite for low-end smartphones. I feel Google has done much talk, less action in catering for developing markets where connectivity and big phone specs are issues. I’ve been a big critic of Google’s project link because till now there’s been ABSOLUTELY no substantial change in data costs. On increasing smartphone penetration, Chinese vendors like Tecno, Infinix, Oppo, Xiaomi have done far more than Google’s promised Android One (anyone remembers that?) project.

Granted, Google created Android and freely licensed it, but Chinese vendors have tweaked and optimized it for low-end devices. With yesterday’s announcement, It’s good to know that devices with less than 1GB of RAM will by default run on Android Go configuration which is optimized for low-end devices.

What Google should do

I feel Google missed out on tackling about three important things;

Fake news: Following the past US elections, fake news is now a global problem that should urgently be addressed. Being the gatekeeper to the World’s information, Google is in some ways responsible to ensuring that its users get the most accurate information. Even though Google last month announced that it was working on tools that allow users to flag fake news, nothing of the sort of was mentioned at i/o.

Ad blockers: It’s no secret that the biggest revenue of consumer internet companies is online Ads. However, online Ads have had a bad rap with internet users who see them as intrusive and sometimes infringe on their privacy. As a result, a new rebellious movement that blocks all Ads on websites they visit has emerged. This of course is a direct threat to not only Google but to thousands of online publishers whose business model is largely dependant on Ads. It seems Google has not found a solution to this yet.

Publishers: The internet is a wide ecosystem of internet publishers and consumers. Publishers freely create content such as blogs, Youtube videos, Apps, Games for consumers but are compensated for their efforts via Ad-supported networks — the biggest of which is run by Google. According to a Gartner report, less less than 1 percent of Android apps are “financially successful”. The majority of the Apps cost either less than %1 or are Free to download. Even worse is that users now download less Apps because of “App fatigue” and instead resort to using the most common ones; Facebook, Twitter, Gmail, Whatsapp etc. This is obviously good for users, but not for developers. Google must use its massive Tech arsenal to address these challenges for a healthy ecosystem.