A Samsung phone with an AMOLED screen is intriguing. Of course, you know that. Let’s now think of the perfect description to give a Samsung smartphone with two AMOLED panels. I can bet all the adjectives you’ve got in mind fits the picture. From Samsung’s perspective though, the best qualification to give this device is ultra-premium! The ultra-premium smartphone in this context is the Samsung W2019.

Samsung W2019 is a flip phone that carries flagship properties in and out. Naturally, being a flip phone, specs of feature phones would have been expected. But as Samsung will have it, the specs are not only top-notch, they are also very classy.

Without further ado, let’s check out the stand-out features of this smartphone.

On the outside, diamond-cut aluminium and glass team up to give the Samsung W2019 a solidified appearance. These components coupled with the entire device features makes sure the phone is 17.3mm thick. Well, that’s some statement about doggedness. Also, Corning Gorilla Glass delivers protective strength to the phone.

Still, on the outward features, a fingerprint sensor takes up the smartphone’s right side position. Bixby button that controls the phone’s assistant (Bixby) is found at the other side. Dual cameras are present at the back to complete the attractive physique of the smartphone. 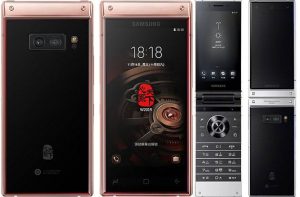 When the clamshell is shut, a 4.2-inch Super AMOLED screen is positioned to serve as one of the displays. Once the phone is flipped open, another screen of the same size and quality is also available. A Full HD resolution of 1080 x 2160 pixels fashions out the multimedia goodness of both touchscreens.

In the phone’s opened position, the T9 numeric keypads and directional buttons become noticeable. This doesn’t affect the appearance of the Android navigation buttons on the two Super AMOLED displays. An average 16:9 is the aspect ratio of the phone’s screens.

As you must have guessed from the heading, the Qualcomm Snapdragon 845 chipset is in charge. Made up of Octa-core Kryo processors, the chipset runs at 2.8GHz speed to command smooth performance. A 6GB LPDDR4X RAM is lined up together with it for its actions.

Completing the memory section is a 128GB ROM although a larger variant of 256GB storage also exists. Even at that, Samsung W2019’s storage can be expanded to 512GB by employing a MicroSD card. Unfortunately, Android 9.0 Pie isn’t the software aboard. Instead, the OS aboard is the Android 8.1 Oreo OS, but an update is inevitable. 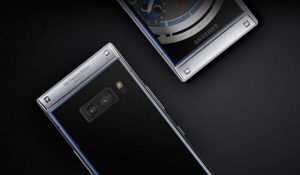 Samsung W2019 sports a 3,070mAh Li-Po battery. Added to this, the phone fast charges through a Type-C USB port. No 3.5mm headphone jack is available, so a USB-C to 3.5mm adapter can be utilised.

The phone is available in Rose Gold and Silver colours. It’s currently available in China at an exclusive price of $2,700.