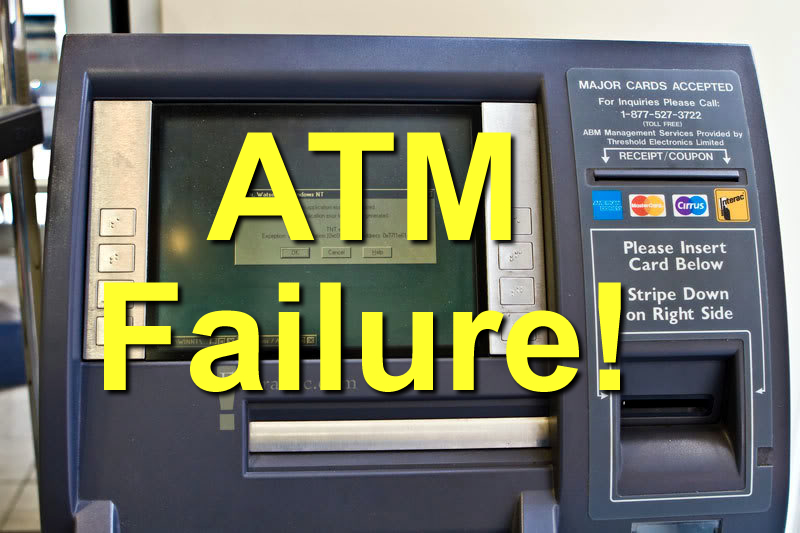 It was yesterday the 2nd of September when it rained annoyingly for hours never seeming to stop. Worst of all, it started in the evening during rush hour just after 4:45pm when most people start leaving work. I had earlier made an appointment with someone that I was supposed to meet at 6.00pm on 6th street Industrial area. As is the norm in Kampala, when it rains, traffic jam just starts instantaneously. Hurriedly, I left my work place and got onto a boda boda (Motorbike) so that I beat the jam and make it in time for the appointment for which I had agreed to pay 6,000 shillings. On the way, I noticed that I had left the money on my desk. It was getting late and consequently I decided that I would head to the closest Equity bank branch ATM which was in Wandegeya.

We managed to snake through the traffic jam right to the ATM. I quickly inserted my card only to get a message that read, “Out of service, please go to the next branch.” On seeing this, I didn’t bother to even enter the bank which was then still open. I got onto the Boda – Boda which was still waiting for me. I decided that we head to the Equity bank ATM near Spear Motors on Jinja road since it was along the route to 6th street. My Boda-Boda rider was a skillful expert that knew all shortcuts and could dodge through very heavy traffic.
We finally got to the Jinja road Equity bank and I quickly dashed to the ATM but on my way in, I got a gentleman heading out shouting angrily but I didn’t care to listen. On inserting the ATM card, I got the same message, “Out of service, please go to the next branch.”

At this point it started dawning on me that may be all the ATM machines are down. However, I kept faith and told him to proceed to Oasis Mall which too has an Equity bank ATM and the bank closes at 9.00pm daily. So as we ensued, the Boda-Boda rider kept mumbling that I had to pay him 10,000 shillings since we had moved a lot. He then told me that I had to pay him or else he takes my phone. At this point my heart was pounding because this was my last option and it was 6.15pm already. 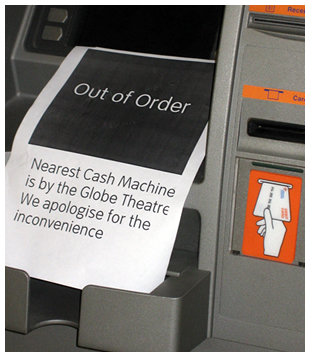 We sped off to the Oasis Mall parking where I got off the bike like a ninja and headed straight to the ATM. Even before I could enter the ATM room, it was evident that I was doomed; because I found so many disappointed cursing faces. I have always been the lucky guy, so I thought, why not try my luck. So I inserted my card but I wasn’t lucky this time. At this instant, I started shivering because I was truly “cooked.” I then headed into the bank but I found a mammoth crowd of clients so heated and complaining. From the squabbling, I got to learn that even the bank had network failure and the clients couldn’t withdraw off the counter as the tellers looked helplessly at the fuming clients.

Here I was already late for my appointment contemplating whether I should just run off through the alternate exit because by this time, my bill was clearly not 10,000 shillings anymore (but my Mama taught me better). I quickly checked my phone which didn’t have any credit either. At this point, I wished I could meet someone I knew heading to the supermarket to bail me out but this was to no avail. Now you know how “cooked” I was.

After a few minutes of thinking, I remembered that my ATM card was VISA enabled. I then hurriedly run up the escalator heading straight to the Crane Bank ATM but my drama was not about to end as it too gave me the same message like the earlier one. I then tried my luck at the Ecobank and KCB bank ATMs but still got the same message. At this point I was so puzzled!

Remember I told you that am a lucky guy, right? Well, I decided to try out the Barclay’s Bank ATM as a last resort which to my delight accepted my card and coughed out the amount I punched in though at a cost of 6,500 shilling as VISA transaction fees. I cannot begin to describe the relief, peace and joy I had. At this point I didn’t really care how much the charge was (though I do now).

I bet by this time the Boda-Boda rider thought I had conned him as I had spent close to 10 minutes. So I run towards him then we immediately headed to my destination; 6th street. As we approached the roundabout towards Industrial area, he told me that my bill was now12,000 because we had moved a lot and he had waited too long. I tried to bargain but he refused to reduce so we settled for 12,000 shillings.

On reaching the venue for the meeting, the gentleman had moved out. I then had to use the same bike to look for airtime, We moved to 7th street and luckily found airtime then I called my appointment who then told me where to find him which was also quite a distance away. To cut it short, I was able to meet the person and I bargained with the Boda -Boda rider who settled for 13,500 shillings which I paid.

Today I reached office and started to recap what happened after seeing the money I had forgotten on my desk. Because of the ATM failure, I had to pay 13,500 shillings instead of 6,000 on top of the VISA transaction fee of 6,500 shillings. I wonder if there is a way I can claim this money back.

Well, the semantics behind the story is that we are all so dependent on technology and forget that even technology can fail us at the time when we badly need it to be our ally. I never thought this would ever happen to me. It taught me a lesson. On the flip side, it was still technology that helped me out when another had let me out.

8 thoughts on “The day when my ATM card failed me”