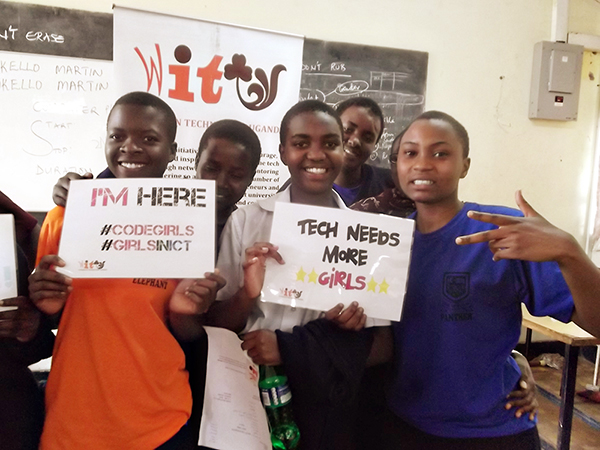 Whether you think its simply a stereotype or actually a reality, the notion that “girls don’t code” has haunted the IT industry almost since its inception. It’s rare to find a girl among a pack of male coders either crunching an Enterprise App or simply having fun with bottles of coke and cookies on a Saturday afternoon.

With this backdrop, a lot of initiatives have been started to reverse this trend. The idea is to gather a group of girls together and train them to code, connect them to mentors who have been coding. The effect of such an endeavor (hopefully) is that the marginalized group benefits from the synergy created through a community of girls chasing after a common goal.

Living examples of this move is GirlGeekKampala, an organization based in Kampala Uganda that teaches young Ugandan women the computer programming languages and content management frameworks. The Girl geeks hold programming hackathons occasionally with of hope of turning girls into code Ninjas with the levels of technical skills that makes them well qualified for highly contested technical positions in big Tech companies or Startups. Others include Women in Tech Uganda (WITU),   Girls Who Code, based in New York City, and Black Girls Code, in San Francisco.

One of such girls who is a product of these initiatives is Lynn Kirabo, now a masters student with Carnegie Mellon University Rwanda. This is her experience with the whole craft;

I LOVE it!! I love coding even the whole bug troubleshooting process. I have loved coding since I was a little girl fascinated by computers.

Like any other thing, there are days when it is hard and on those particular days, I sometimes find myself wondering what exactly I signed up for. Or those moments when you read a project definition and wonder to yourself, “ Huh?? What on earth is going on? Where do I start?” But once I get started, it’s forward motion from then on.

But why is it hard to find a girl crunching away Java code for an Android App or editing a combination of HTML and CSS files for a simple web application?

To answer this question, I sought to speak to a number of girls who are already breaking barriers and contravening existing stereotypes in the field. Lynn Asiimwe, a computer engineer who now works with Access Mobile at Hive Colab in Kampala and maintains a fairly technical blog thinks that most girls don’t have character traits that make good programmers. She says;

Coding requires lots and lots of persistence and resilience. You’ve to spend hundreds if not thousands of hours just trying to debug an error in a specific piece of code. Most girls just don’t have that kind of patience and persistence.

Lynn is right about one thing — coding needs patience and perseverance. Programming requires writing a set of computer instructions line by line that sometimes spiral to thousands of lines of code for even the most basic functional computer applications. But what will keep you awake the whole night is finding a misplaced comma in a forest of texts of code that’s crashing the whole application.

But don’t girls already exhibit these character traits in other areas of their lives?

The answer is yes they do. But according to Lynn, they simply don’t transfer this kind of discipline to the harness their coding skills. Lynn also adds that girls who are trying to wet their feet with code don’t have social support that their male counterparts enjoy. She says;

We don’t have fellow cheer leaders. You end up hustling with this web service API alone without a fellow girl to help you out. That’s demoralizing!

Kirabo from Rwanda seems to allude to the same point of moral support needed among fellow females;

Boys have had a lot of practice at this and as such are quite ahead. This doesn’t mean that girls cannot do this, it’s just that we shall have a lot more hard work and commitment to put in.

If we learn to encourage and spur each other on, share our ideas with each other, then we have a semblance of a chance!

It also goes without saying that societal expectations on the girl child are a lot different from the boys. Staying up whole night coding away on an App or heading home late does raise a lot of questions from concerned parents or spouses.

However, with all these challenges, there are ladies that have actually made it in the Tech space. Christine Ampaire, the product lead of Mafutago, a fuel price comparison App and Terry Karungi, lead at Kola Studios, the startup behind Matatu act as a beckon of hope for aspiring girl geeks in Africa.