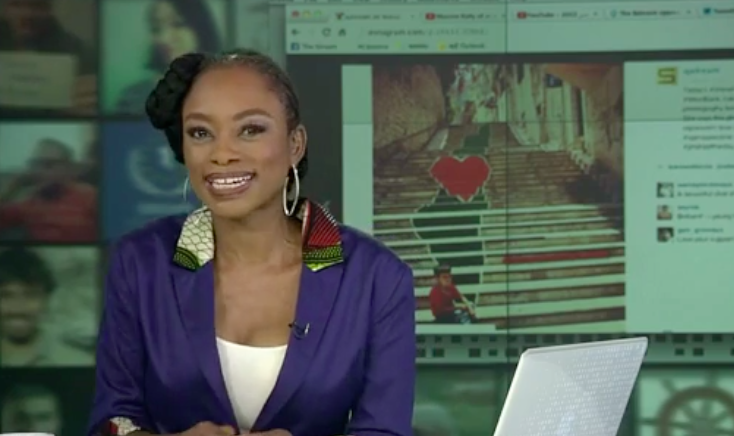 Africa has been at the forefront of using Web 2.0 technologies to bring about radical change in her own future. The continent has particularly used social media to cause a quantum shift in economical, social and  (mostly) political spheres.

British by birth, Nigerian by parentage and a Washingtonian by zip code, Femi is currently host of The Stream on Al Jazeera English. As a web community with its own daily TV show, The Stream‘s award-winning approach taps into the extraordinary potential of individuals through social networks and has attracted a large African following.

The former Nigerian media personality of the year Femi Oke was a keynote speaker and panel host at Social Media Week Lagos from 17-21 February 2014. We caught up with her over email to get her perspective into how Africa is harnessing the web to tell her stories to the world.

TechPost: The Stream has been branded as a “Web community With a Global TV Show.” What’s the intersection of Web and TV today and how are you finding that intersection?

Femi: It’s getting harder to find the intersection between web and TV nowadays.  I remember a time when television producers would arrogantly make a distinction between working for television and those upstarts online.  Now try and find a broadcast show that doesn’t have a Facebook page, Twitter following and special content online. You don’t even have to turn on your TV to watch TV, because so much content exists independently online.  I stream virtually everything I watch. In fact I’m typing this with my email open in one corner of my screen and Al Jazeera in the other!

TechPost: Social media has had an explosive growth in the continent of Africa. How is Al Jazeera tapping into this growth to tell stories in a way never achieved before with The Stream?

Femi: You could say that The Stream exists because of the explosive growth of social media in Africa. The show was inspired by the Arab Spring in North Africa and how online communities organised themselves to bring about historic change.  We tapped into their conversations and made the show global. Without those audacious users of social media three years ago, I doubt any of us would have realised its incredible power. We’re already in this stream of information with our community, online and on the air.  It’s the offline world that’s tapping into us, to find stories and conversations that are unique and people driven.

TechPost: How does Al Jazeera validate stories that it aggregates from online users? Wouldn’t it be dangerous to simply take in everything that users say without some kind of fact verification?

Femi: We don’t aggregate stories from our online community; we report them. Not for one minute do we stop being journalists. We investigate everything the same way, regardless of how we found it.  Stories have to have more than one source and we dig around, make calls and investigate before going to air or online. We’re not Twitter; we don’t just press the retweet button.

TechPost: In your own opinion, how can Africans better tell their narrative to the world with modern technology?

Femi: Look around: Africans are already doing it.  Social media allows us to totally bypass traditional media gatekeepers. When it comes to Africans telling their own narratives, how they want to be represented, that’s a good thing.