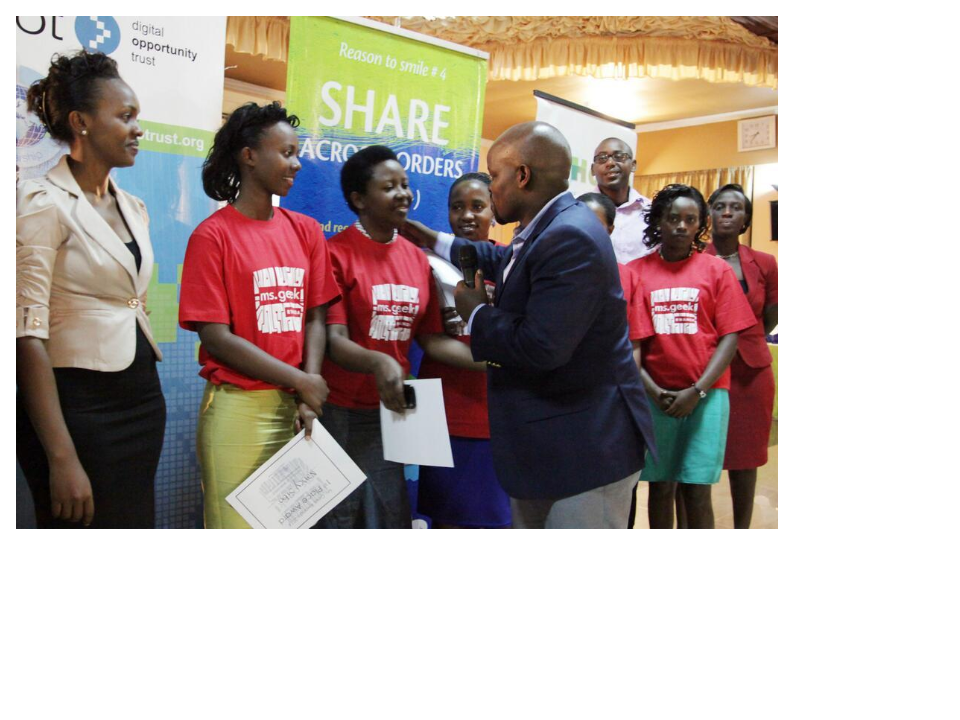 On Saturday 8th of March, International Women’s Day, Girls In ICT Rwanda held the first ever Ms. Geek Rwanda competition at Lemigo Hotel. Ms. Geek Rwanda is a competition for Rwandan women encouraging them to showcase their knowledge and skills in ICT and this year the competition was open exclusively to university students.

The 5 finalists were then invited to begin pitching their projects:

After each individual pitch, the panelists had an opportunity to ask questions and made comments. The 5 panelists were Lucy Mbabazi, the President of Girls In ICT Rwanda who works at Visa, in charge of Emerging Market Solutions at Visa; Kaneza Innocent, the Senior Consultant and Lead Developer of Esicia Ltd; Louise Kayonga, the Registrar General at RDB; Alex Ntale, the Director of the ICT Chamber Secretariat in the Private Sector Federation; and Evelyn Namara who works at Beyonic as the Regional Manager of East Africa.

“If boys can do it, girls can do it even better!” that was the punchline from Evelyn Namara, the keynote speaker at the Ms. Geek Rwanda competition.  She applauded all the students for their skills and creativity and predicted that their actions would inspire others to pursue their dreams.

After the Key Note speech, Akaliza Keza Gara, a member of Girls in ICT Rwanda, announced the winners. Gara remarked that the People’s Choice Award, which was decided through an online vote sponsored by the Akilah Institute for Women, received over 700 votes from around the world. The winner of the People’s Choice Award was Chantal Mukundwa, the student behind the Nearby Item Locator System. The 3rd place prize went to Josephine Tujyimbere who designed the Class Attendance Management System. Second place went Christine Bayizere, for her Wireless Black Box.

In first place, and the first ever to receive the title of Ms. Geek Rwanda was Nancy Sibo, who pitched the Mobile Cow application.

As a Top 5 finalist, Eline Nyirangirimana, an ICT student was also recognised for her proposal, the Online Driving License Examination System. All the finalists received the certificates, which were presented to them by Lucy Mbabazi.

At the close of the ceremony, attendees were a pleasantly surprised by the arrival of the Minister of Youth & ICT, who made a special effort to be at the event to congratulate each other winners. He wished everyone a happy Women’s Day and brought with greetings from the President of Rwanda and the First Lady who were with him at the government retreat. He said that the finalists would not only transform the country but the continent and that the next Ms. Geek Rwanda event should be even bigger and better.

Girls In ICT Rwanda is a group of women of all ages working in the field ICT including entrepreneurs, professionals and students. The event was attended by a diverse mix of representatives of both the education and ICT sectors from within and outside Rwanda.