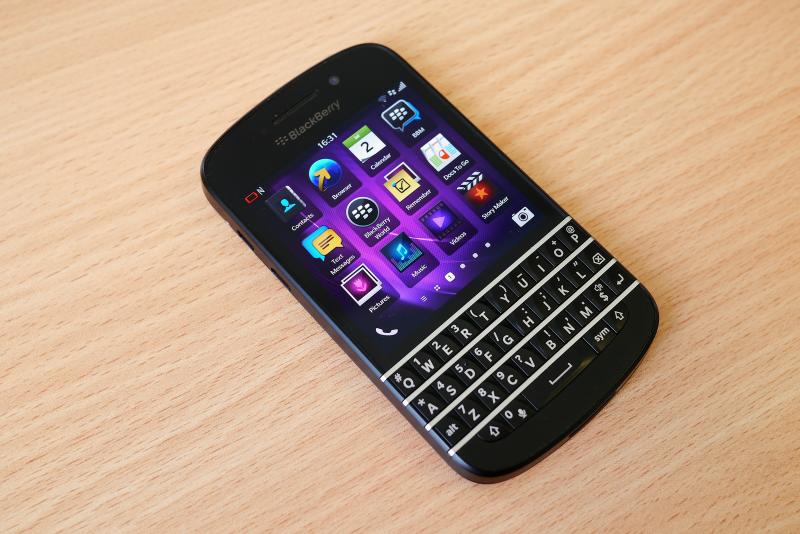 Just when you thought that Blackberry is a sinking ship and is increasingly receding to the back of our memory as new smartphone players begin to dominate the headlines, the smartphone vendor releases a new device called Blackberry Porsche.

That is a sign that the once beloved smartphone king isn’t conceding defeat anytime soon and continues to provide it’s legendary data services in partnership with local networks. MTN Uganda, Uganda Telecom and Airtel Uganda have long offered Blackberry services. In fact MTN recently rebooted its Blackberry service which includes a fresh release of the latest BB devices and data plans that are geared towards keeping you online.

We can’t of course neglect the onslaught of new players such as Samsung with flagships such as the Galaxy S5, Apple with the iPhone 6, Nokia (now Microsoft Mobile) with the Lumia line of devices which are all now gracing smartphone shelves in Telecom and vendor stores around town.

With multiple services integrated into Mobile Operating Systems such as Android, iOS and Windows Phone, Blackberry services are no longer the envy of many as it was in the olden days. Nevertheless, there remains a remnant of Blackberry diehards that the Telecoms continue to support.

The Social Plan gives  you unlimited access to legendary BlackBerry core services we’ve all come to love such as Messenger, BlackBerry Email, BlackBerry App world and then Social networking like Facebook, Twitter, LinkedIn, Foursquare and lots more. This plan is going for Ugx 1,000 per day and Ugx 20,000 per month.

The Complete plans is like the Social Plan with Instant messaging added (MSN, Whatsapp, Google chat and more) and one web based email account. There’s very little difference between this plan and the Social Plan that doesn’t really warrant a package of its own. This plan is going for Ugx 1,500 per day and Ugx 30,000 per month.

The Absolute Plan is more suited for business customers since it comes with 10 web based email accounts, BlackBerry Protect and BlackBerry Enterprise Server Express on top of what the Complete and Social Plan offer. This plan is going for Ugx 1,500 per day and Ugx 60,000 per month.

When it comes to Blackberry devices, MTN will spoil you with device choices and comparatively, prices too. The network is offering the high-end Blackberry Z10 for UGX 1,340,000 which comes with 3GB data valid for 3 months while low-end Blackberries such as the 9320 is going for UGX 439,000.

You can access the MTN Uganda Blackberry services by dialing USSD code *150*4#.

When Blackberry was disrupted by Apple in 2007 with the introduction of the iPhone, the company has since shelved its consumer-centric business and has moved more up market to meet the needs of large companies. It does this with the BES service which integrates with existing organisation I.T systems such as Microsoft Exchange Server, Lotus Domino or Novell Groupwise and also provides a  centralized control of Blackberry handsets for all your employees.

The BIS service is tailored more towards individual users and small businesses. Therefore there’s no Blackberry server as the BES service. With the BIS,  you can access up to 10 Email accounts using advanced BlackBerry push Email technology where the user is always connected to his Email.

Just like MTN, Airtel is also offering BlackBerry Social Plan and BlackBerry Complete Plan which are both cheaper than the BIS service but adds BlackBerry Roaming which allows you to use your BlackBerry Service in over 56 countries and with more than 140 operators.

Airtel is offering both daily and monthly payment options. For instance Social is going for Ugx 1,000 while Complete Ugx 1,500  and BIS for Ugx 3,000 per day. You can click here for the full pricing structure.

In terms of devices, Airtel has a wide range of Blackberry devices including the high-end Blackberry z10 going for Ugx 1,950,000 that comes with 1.5GB valid for 3 months and Low end Blackberries such the 9320 for Ugx 650,000. As you can tell, Airtel is a lot more expensive than what MTN is offering for the same devices.

You can access the Airtel Uganda Blackberry services by dialing USSD code *145#.

UTL also offers Blackberry social and Blackberry complete although compared to BIS, the service difference is really very subtle even though there’s a sizeable pricing structure. For instance Social is going for Ugx 1,000 while Complete Ugx 1,500  and BIS for Ugx 3,000 per day which isn’t any different from what Airtel is giving. In other words, you’re better off with BIS than going for Blackberry Social or Complete packages. 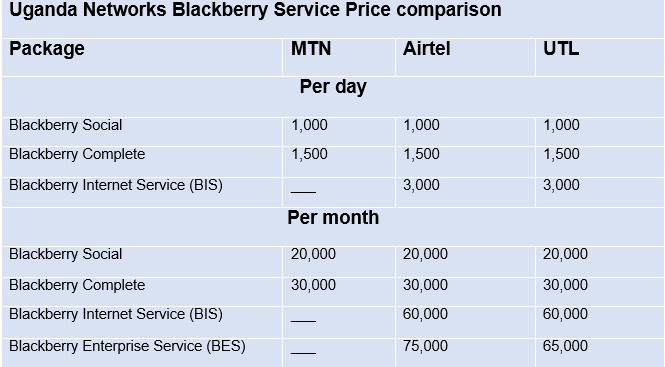 As you can tell from the chart, the telecoms are offering competitive price packages for their Blackberry services. Orange Uganda isn’t on the list because even though they support Blackberry services, they are not as competitive as the other 3 networks. MTN decided to incorporate enterprise features in its Blackberry Absolute  Plan which is going for Ugx 60,000/month while UTL and Airtel have packaged enterprise features in the  Blackberry Enterprise Service (BES) costing a little more at Ugx 65,000 and Ugx 75,000 respectively.

In terms of price, the networks equalize, which then leaves you with other aspects of service delivery when making the final choice. For instance, on devices, if you’re buying from the telecoms, MTN seems to beat Airtel when it comes to the cost of devices.

Even though not in its glory days, Blackberry services still remain very popular especially among enterprise/business customers. Blackberry Enterprise Services in particular meet the needs of enterprise users who are more conscious about security, integration with existing I.T infrastructure and platforms. Blackberries latest devices such as the Q10 and Z10 bundled with the latest Blackberry Operating System further make them extremely competitive with Android, Windows Phone and iOS based devices. Although, there’s no denying the impact on overall market share that competitor platforms have had on sector that was previously exclusively dominated by Blackberry.