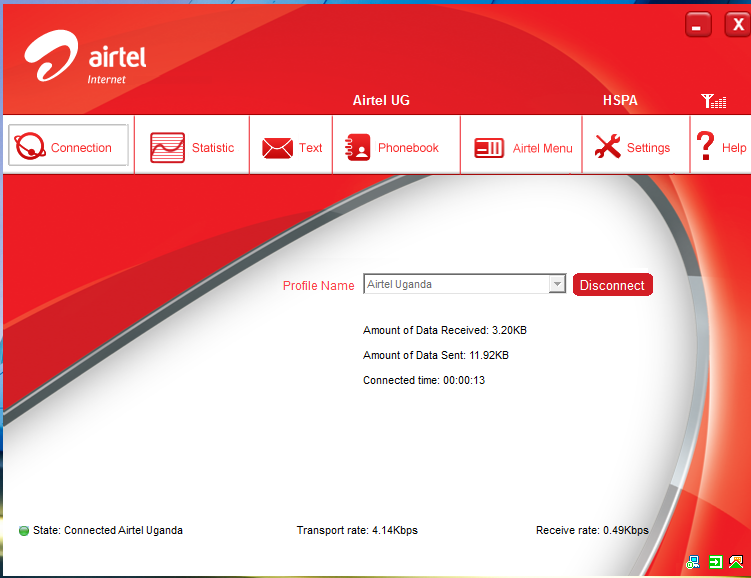 David OkwiiUpdated on 03/09/2015
It’s fast approaching one month since I walked into the Airtel shop on Jinja Road to plug myself into a data pipe that Airtel says “will blow you away”. This came after attending the Airtel 3.75G tweetup in town which was packed by high-tech savvy professionals waiting to quench their never ending thirst for super fast internet speeds. Despite a breaking Wi-Fi hotspots powered by Airtel’s 3.75G, I decided to give it a try.

I bought a ZTE MF190 USB modem at UGX 60,000 which comes with 500MB of [free] startup data. I also used the device on both Windows and Linux platforms. For this post, I mostly have screenshots from the Linux software version, but it’s all the same!
So without farther ado, lets get right into it. 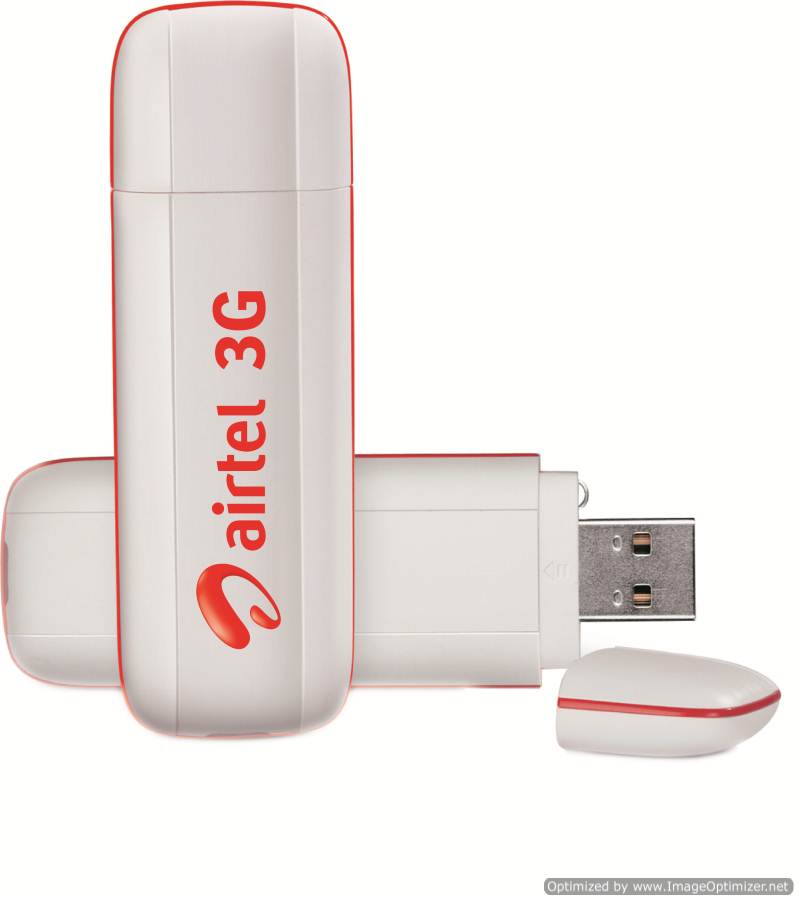 It’s not trivial! There’s nothing fancy about this and not much tech anyway. However, this is the first thing that you’ll do when you just bought any piece of technology. You are full of anxiety and just can’t wait to try out your new found hunt. So I got the modem, unboxed it and plugged it right into one of free USB ports anxious to tweet my preliminary experience with the 3.75G link.

As with most gadgets, there’s usually a setup process which involves installing some sort of software/drivers that will enable your device to work with your computer. Once you plug the device in, then some wizard of sorts fires up immediately to which you just click the “Next” buttons and then “Finish”. However, I was little surprised that with the Airtel modem. I didn’t get a pop-up wizard. Rather I had to navigate to a “windows” folder and look for the setup file which was all  simple. Because the device supports multiple platforms (Windows, Linux, Mac) that layer in the setup process is almost inevitable.

It’s was now time to get the engine started and the flywheel spinning. Once the modem is in and the software is running, all you need to do is hit the “Connect” button.

Once connected, the software(on the Home page) displays your link speeds in Kbps so you know just how fast the wheel is spinning and how much data you’ve consumed for that particular session. We shall get to speeds later, but for now, all you care about is getting online and system won’t get in your way! Awesome. 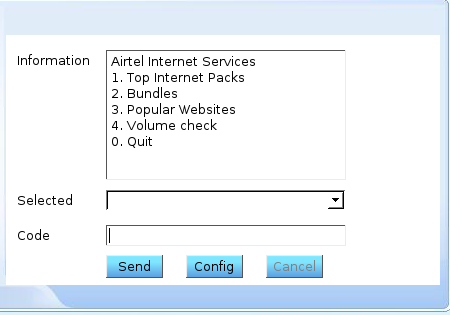 By now, I’ve already opened about 5 different tabs including Gmail, Twitter, Facebook, Wikipedia and this blog. After exchanging a few rounds of emails, tweeting, reading my news feed on facebook and getting up and running with what’s happening around the world using my news aggregator, it was time to slow down and find out just how much data I had consumed.

Data capping is not something am particularly NOT a fan of. However, it also instills a certain discipline of consumption — but we shall talk about this in the latter posts. To find out how much you’ve consumed so far, you go the “Airtel Menu”. Type *175# and as you can see, you are presented with a menu similar that one you get on your phone when you send a USSD code like *175# and then follow the instructions. For this case you type option “4” and you’ll know how much you’ve spent so far. It’s rather disturbing that the software designed to work on desktop computers works as if it was running on a feature phone. 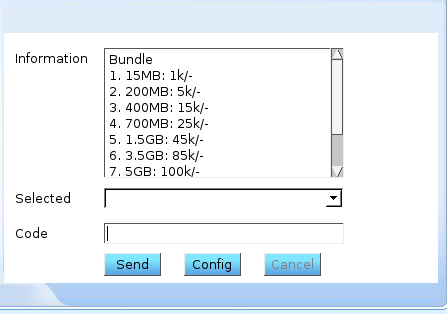 Since the modem comes with 500MB of free data, you can even enter cruise control until you realize you are out of fuel! For a power user, 500MB on a computer takes about 2 weeks while for the average user,  it should take a week or less. For my case it took 4 days(even under cautious use) before I had to reload or buy another bundle.

Much as the cost of internet data is still over the roof in Uganda. Relative to other carriers, Airtel Uganda still has the lowest rates as seen in the screenshot above. For the same cost, Airtel gives you twice as much data as the competition and for that, they get another +1. MTN Uganda for instance gives 20MB/day for 500/=, yet for the same amount, you get 60MB from Airtel.

Reloading
This is where I felt like running away from Airtel. First, Airtel makes no distinction between data and voice unlike other operators like MTN. That is, if your data bundle runs out, the system automatically transfers you to pay-as-you-go billing which charges 0.3/= per kB, thus if you had some airtime for voice calls, you may be greeted by the “you don’t have enough credit to make this call” lady on the other side of the line! That’s absolutely annoying. On MTN, once your bundle runs out, you’ve the option of allowing the system to bill your regular voice credit otherwise the system won’t simply enable you to surf — as expected! 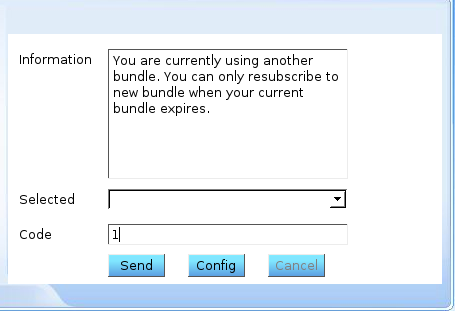 Secondly, in case you want to add more data, the system won’t allow you until you finish the existing bundle! This is very counter-intuitive and unexpected. Imagine if you tried to reload your voice credits only for the system to assure you that you already have some credit and that you must first finish that! Completely unbelievable.This is to me the worst part of their data service.

I won’t lie to you. I can’t authoritatively say whether or not Airtel lives up to it’s promise of 21Mbps. To test this, I needed to download a 700MB file and use a couple of speed test tools and websites, but this was too expensive for me. However, based on my casual browsing experience, the speeds seemed to live up the hype. Opening a webpage takes no less that 3-5 seconds to fully load all the content and to me that’s not enough time to get my mind to slip off to other things while waiting for the page to load.
The software also indicates UMTS or HSPA which are both 3G standards meaning that most of the time, I was actually connected to a 3G link.

But there were some blue days too when the  system falls back to EDGE and that is super slow. Well, I chanced on this screenshot just once which is a good sign that you’ll be on a 3G link most of the time.

Customer care
Unbeatable! Yeah, Airtel has some impressive customer care channels which includes not just the de-factor toll-free line, but also social media channels like twitter and Facebook. You can get through to them using either of the following;
Twitter: @Airtel_Ug, @Den_Airtel_Ug
Facebook (Denis Airtel Uganda)
BBM: 298CA067
Whatsapp: +256752600830
Viber:+256752600830
Yahoo: [email protected]
As such i’ve never used the toll-free line as i get instant response through the twitter channel. 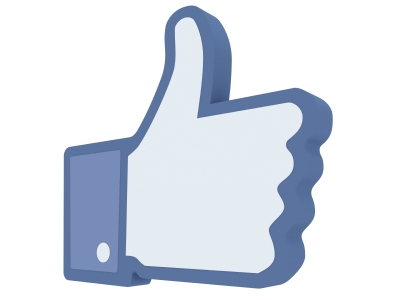 Yes, it’s kind of annoying, but go get it! Airtel data offering excels at being cheap relative to other service providers and the network is reliable too. Currently Orange Uganda is the lion in data having led the mobile data revolution about 3 years ago. However, Airtel’s data service will give Orange a run for it’s money with its 3.75G network, relatively cheap 3G modems, great customer care and the lowest data rates.