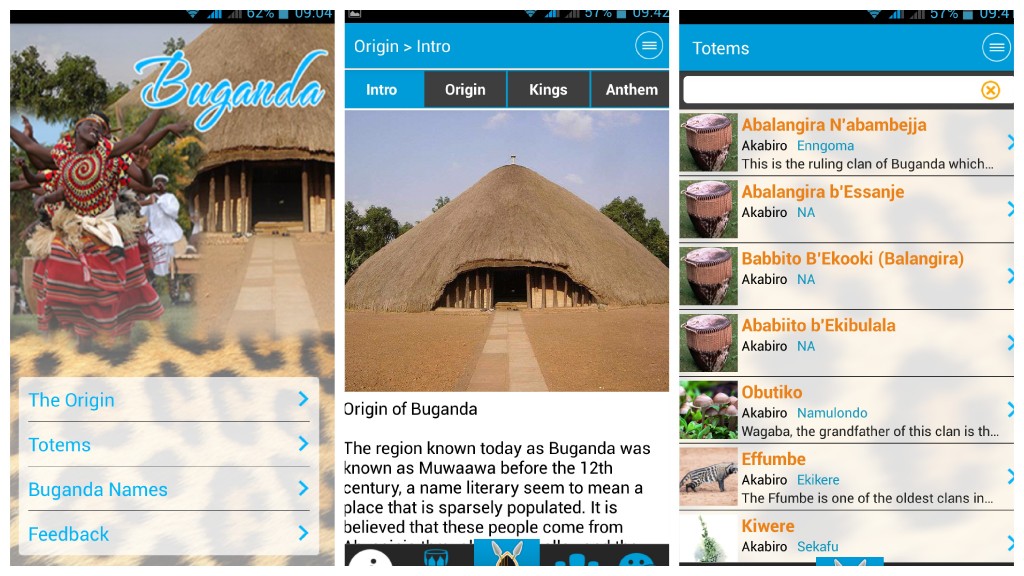 Buganda is one of the many kingdoms in Uganda, a multi – ethnic nation with over 40 tribes. It also is one of the most pronounced and popular kingdoms with Tooro, Busoga and Bunyoro kingdom closely following.

Buganda is also the first Kingdom to have an app developed. (We cannot confirm if the app was commissioned by the Kingdom or if it was someone’s personal or commercial project) by Epearl LLC.

The Buganda Kingdom app is smooth and easy to use and navigate. One can get around with just a few swipes and taps. The app also has ads which are a little nagging but that seems to keep the app economy running.

The landing page has a background image of women dancing, the Royal Tombs and a leopard skin. On the landing page are buttons to help you navigate around the app. The buttons are Origin, Totems, Buganda Names and Feedback.

The Origins tab takes you to a page where you can read an introduction or brief history of Buganda. In another tab on the same page, it will show you the origins of the Buganda clans, the Kings of Buganda and lastly the anthem. There’s a play button enabling you to play the anthem and sing along with the lyrics.

The second button shows you the Buganda totems. According to Wikipedia, “ A totem is a spirit being, sacred object, or symbol that serves as an emblem of a group of people, such as a family, clan, lineage, or tribe. The totemic symbol may serve as a reminder of the kin group’s ancestry or mythic past”

Different Buganda clans have different totems. According to the app, there are 32 totems in total, which have been taken on overtime. For instance having the lion for a Totem came about when King Kintu hunted lions and ate them. They made him and his family very sick and from then on, he declared that no one should eat lions. It’s from then on that a particular clan got the lion for a totem. The app also allows you to share your totem or turn it into a widget.

The app also explores Buganda names. We are not sure if  all Buganda names are there, but it sure details names showing the gender and totem. When you click on the name, it’s supposed to give you either the meaning or origin but that doesn’t seem to work yet.

The app is well designed with a lot of information on the culture and people of Buganda. The developers of the app could use better images to help make the experience better. Most of the information on the app needs editing for grammatical errors and historical accuracy.

The Epearl team is currently working on the iOS version but for now, you can download the Android version