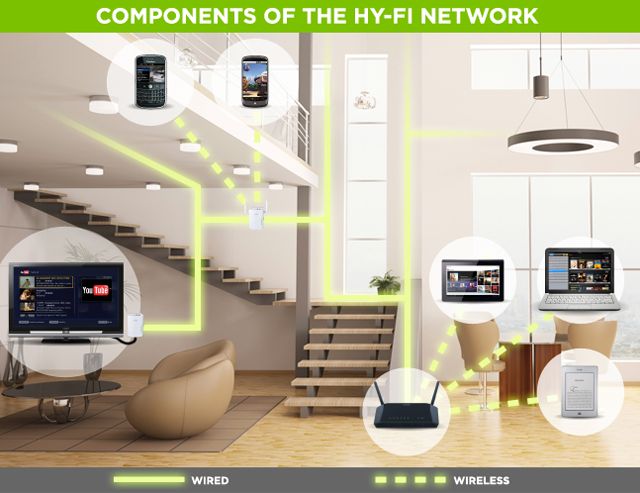 No single connectivity technology has 100% coverage in every region of every home but this hybrid proves to have the potential to connect you all home at 100%, in all corners.

It sounds like a solution looking for a problem. A technology that allows networked devices in the home connected by different network media to operate as if they were connected across a single medium.

Yes its true,  TCP/IP already allows you to do that, routing packets from, network attached storage linked to a router over an Ethernet cord across to a TV that might be linked to the router wirelessly or over a power line bridge.

Basically the 1905.1 specifies the capabilities of firmware that sits just above a network device’s MAC layer. It’s able to seek out other, compatible devices on the network to learn what connections they have available to them and what hosts they’re attached to. Data throughput sampling facilities allow 1905.1 devices to report on the quality of their active links.

Lets take an example like  a TV connected via a router to an online content source will receive that content over whichever network medium it has that is most appropriate.

“Packets can arrive and be transmitted over any interface, regardless of the upper protocol layers or underlying network technology,” is how the IEEE puts it. An example: the 1905.1 software in the router might choose to deliver the content – a streamed film, says – to the TV over a Wi-Fi link because that provides the best throughput.

Should other wirelessly connected devices join the network and start drawing capacity away from the wireless link to TV, the router can seamlessly switch the television stream to an Ethernet connection instead. Likewise, if one link suddenly drops out, 1905.1 can switch the packets onto an alternative medium.

This kind of sharing of data is 100% among the new comers and the originals on the network… you will not feel the drop in the packets at all.

Also if the user sets up the TV to connect to the router by both Wi-Fi and Ethernet – whether directly over Cat 5 cable, or by way of a pair of powerline adaptors – he or she shouldn’t need to do anything more to maintain the system – the 1905.1 “convergence layer” does all the work

In regard to multiple medias sharing on the same brand width, like if the TV is only connected by Wi-Fi, 1905.1 can move other devices with access to other media off the WLAN.

Even if all the networked devices operate only over wireless links, the IEEE standard’s end‐to‐end quality of service (QoS) provision can give bandwidth priority to the streaming packets bound for the television. Devices with multiple connections can aggregate those connections to boost data transfer speeds.

According to Rajkotia Director Product Management, the 1905.1 operates entirely independently from the application layer, so it makes no differences with your  software and protocols the two devices are using to stream a video, play a song or transfer a file, 1905.1 works to route the data over the most appropriate network medium.

Rajkotia suggests that future versions of the specification may well add other network media like 60GHz WiGig, and also gain Wi-Fi brand, is an obvious contender.

This hybrid would be a necessary evil for most offices in Uganda even if it made for home use because anything that makes sharing easy in an office is welcome in business.

One thought on “IEEE 1905.1,The Future Hybrid Multi Media Networking For Homes”