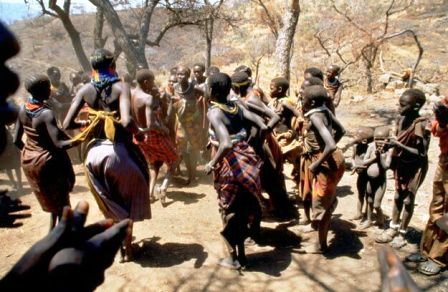 Am an itesot from Kumi district- eastern Uganda. Am proud to be one because Itesots just like other tribes in Uganda  have a very rich culture. A rich way of life. We love to own cattle – a lot of it and cultivate some crops like cassava which is later dried and made into flour. Cassava flour as known as Atapa  is then mingled and eaten with source like ground nuts (Emaido) pasted fish — a very delicious meal you probably want to try out.

In the evening, the itesots gather for a social drink locally called Ajono made from millet and usually discuss community problems in a less serious way. This is where some members also put on their dancing shoes! We also have a unique and cool musical instrument called Akogo which is made from wood and metal strips. You hold it with both hands, the way you do with your iPhone or droid and pluck the metal strips to produce a musical note. I tried once, but i once discovered am not gifted in that area. Then obviously the rich Ateso language, spoken by many itesots mainly in Uganda and some in Kenya.

Up until now, if you’ve been consistently reading, you can easily conclude that am really off topic. No am not. I’ve trying to practically show how we can use technology to preserve culture. I’ve written and documented a few components of the Iteso culture on this blog even though am not really the best person to do it.  This is electronic and can easily be sharable via email, other blogs and various social media platforms we’ve today. I could sit down a little more and create a standard Wikipedia entry. But this is as far as documenting the Iteso culture.

How about the Akogo – the cool musical instrument? The Ugandan music industry has grown in recent years, but I can barely hear any tune from the Akogo instrument! Why? Because it’s not electronic like its competitors the piano or guitar. So music producers and artists find it hard to produce some really cool electronic beats from it.

Now, am ambitious and talented computer scientist or electrical engineer could actually create some notes off this thing or better still create a software based Akogo. I’ve seen some people with pianos on their PCs and smart phones. The apple fan boys know how to play with garage band better. If this can happen, why not with the Akogo?

Moving forward with languages – about 40 or more of them in Uganda alone.  I would think about electronic dictionaries. We already have hard copy versions for some languages which is great start, but hard copy dictionaries can not be electronically manipulated. They can’t be integrated with software to come up with something really interesting.

The Reason why English is so popular and strong isn’t only because we Africans were colonized, but also because it appears in electronic form. It’s in your word processor, it’s on your email client, it’s on your browser, your phone, it’s all over the web. So with dictionaries from which we can build translation systems, it can be possible to browse the web in your local language. I would write this blog in Ateso and you would read it in Luganda, Swahili, Luo by just clicking on the translate button on your browser! Just like the way Google does it when you stumble on a Chinese site.

Now some one may want to slap me out of this wild dreaming back to reality, but before you do, I will remind you that most of what we take for granted today was once considered to be wild dreams. There are some people who have already done some very good work and I can see some information about Ugandan culture on Wikipedia and other websites, but more needs to be done.
As for me, I will start by finishing what i had started on the first paragraph with some guidance from my Dad and perhaps some other itesots.