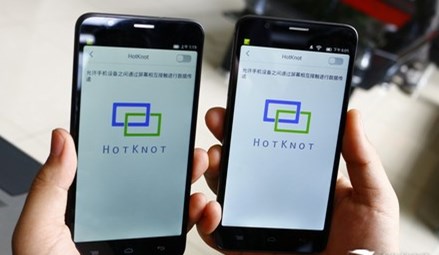 NFC or Near Field Communication is a clever way of sharing data between two smartphones. It’s a short-range wireless communications technology that allows electronic devices to communicate with each other.

NFC has found applications in bus ticketing, remembering passwords, payment systems, connecting to your car, interactive advertising among several others. However, there was only one problem; your smartphone needed an NFC chip. And if you were transferring files to another smartphone, it also needed an NFC chip.

NFC, unlike technologies like Bluetooth and Wi-Fi haven’t gained much mainstream adoption in smartphones and other devices. Even some high-end smartphones like the iPhone, until recently didn’t come pre-built with NFC chip.

But every smartphone has a touchscreen, right?

That’s where Mediatek comes in, a Taiwanese chip manufacturer whose processors powers most Chinese-based smartphone brands like Tecno, Infinix, Oppo among others.

The device chip manufacturer in 2013 devised a clever way of exchanging files between smartphones using only their touchscreens without requiring NFC chip or antennas.

“It utilizes the physics of a capacitive touch screen, such that the transmitting grid in the screen of one phone can interact with the receiving grid in a second when they are in close proximity (less than 1 centimeter).”

The only problem with Hotknot is that it has lower data transfer speeds than NFC. It also has a smaller range than its competitor.

According to Mediatek, Hotknot you can do pretty much anything you would otherwise do with NFC for phone-to-phone data transfer, such as:

Mediatek has an API for HotKnot for device vendors and app developers to take advantage of the Technology. We’ve already seen how the technology works with Infinix and Tecno smartphones.

One thought on “Forget NFC, Hotknot makes you transfer and share files using your smartphone’s touchscreen”