Play the game on www.katoto.ug (clickable link at the end of article)

It started in 2014, when a budding architect and amateur animator, Richard Musinguzi, uploaded just 6 seconds of a goofy and hilarious character named Katoto on Facebook. The viral clip aroused so much interest that left people marveling at the Mukiga inspired character, who according to Richard is inspired by folklore. From then up to date, a series of short video clips published on Youtube and Facebook have been received with such acclamation. This year alone BBC and Yahoo! News have featured this comic cartoon character. For Yahoo! News, it even went ahead to state that Katoto is Africa’s answer to mickey mouse. Such press has further enthralled and captivated the hearts of men. 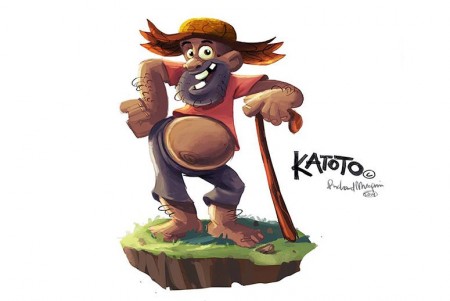 Now, based on the character, a web based game has been developed. The game, #KatotoGame, is dead simple yet thrilling to play; it involves a rat chasing after Katoto on a 2-D canvas. From folklore, Katoto is a cunning yet a despicable coward, it doesn’t come as a surprise that he runs away from a vermin and you (the player) have his entire life in your hands amid adversities. In a Temple-Run kind of storyline, the character has to keep going, circumventing the hurdles on the way, failure of which leads to a cold and sudden death of the character. For Katoto game, on a simplified web interface, press down “J” on the keyboard to jump over hurdles such as boxes, his cow (Ssiina). Similarly, press “R” to roll on the ground. This helps in dodging the claws of preying birds.

Incidentally, the game is at the elusive middleground where the Temple-Run fraternity meets the Flappy Bird sorority for coffee. Just like the former, the character has to run forward (or sideways) beating challenges as well as collecting gems, but, just like Flappy Bird, the character has one shot at it, no extra lives. Please don’t screw it. Don’t cowards have 9 lives anyway? Asking for an analytical friend.

What we didn’t like, geeks will resonate with this

The game is dysfunctional on mobile devices such as smart phones and tablets on top of having an annoying theme song that is fired up immediately when the web app is opened. The explanation for this is; the web app runs on Bootstrap on the frontend and part of the framework’s constructs and design is the disablement of keyboard events on touch devices especially mobiles. Also, the physics engine behind doesn’t follow the natural laws of acceleration (easing in/out). Katoto instantly starts running at top speed which somewhat overwhelms the player. Last but not least, the game lacks a definite goal that would always draw a player back, the addiction to keep on keeping. Besides a crude leaderboard, it lacks incentives (gems) such as life extensions, or even in this case rewarding Katoto with his favorite drink, bushera, which would be pluses.

But these are bottlenecks that can be ironed out by retargeting platform agnostic versions on for example Android, iOS and the Facebook platform itself which is quite popular with games (third party apps) among others. The team is sure working at leveraging the tools available at improving the game experience, pushing beyond the envelopes of social engagement and distribution in this app economy.

For a character that resonates with many people on a local context, the success of the game is highly probable. Sometime in the future be ready to receive an avalanche of Facebook invites by random people for a Katoto challenge and not Candy crush saga or Zynga’s Mafia Wars and Farmville.

We have previously argued that the difference between traditional African games and foreign games is the contextual relevance they hold. Much as the foreign games are widely played all over the continent, there has been a surge in demand for locally produced content and relevant content and #KatotoGame is yet another one, regardless of the bumpy debut.

Play the game on your PC here.