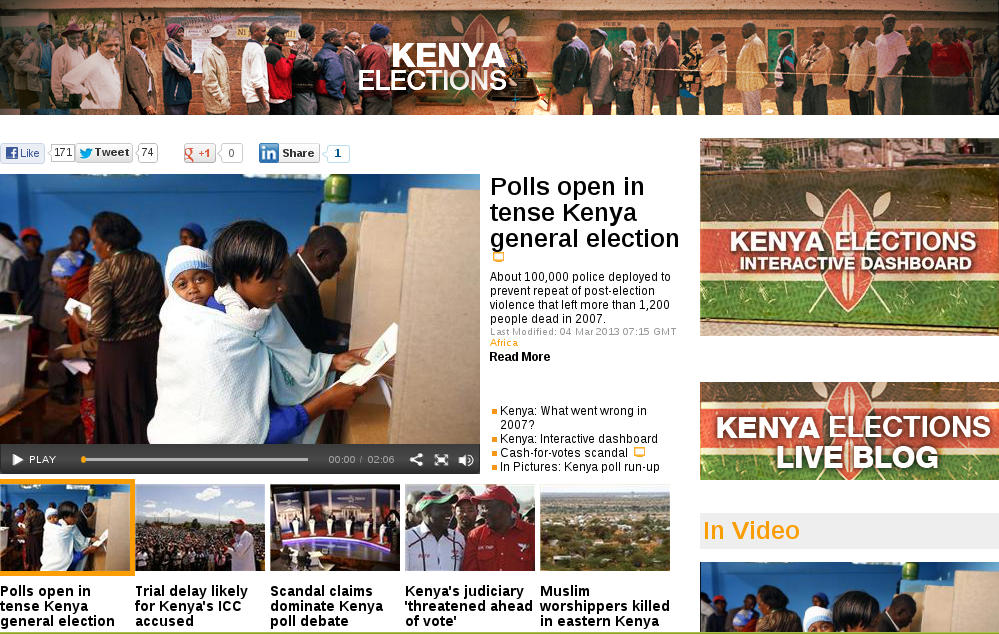 It’s no doubt that technology has played a major key role during the runner up of Kenya’s elections as Daniel Mwesigwa, one of our editors writes.  Today, Match 4th, our brothers and sisters in Kenya will be deciding their destiny using the power of the vote, but as they do, we took some time to scout out places that you can follow the 2013 Kenya elections online whether you live in Kenya or not. 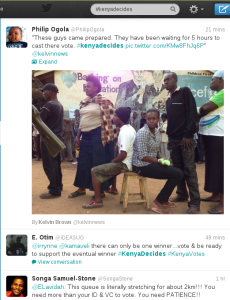 Twitter has become the most important channels in sourcing information from a mass of people. I’ve been following the #KenyaDecides hashtag in real-time and the hashtag is so far churning out about 20 tweets/second at the time of writing with images, videos of long queues of voting lines. Now with the availability of smartphones and 3G wireless networks, information simply spreads like a wild fire.

This YouTube channel managed by Google is aimed at curating all video content related to the Kenya elections. The channel has 1,367 subscribers and features video content from mainstream media houses like NTV Kenya, Citizen TV, among others.

AlJazeera English online will is providing the latest analysis and coverage through a special spotlight page carrying exclusive features and reports from AlJazeera’s James Brownsell in Nairobi. The AlJazeera team is highlighting key electoral issues, such as youth unemployment, which affects 41 per cent of Kenyans; the increased use of technology in the election campaign; and the importance of tribal loyalty during the elections. When i visited the page, i could get as much content about the Kenya elections as i needed.

This online portal by Google provides voters, journalists and campaigns an easy track of news, trends information related to the elections.  With so many constitutional changes including new boundaries, new elective seats, and a new voter registration, it is more important than ever to help keep Kenyans informed about the elective process.  The platform tightly integrated with Google Plus drives election conversation through video and text channels across multiple topics such as corruption, economy, infrastructure, insecurity and public health.

The Daily Nation which is one the biggest mainstream media outlets in Kenya has a special subdomain on its website with rich content on the election process. The site has maps, pie-charts and other data visualization tools to give an in-depth reporting of the election process which is completely different from the way other media channels are doing it.

The TechPost wishes all Kenyans a peaceful election 2013.