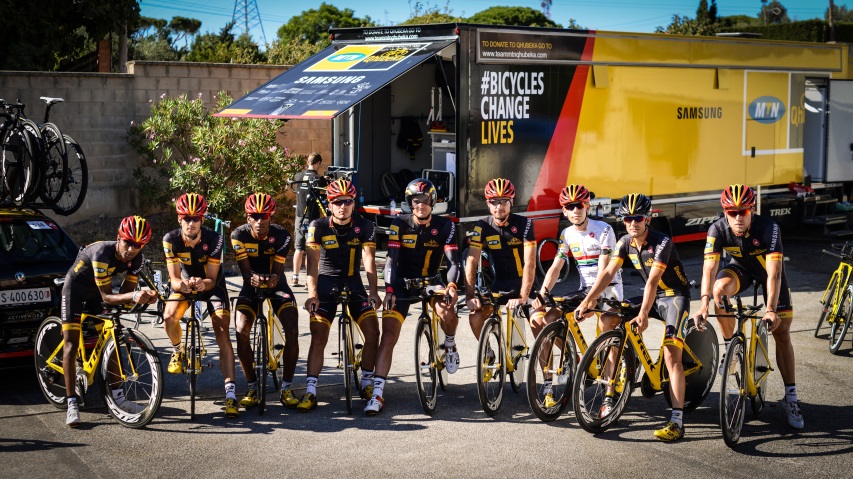 Microsoft is sponsoring Team Dimension Data for Qhubeka  by providing to all ground staff and riders Office 365 to manage logistics more effectively, allowing for greater time and cost efficiency and keeping the team connected across the world.

Team Dimension Data for Qhubeka is the first and only African team to participate in the Tour de France, and is cycling once again to raise funds to provide bicycles to people in disadvantaged communities.  The #BicyclesChangeLives campaign is inviting fans and partners to join the Qhubeka 5000 challenge on 15 and 16 July, during the Tour de France. The event is an international 48-hour interactive fundraising initiative with the aim to get supporters around the world to take part.

The team managing this initiative is spread out across Europe, Asia and Africa. Microsoft Office 365 enables them to collaborate, communicate, schedule, share information and ultimately ensure the smooth running of the Dimension Data team operations.

“Microsoft has been sponsoring the team since 2014 and the partnership has been paying off ever since,” says Rami Azzi, Business Group Lead for applications & services, Microsoft West East and Central Africa. “Of course Mark Cavendish’s victory in the opening stage made it even more exciting to be a part of this amazing team.”

Douglas Ryder, team lead at Qhubeka says, “Microsoft offered us the best logistical solution to connect our team. With Office 365 everything is managed centrally and we also implemented a Cycling Administration System developed on the Microsoft Platform, so we don’t have to worry about missing an important update because we have a central repository.” He adds, “We have also cut our communication costs, not to mention our stress levels, meaning we can focus on race preparation and analysis.”

Team Dimension Data for Qhubeka was founded in 2007, steadily working its way up from a regional team to now being a World Tour team with bases in South Africa and Italy. The team consists of nine riders including; Natnael Berhane, Edvard Bassoon Hagen, Mark Cavendish, Steve Cummings,  Bernhard Eisel, Reinhardt Janse van Rensburg, Daniel Teklehaimanot, Mark Renshaw, and Serge Pauwels. To date, team Dimension Data Qhubeka has raised enough funds for 5 000 bikes that have been given to children in rural communities in Africa to get them to school faster and safer.

Qhubeka was set up in 2005 and is part of a programme run in South Africa by the non-profit, non- governmental organisation, World Bicycle Relief.Since inception Qhubeka has delivered more than 60 000 specially designed, locally assembled bicycles to people across the country. The bicycles increase the distance the children can travel, what they can carry, where they can go and how fast they can get there.

The Tour de France began on 2nd July and ends on 24th July. The race is made up of 3 519 kilometres and includes 21 courses.