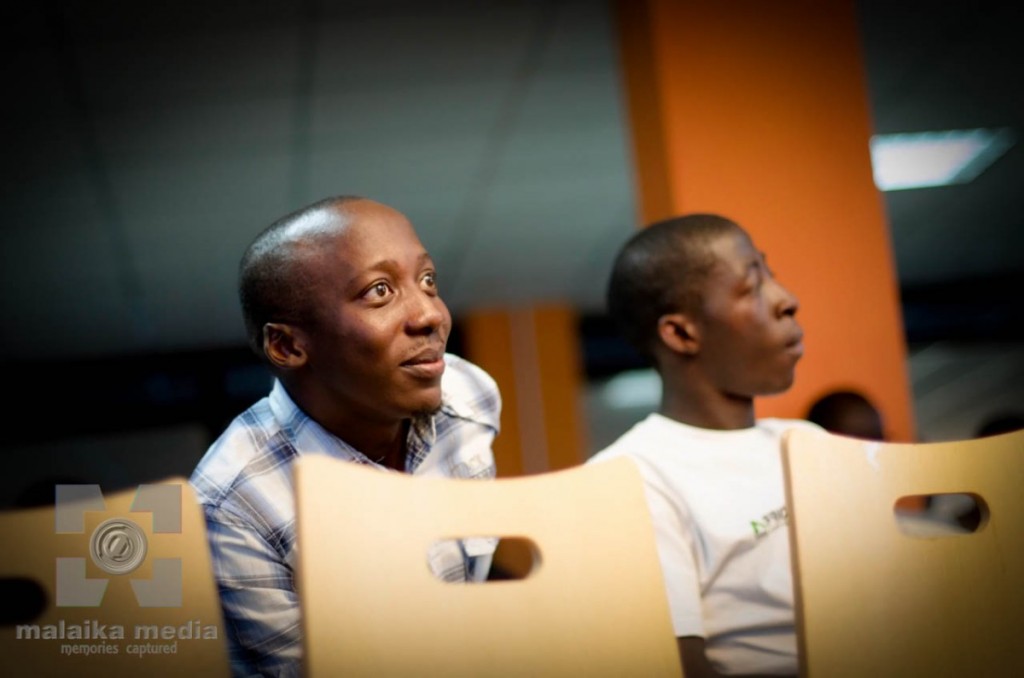 In less than 140 characters, Justine Sacco’s preposterous tweet about her catching AIDS upon landing in Africa got her fired from her PR job. Her reputation was injured too.

This is one of the social media fails that anchored us into 2014.

This year, however, the fails have been so prescient that they looked like works of expert dramactors. We dissected them and unmasked the underlying details you could have missed.

For every tweet and facebook status update made in the name of breaking the internet almost went to the abyss as soon as the send button was clicked. The events that rocked are those that were those least expected and had many astounded.

South African Mail&Guardian does a good job at highlighting most of the hashtags that rocked in Africa on the Twittersphere; #MyDressMyChoice was started in pursuit of stopping irate men from assaulting “indecent” women who took it to the streets in demonstration. This succeeded Uganda’s #Savetheminisirt which had the same premise. #EvilNanny, #BringBackOurGirls among others rocked the internetz.

Even if one spent their entire day on social media they would be sure to miss at least one of the minutiae details that characterize the congested attention demanding sphere. 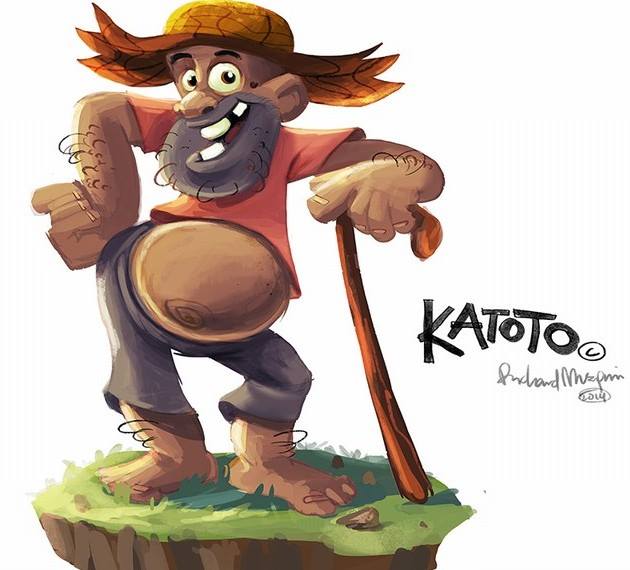 This fictional cartoon character built by Richard Musinguzi finally gained mainstream acclamation. Katoto is a fictional Mukiga, one of Uganda’s tribes, character that is disturbingly funny. Katoto is a fun loving man with a caring family and an unfounded phobia for dogs. The meme-filled videos made punctuated rounds on Whatsapp in equal measure the captioned pictures made rounds on Facebook and Twitter. Ugandans seemed to have finally notched their own Ben’10 prodigy.

It started as a joke orchestrated by Vision Group MD, Robert Kabushenga. President Museveni took his very first selfie. Some skeptics must have alluded it to fixation. He furthered his prospects by joining Twitter. We warned the Twitter narcissists that they were in for a big surprise, the old man in a hat is used to conquering territories. They sighed. Guess who emerged victor, he was even awarded as one of the most influential African presidents on social media this year.

Social media captured this train-wreck between Museveni and Mbabazi blow by blow, frame by frame. Nobody saw this coming; the former renegade Prime Minister, Mbabazi was caught unawares in the solo cabinet reshuffle. Social media users were just on time in caricaturing the befallen Prime Minister, creating and distributing all sorts of memes and gags that were so hilarious. However, Mbabazi didn’t seem moved by any of the trolling and was recollected in most if not all the responses he was jettisoned in.

The prolific hacker is that acne-plunged adolescent who is probably a social misfit and arguably spends the greater part of their day playing video games and phreaking unsuspecting phones. They use their skills to gain access where it is restricted. However for Museveni’s case, the alleged hack was the work of conflicting workers who were busy mud-slinging in the name of impressing their boss. The president’s twitter accounted got pwned like oh, really! Tell-me-another-joke!

In the wake of the hack attack to the president’s Twitter account, it was found out that hacker wasn’t indeed the hacking teen prodigy but rather a medium height man of a lean build by the name of Joseph Owino. It was further revealed by one of the conflicting parties that indeed the hacker in question helped in the verification exercise of the Twitter account in question. As the fiasco fizzled out, Owino was released amid outcry on social media. Fast-forward, more than 2 months later, controversial Kenyan blogger, Robert Alai, was arrested for hurting the person of the president of Kenya by calling him an adolescent and also publishing his mobile phone contact (along with the Vice president’s) on the 140-character social network. 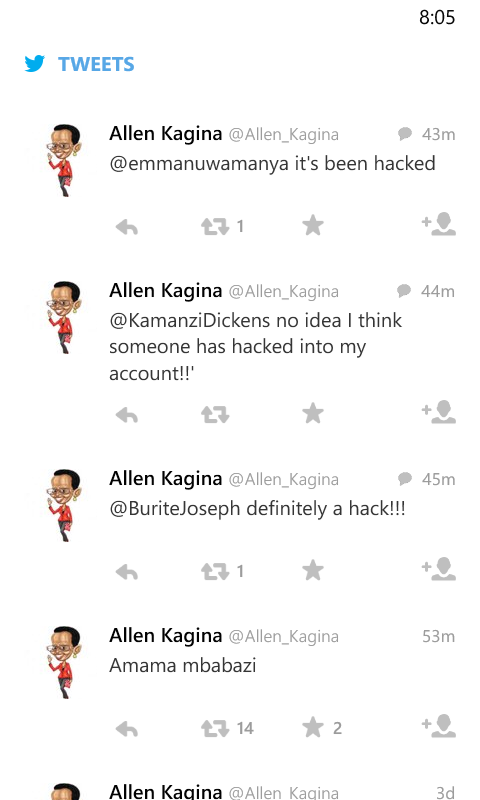 Former Uganda Revenue Authority Commissioner General Allen Kagina’s Twitter was hacked too! What!? Now, this all started with a tweet, “Amama Mbabazi!” Many were wondering what the former CG meant or insinuated given that she is closely affiliated with the ruling family. That kind of vibe the tweet was carrying was unforgivably negative and detrimental. In the following succeeding minutes, she tweeted that her account had been hacked but still hadn’t deleted the nefarious tweet. After a couple of days, the account got protected with auspices of Twitter privacy settings. In a twist of events, the account was made public again and the supposed “hacked tweet” is still waiting for the the delete button like O_0!

Popularized by Mashable, the International Social media day is celebrated every 30th June. Kampala celebrated it a day prior — on the 28th. The subtleness in this is as contravening as much as it is approving. Kampalans will literally jump on any trend but they’re undeniably some of the warmest people. Perhaps they portray the same on social media and that is why this day was such a success.

These chaps didn’t need a hashtag to shut down Uganda’s union square for at least 12 hours. Aligning with popular trend on Twitter, they subtweeted themselves recollecting upon memories of high school. FYI, Ntare school is the only school having two current serving presidents, that is in Uganda and Rwanda. The old students are boisterous about that fact and were quite unapologetic for making Twitter boring for those not interested on that day.

Eddy Kenzo is the ugly duck that everyone suddenly starts calling beautiful after a streak of success. The Ugandan amateur elitists were previously in contestation with the singing sensation for his inability to express himself in English. The sitya loss star broke Youtube with his witful dance video that was endorsed by renown international stars such as Sean Combs popularly known P. Diddy. This has since catapulted his career in dimensions not envisioned before.

#One Ugandan buries KOT, well some segment of it

Nobody messes up with #KOT. Ask CNN, furious Kenyans forced the media colossus into changing a headline that was perceived as false and negative. KOT has brought many countries to their knees such as Nigeria and Uganda especially through the inter-regional wars they provoke their neighbours into. However, all hell broke loose when one courageous Ugandan, @Nuwaha17 summoned them for a twitter fight also known as a tweef. Albeit the most aggressive Kenyan tweeps not being involved, well punctuated jabs were aimed at Kenyans, they must have landed on where it hurt most especially with issues to do with their national security and their untold love for animals (bestiality). Ask Alenyo. Whoever that is!

The 40 days over 40 smiles foundation has proved skeptics wrong about young people, their role in supporting charity work is humbling. Through social media, the foundation is harnessing the plight of passionate into contributing to social causes. Ester Kalenzi and team are the master minds behind annual events like #Hoops4Grace and #CroakAndRhyme that attract mammoth crowds ready to support mobilized on social media.

Popular opinion has it that Ugandans don’t read. On the contrary, the dearth of locally relevant and engaging content could be the cause of the aforementioned ill. Ugandan blogger, Joel Ntwatwa challenged the rather complacent and budding bloggers to a 7 day blogging challenge. This was characterized by contributions about absolutely any topic as long as deemed fit by the bloggers. Personally I didn’t participate but was confounded by the ilk bubbling under the covers. Sure, there is so much potential and hunger to tell our stories is at an all-time peak like never before. Three months after the blogging challenge, a home where to find all Uganda blogs was launched via a web portal www.storipot.com. Finding good stories hasn’t been this easy!

If there is one thing social media has brought out from users is vanity. The number of likes or RTs a person gets have them basking in validation. Most of the users are selfish and want the spotlight to themselves. This is what famous evolution theorist Charles Darwin calls the selfish gene. With related nuance, social media has unravelled the selfie gene. People are now taking selfies in complete nudity or perhaps by the unrelenting help of their lovers. Somehow, by works of “hacking” (Hello Jennifer Lawrence!) or these same lovers, jilted or not, these pictures find their way onto social media. The consequences are usually frustrating but social median netizens carve trends and memes out of these unenviable predicaments.

When systems are malfunctioning, customers are belligerent at best and ignoring them is like siring an apocalypse of sorts. This is what happened when disgruntled MTN customers took it to social media to rebuke the telecom giant for stripping them of their airtime and data besides providing services of sub standard quality. The trolling was so huge that a well architected damage control plan was put forth. For the first time, the CEO flung into action to apologise and address other issues that had been pressing without redress. In soothing the irate customers, MTN refunded the eschewed data/airtime totaling to about UGX 800 million. But many are quick to allude it to a smart move to mellow their sour hearts since they were refunded in excess. Similarly, #GiveNadaHerTaxInvoice had previously sprung out due to the frustrations a one Nada Anderseen had faced in retrieving her tax invoices from MTN.

This was perhaps the most controversial Trending Topic of the year. Efforts by the international community to dissuade President Museveni from signing the Anti-Homosexuality Bill were futile. Hours after the signing of the anti homosexuality bill into law on 24th February, pro gay activists were already lobbying for visa denials of Ugandans who are venting against gay rights both offline and online. The topic was so sensitive that it generated insurmountable commentary both locally and internationally. However, the Act has since been annulled by Uganda’s Constitutional Court.

In hindsight, alot happened! Did we miss out anything? Put it in the comments below.