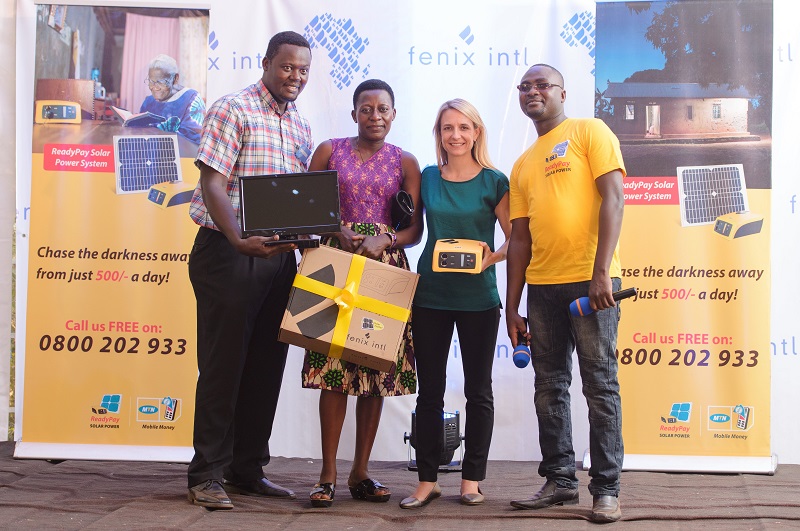 Press Release: Fenix International, a venture-backed technology company providing a next generation energy solution, has reached 100,000 customers in Uganda. This figure stands at double the 50,000 customers Fenix had 12 months ago, and comes just over two years after the company celebrated its 10,000th customer in 2014.

Its flagship solar power system, ReadyPay Power, is generating radical access to energy in
Uganda where over 80% of people lack access to electricity: roughly 600,000 people in
Ugandan households are now benefiting from the 1.2 million watts of solar installed across
the country.

In addition, Fenix estimates that more than 200,000 dangerous and polluting kerosene
lamps have been displaced by their product. With an estimated $23 billion spent per year on
kerosene, the company’s battle against ‘dirty light’ will continue to bring safe, affordable
power to the millions who live off-grid.

Fenix’s business model uses a pay-to-own payment plan. Customers pay just $0.15 per day
for the entry level product, with 36 months to complete payment for the entry level $160
solar home system. This inclusive price point is the most affordable pay-to-own home solar
system in Uganda and is key to the company’s scale in a country where the average salary is
less than $2/day.

“Since we started selling ReadyPay on the
pay-to-own model in 2014, we’ve seen exceptional demand. I’m incredibly proud of our
team, who’ve worked hard to reach last mile customers in this underserved market and
relentlessly provide an exceptional customer experience.”
“Arriving at 100,000 customers showcases our fantastic growth record, but more
importantly it represents more than 600,000 Ugandans who now have power and bright,
safe light in their homes for the very first time. In addition, all of our off-grid customers
build up a credit score, opening up new access to financial services and additional product
upgrades.”

Hitting the 100,000 customer milestone brings the total of solar leases deployed by Fenix to over $20 million. ReadyPay works by unlocking access to the battery as soon as a customer makes a micro instalment which are facilitated by MTN Mobile Money. Fenix’s unique partnership with MTN, Africa’s largest telecom, has seen customers generate over 2.5 million mobile power payments so far.

Building on a robust financing model, a high-quality product, and utter commitment to exceptional customer experience, Fenix is now poised to take ReadyPay and additional product lines to new African markets in the coming year.