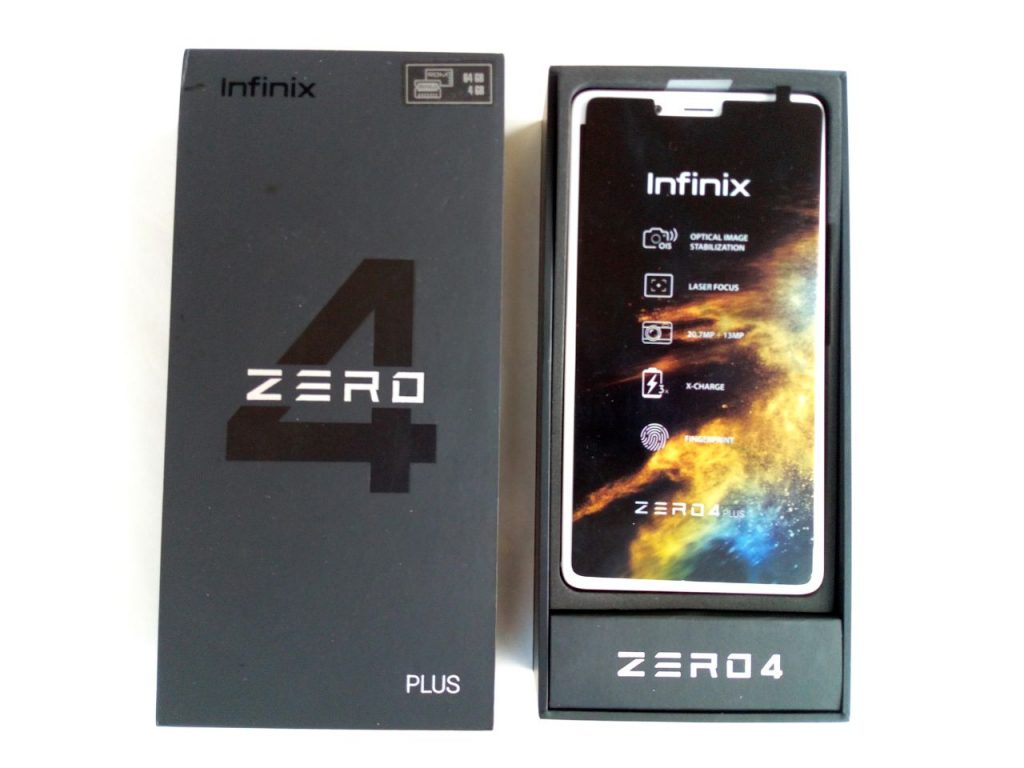 We have spent an entire month with the Infinix Zero 4 Plus, a premium device that offers the beholder a brand of royalty. This is the type of phone that will not go without notice, even from the very first sight.

It comes with a superb camera, fingerprint scanner, an all-metal body, 4G LTE, 4GB RAM, 64GB ROM, a user friendly operating system, and a sleek design to it.

The Zero 4 Plus comes in a sealed rectangular black box with Infinix branding. The box has the Infinix Logo on the upper top and sides, a big number 4 in black with a white ‘zero’ word striking through it and a ‘Plus’ word at the lower top; while the bottom of the box has the specs and IMEI no.  When you open the box, the first thing you see is the Zero 4 Plus. Below the Zero 4 Plus is a pouch containing a black folder with a SIM card ejector, the screen protector, a square paper with a list of what’s in the box and a user guide. 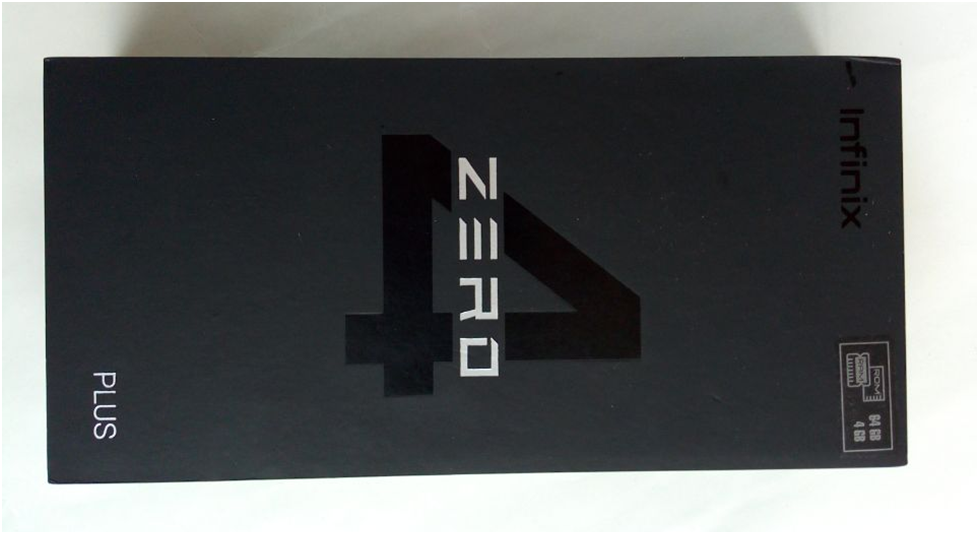 Within the box is the Charger head, a transparent phone case, earphones and micro USB charger. In the box is: 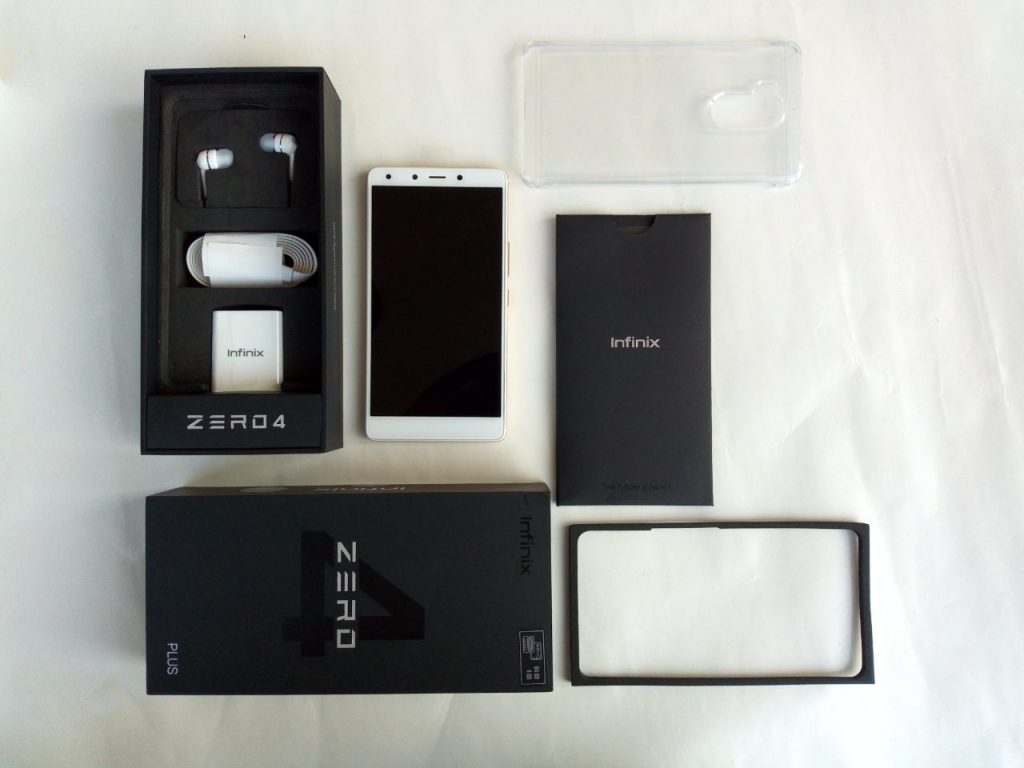 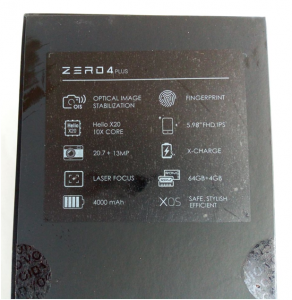 Eight things about the Infinix Zero 4 Plus

For the record, I had not come across a device that has everything on my wish list. The Infinix Zero 4 Plus does beat the odds, and can easily corrupt you into thinking less of the other brands because of its build and classification.

I have summarized it into Eight key things about it that caught my attention.

The featured 5.98 Full HD Display is a large surface – real large, that even the screen protector that came along with the package does not fit it all. It is that size that fits well into your palm, giving you a feel of tight grip of what you own. 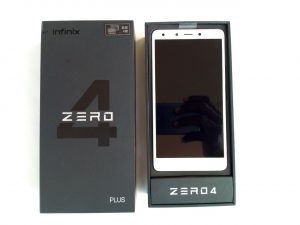 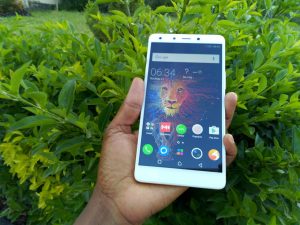 The large screen has been very productive when taking pictures, especially selfies, as you can keep your focus to the center; and gives you a clear view of what you are photographing. Even when browsing the internet, it feels much more interactive like when on a desktop, and accords you easier swiping and fluid finger motion. The surface on top is real hard, with a 2.5 D Corning Gorilla Glass 4 coating which protects the screen from damage on fall, at least for the one incident when it fell from my palm a distance of about 2 feet off the ground.

The Zero 4 Plus is designed with a full Aluminum smooth-layered body implying a non-removable back cover. When facing you, the right hand side has the volume buttons tagged into one, and the power button just next to them. 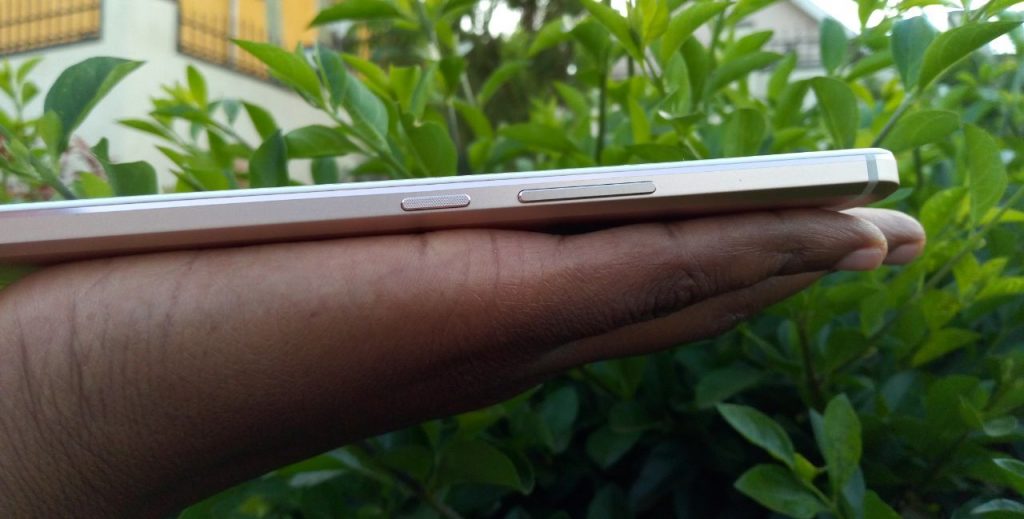 The left side has the SIM card slot, allowing for two cards though the second SIM slot is a hybrid that either takes a SIM card or an SD card. The top has a 3.5 mm earphone jack, and the bottom has two loudspeaker grills with a mini-USB port in between them. It is however notable that only one of the grills that worked, implying that there is just a single speaker and probably a microphone.

The back side has the 20.7 MP camera as a protruding feature. On its side is the dual LED flash and Laser AF sensor, and below is the fingerprint sensor that has a lot of functionality for the experience had with it. 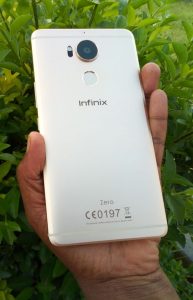 Infinix is becoming big on camera, and the Zero 4 Plus does not disappoint. This camera shoots better photos than any other Infinix mobile on the market, and probably many devices that fall in its range. It has a 20.7 MP rear camera and a 13 MP front camera with improved detail to the environment when taking selfies.

These are some of the photos we took with the camera. 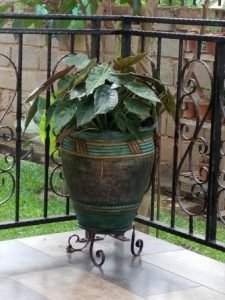 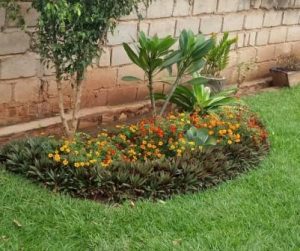 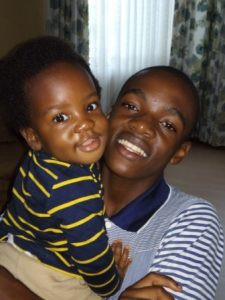 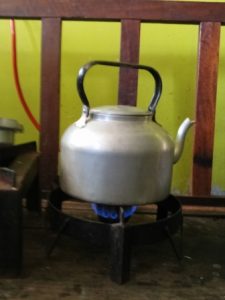 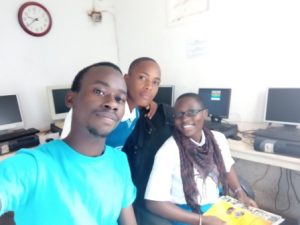 We as well captured a few videos with the camera and it was never a disappointment. Even with the focus object as far as 100 feet away, it can still be very vivid and visible without a blur.

This specific video was captured at a football match, and an entire first half of the game (45 minutes) was captured clearly. 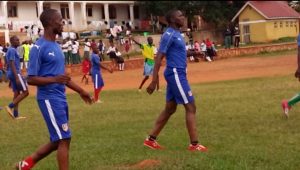 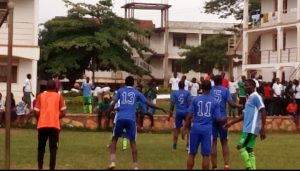 The Multimedia and Apps

Running on Android 6.0 Marshmallow, with Infinix’s XOS Chameleon for a finer user experience, the Zero 4 Plus comes with a rich collection of in-built applications, , including all the applications categorized in five blocks. These are:

Google, which entails the basic apps that run on Google platforms; XOS Family, which has the various apps customized for Infinix mobile use; Social, that includes applications that you would use to link up with friends and family; Media, that has the apps to offer you entertainment; and Tools which is comprised of the utility applications such as the calendar and calculator.

It allows for the installation of third party applications, with a user having to adjust the settings to allow for such. There is also a Freezer app that puts a halt to whichever apps that may not be in use, lest saving you RAM.

The Zero 4 Plus has an inclusion of both live and internal Wallpapers that add beauty to and brighten the Home screen. There is an option of downloading many more though for the times i tried to, I did not succeed.

The Infinix Zero 4 Plus boasts of a huge 64 GB of ROM, quite enough to cover up for most of your storage needs. And with an amazing 4 GB of RAM, the processing is just satisfying. This is very evident with the fingerprint scanner, which had no flaw in letting me unlock the device at all times.

At initial stage, around 11 GB of the 64 is already taken up by the Operating system files and the pre-installed applications. This leaves you with around 52 GB of memory, which is not any bad either.

The battery performance is absolutely gratifying. The Zero 4 Plus comes with a 4000 mAh battery; which supports Infinix quick charge technology, the X-Charge.

I experimented 100% use of the battery (from full charge to one percentage) and I was amazed by the device. The Infinix Zero 4 Plus can on average take up to fifteen and a half hours with an active battery, putting in consideration internet use, making and receiving calls, and text messaging. This implies that turning off data usage and reducing on phone activity can increase on the durability. 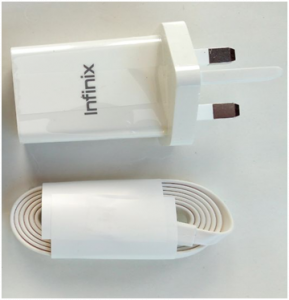 I experienced 4G LTE connectivity with up to 150 Mbps download, working well with the popular networks; MTN Uganda, Airtel, and Africell. I experienced no network glitches with any of the three, though I noticed the inability to use the internet whenever I was receiving a call. This was however not a big issue, because I did not expect to use it during the process.

One thing about the Infinix Zero 4 Plus is the royalty that comes with it. For the period I had it in custody, whoever saw me with it wanted to have a feel of it. Wherever I went, it captured on lookers attention and increased many’s love for the brand.

The Premium status, though, comes with a hefty charge – something that most of the admirers found is a downplay. The Zero 4 Plus costs UGX 1,059,000 in the various offline shops where you can buy Infinix phones and Accessories; and a subsidized UGX 929,000 on Kilimall online shop.

For the month I spent with the Infinix Zero 4 Plus,  I grew in so much love with it. It is a sleek phone, one worth spending your hard earned savings on. The apparent look is just enough to convince you of its price tag, and an experience with it stamps it even further.

I tried as much as I could to make comparisons with a variety of devices that would fall in similar calibre with the Infinix brand, but none beats the Zero 4 Plus.

If you need a phablet that will comfort you from any competitive worries, the Infinix Zero 4 Plus is worth the exchange with your savings.

I am now hoping to purchase one for my own self.

Tell us any experience you’ve had with the Individual Zero 4 Plus, if at all you had the opportunity to experience it.