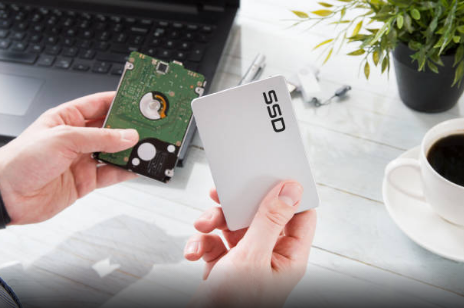 Day in, day out; the data keeps piling. The storage space that was more than enough for your digital keeps, a few years back, is now too little to accommodate it all. It is then that we are grateful for the evolution of external memory devices; that have at least offered a suitable alternative.

Storage is a key element of computing, without which processing would be in vain. But a user has to make a choice between using solid-state drives (SSD) or hard disk drive (HDD).

A hard disk drive is a data storage device, composed of a metal platter with magnetic coating, and it uses this coating to store and retrieve digital information. A solid-state drive, on the other hand, uses interconnected flash memories to store data persistently even without power.

How do they differ?

Whereas the SSDs have become of interest with computing advancement, HDDs are still a darling to many manufacturers and consumers. But the difference between the two is primarily a basis of their unique features and how they contribute to functionality. Let’s see how they differ the various features.

The hard disk drive is prone to fragmentation of data, unlike the solid-state drive, and this slows down performance rates. An SSD is 50 times faster than a typical HDD, which implies that a computer with the SSD boots faster, transfers files more quickly, and performs better during computing.

In the short run, Hard Disk Drives are cheaper in terms of dollar per gigabit; where an SSD with a storage capacity similar with an HDD can be twice as expensive. But in the long run of use, with the HDD wearing out faster, the solid state drives are a better option. A buy for use, however, would refer to a cheaper short term expense.

With the standard storage capacity of Hard Disk Drives at 500 GB, compared to the 128 GB of solid-state drives, the variety to choose from tends towards HDDs. Any attempts to acquire as much from an SSD would require a deeper throw into the wallet, which becomes an inconvenience of sort.

A Hard Disk Drive consumes more power because it entirely relies on the rotation of the magnet-coated metal platter for data storage. A Solid-State Drive, on the other hand, does not require any mechanical work to become operational; implying less power consumption.

Once an HDD drops or shudders, it is less likely to live on. This is because the internal movable parts can easily breakdown and result in complete data loss. This is an advantage to the SSDs, which are more durable and resilient to such trauma.

All over the place; HDDs are the household item. They are readily available on the market, and even most computers on sale can only accommodate them. But the adoption of compact laptops and tablet computers means that SSDs are becoming also more available, and could have the same availability in the immediate future.

The movable parts of an HDD do vibrate whenever a computer is booting or a user is storing large files. This is brought about by the random spinning and movement which produce mechanical noise. SSDs are noiseless, since they have no movable parts.

Since an SSD is more compact than an HDD, it is a more suitable storage component for portable consumer electronic devices such as ultrabooks and tablets. This makes it of more favour than the HDD.

The weights of Solid-State Drives pull over those of the Hard Disk Drives, but the battle still rotates around cost and performance. There henceforth, your choice is the key.

Below is an Infographic from TheGreatSetup.com that summaries the differences between SSDs and traditional HDDs.