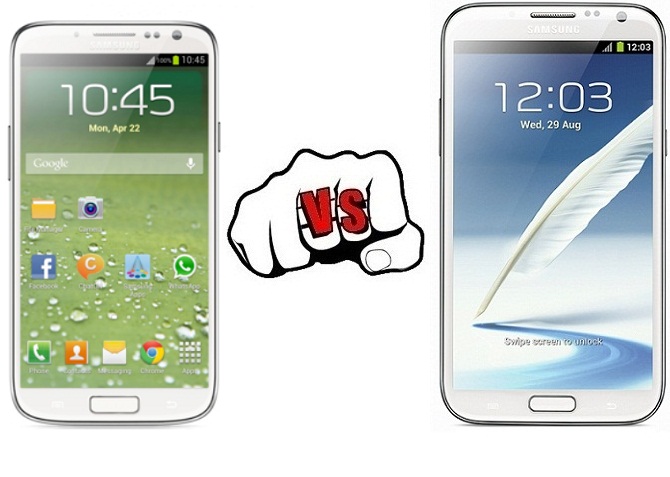 The Samsung Galaxy S4 features a 4.99-inch full HD Super AMOLED 1,920 x 1080 display with a pixel density of 441ppi while the Samsung Galaxy Note 2 comes with an S-AMOLED capacitive touch screen display of 5.5 inches of 720 x 1280 resolutions with a pixel density of 267 ppi. The Galaxy S4 uses Super AMOLED display with a PenTile pixel arrangement.

The phone has got Backside-illuminated (BSI) sensor for better low-light sensitivity. It can be used for video calling and has even got Dual Camera mode. The front camera of the phone controls the phone with Smart Pause. When you look away from the screen the video will get paused and when you will look back, the video will automatically turn on.

The Galaxy S4 has got Exynos octa-core processors running at 1.6GHz. It uses ARM’s big. LITTLE architecture and is therefore, strictly not an eight-core processor phone. The eight cores are divided in two: four high-power, complex cores for doing the heavy lifting and four smaller, power-efficient cores for doing more mundane tasks. Its architecture is designed so that it can switch between the different types of core seamlessly while the Galaxy Note 2 is powered by Exynos 4412 Quad, MALI 400, 1.6 GHz Cortex A9 Quad Core processor.

The Galaxy S4 will have the Android 4.2.2 Jelly Bean OS while the Galaxy Note 2 operates on Android Jelly Bean v.4.1.1.

However, like the Galaxy Note 2 even the Galaxy S4 has got 2 GB RAM and the storage capacity of 16GB, 32GB and 64GB which can be expanded further through microSD card.

Editor’s Note: This guest article has been composed by Christy Root who works for PrePayMania and, who writes Guest Articles, Press Releases for Mobile Phones. She loves to update herself with different mobile technologies.