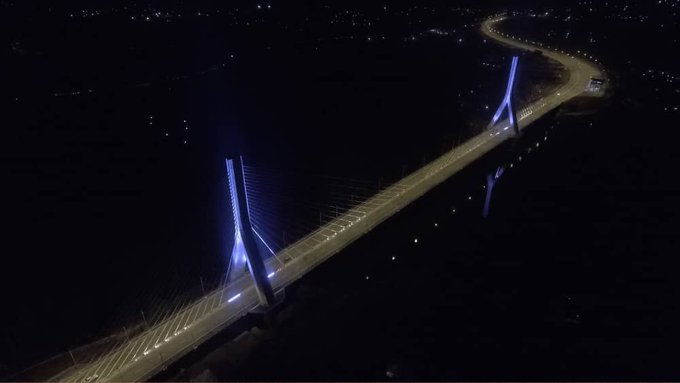 It was constructed at a cost of about sh41.1b, and is expected to have a life span of 120 years. The new bridge has a four-lane dual highway with pedestrian sidewalks.Its funding was from both the Uganda government(20%) and the Japanese government through the Japanese International Cooperation Agency(80%). The money from the Japanese government was in the form of a soft loan of US$100 million at an annual interest rate of 0.01 percent, repayable in ten years but extendable to forty years.

The Jinja Nile Bridge is 525m long and is the second of its kind in East Africa after Tanzania’s 680m-long Kigamboni Bridge which was commissioned about two weeks ago.

Cable-stayed bridges are one of the most elegant designs for a bridge. They have a modern look and feel, and use less steel than their counterparts. The new Jinja Nile Bridge was locally designed by a fellow Ugandan David Luyimbazi with inspiration from the Boston suspension bridge.

What is a cable-stayed bridge, and how does it work?

Along the bridge are many towers Aldo known as pylons. Each tower has cables that connect it to the bridge. These cables exert a tension that keeps the bridge in place. In the cable-stayed bridge, the cables deliver all of the weight of the bridge to the towers, and therefore, the bridge doesn’t need to be anchored to the shores.

See Also: What is a SIM card and how does it work

The build and design

The new Jinja Nile Bridge is built in a fan design where the cables all connect to or pass over the top of the towers. The fan design is structurally superior with a minimum moment applied to the towers. In the modified fan arrangement, the cables terminate near to the top of the tower but are spaced from each other sufficiently to allow better termination, improved environmental protection, and good access to individual cables for maintenance.

The Bridge has sensors to sense whether the bridge deck is moving or not and also spot vehicles are overloaded and will be apprehended at the other side of the bridge.

There are 202 Light-Emitting Diodes (LED) bulbs at the base of the cables, but with the meridian of the deck, that light up the 72 stay cables.

The bridge has a dual carriageway 7.0m wide with a pedestrian walk way of 2.25m wide on both ends.

History of the Cable-stayed Bridge

The cable-stayed bridge was written about in the 16th Century, but it wasn’t until much later that they were first built. Engineers did various experimentation with cable-stayed elements on both the Albert Bridge in London and the Brooklyn Bridge in New York City.

Cable-stayed bridge is a bridge similar to suspended bridge in that it has towers and a deck that is held by cables, but its cables hold the deck by connecting it directly to the towers instead via suspender cables.
According to the President, the Jinja Nile Bridge will be used by pedestrians and motor vehicles. Cyclists will use the Nalubale bridge.