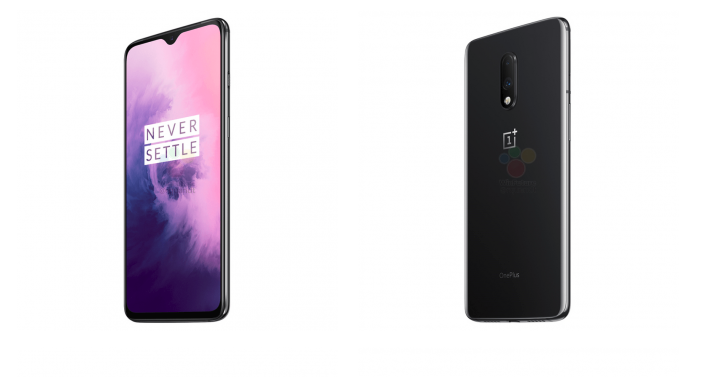 In 2019, everything leaks. And one of the most hyped smartphones of 2019, the OnePlus 7 is no exception. OnePlus is gearing up to unveil their 2019 flagship on May 14th, and the company has even dropped a few tidbits like the faster storage and bucket-based water-resistance.

As we have come to expect all the essential info of the device have been leaked. There will be a OnePlus 7 Pro in several colors, and there’s also the non-Pro version. Previously, we only got a third-party render of this phone, but now the official press renders are out.

Images of the yet to be released phone hint towards a design that is awfully similar to what we’ve seen with the OnePlus 6T. It spots the same waterdrop notch, with a wider earpiece up-top. OnePlus sticks to their tried and proven 1080p display, on this one measuring at 6.41 inches. Around back, the two cameras and the flash are together inside the camera hump. On the 6T, the flash is just below that.

According to the leaked info, the OnePlus 7 will have many of the same specs as the 7 Pro. There will be a Snapdragon 855, 6-8GB of RAM, and 128-256GB of storage. The main camera is allegedly a 48MP Sony sensor, but the secondary is just a 5MP depth sensor. The OnePlus 7 Pro will allegedly have three cameras on the back. We’ll get the full story next week.