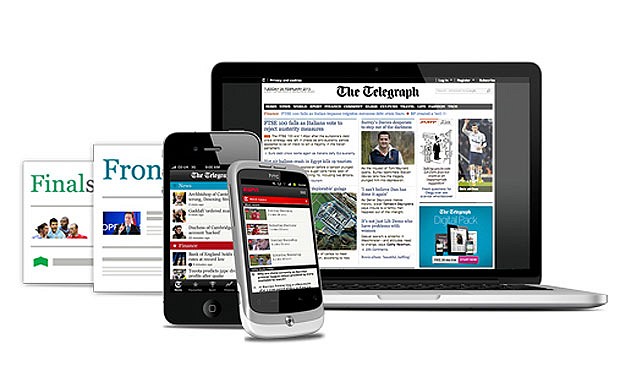 Cape Town startup, Afrozaar have successfully carved out a niche in the digital media and content redistribution space and have cemented their status as a market leader with their platform Baobab Suite. With the likes of local companies Media24, Old Mutual, Deloitte SA, and Liberty under their belt and their newest heavyweight global client is the UK based publisher, the Telegraph Media Group.

The Telegraph Media Group (TMG) boasts a readership of over 8 283 000 readers a month with it’s popular titles The Telegraph, Sunday Telegraph and The Daily Telegraph. TMG is arguably one of the most successful news publishers in the Western World. They are known for their constant drive for innovation in the newsroom and high quality of journalism and content creation.

Dirk le Roux (CEO of Afrozaar). Publishing companies and news leaders like The Telegraph are clearly seeing the value in going digital with their content. This requires innovative mobile architecture and investment and requires more than a band-aid approach of a simple mobile app overlay. This is where Afrozaar have revolutionized the publishing industry with their end-to-end content redistribution platform, Baobab Suite, and their complementing mobile apps.

“We put the power back into the publishers hands as to where their content goes, who can see it and what it should look like. This is all controlled at runtime across native mobile apps – which eliminates the major obstacles when dealing in a native mobile app landscape”,

says Rich Cheary. The Baobab Suite (Leading technology from Afrozaar) effectively aggregates, packages and distributes content securely for the Publishing Industry. Through the Telegraph using Baobab Suite it can now continually deliver rich and relevant content anytime, anywhere on any device. “We built the Baobab Suite platform with the Telegraph’s publishing process in mind. From the start we knew the digital objectives needed to be achieved. It has been a journey we have enjoyed walking with one of the world’s leading content distributors, and have learned a lot and believe all publishers could benefit by achieving similar digital publishing objectives”, says Rich Cheary (Founder of Afrozaar).

The Baobab Solution does not replace existing Content Management Systems, subscription or payment systems, instead it aims to complement them. By being strong advocates of a “no-lock” mobile app partnership, the Baobab Suite team encourage publishers to retain their existing development partners and use Baobab Suite’s native app SDKs, so that these partners or in-house teams can build consistently faster and more maintainable mobile apps.

The Baobab Suite technology is fully operational, it is being used by one of the best content generators in the world. This is big win for a local, self funded and independent Cape Town startup that is now hiring close to 20 employees. Their goal moving forward is to help publishing companies package and redistribute their content straight from multiple sources in a pure and reusable digitized way and also ensure technical sanity when it comes to dealing with the challenges faced when distributing content across potentially millions of native apps and social content aggregators such as flipboard, Bing, HTC BlinkFeed and Facebook.

Editor’s Note: This press release was submitted to us by Lianne du Toit from Silicon Cape, an innovation hub in South Africa. Lianne is Founder at Talent Fusion and Business Developer at U-Start.  The TechPost encourages guest posts, press releases and news about Startups and innovators making impact on the African continent.

One thought on “Cape Town Startup, Afrozaar behind the Telegraph news”