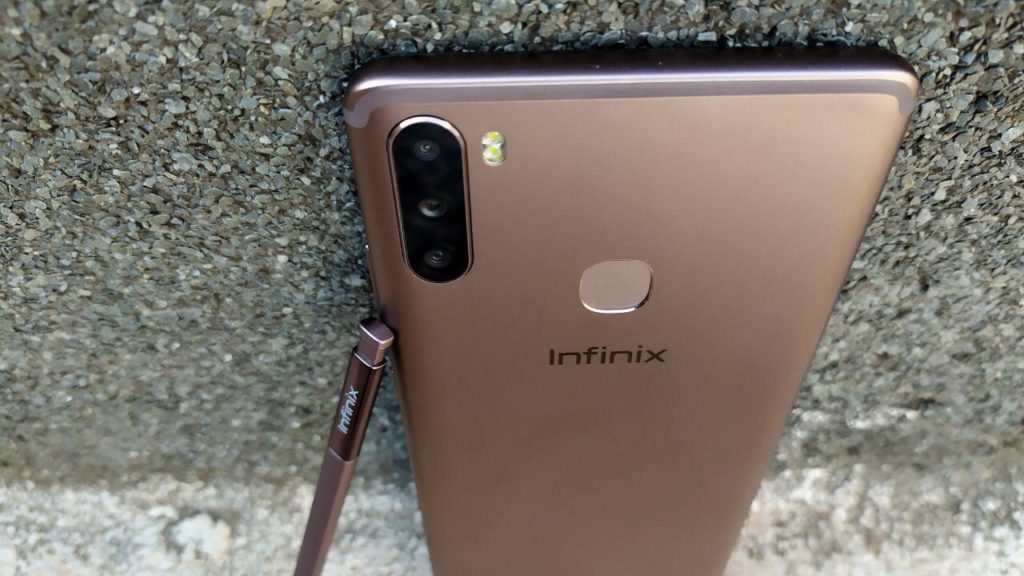 The Infinix Note 6 has a gorgeous AMOLED screen, AI-powered X-pen with refined and an octa-core processor, a metal frame. It also has long battery life, makes clear calls, and takes good pictures.

The Infinix Note 6 has bloatware, is large for small hands, and has chunky bezels.

The Infinix Note 6 makes the most compelling case yet for a supersize big battery stylus phone, affordable and very potent.

The new Infinix Note 6 is a tour de force in juggernaut handset design. Not only is it big and bold, but this imposing device also has an incredibly sharp 6.0-inch AMOLED display, and battery life to go the distance. More importantly, the Note 6 features a sleeker design than its predecessor, the Note 5, an AI-powered X-Pen, plus the same superb camera you’ll find on the TECNO Phantom 9.

This generation of the Note is a significant upgrade from previous devices. It is the first Note device (and Infinix phone) with an AMOLED screen. Frankly, it has the power to school some more expensive flagship devices on the market.

Now available in all Infinix shops countrywide, the Note 6 costs UGX 749,000. However, you can sweep through some online sellers for like Jumia for better deals on the Infinix Note 6.

The Infinix Note 6 represents an upgrade over the previous Note devices. In a nutshell, the Note 6 has a 6.01-inch full HD AMOLED screen; revamped X-Pen features; a thinner, lighter metallic chassis; better processor than the Note 5.

The Infinix Note 6 ticks most of the right boxes in design including a slimmer profile, and good aesthetics. At only 7.7mm, the Note 6 is thinner is much thinner than its predecessor. However, this caused a shrink in battery capacity from 4,500mAh on the Note 5 to 4,000mAh.

Along with the reduction in thickness came weight loss. Infinix lightened the device and if you are migrating from the Note 5, you will notice this. It is safe to say that this is the sleekest Note yet.

Design-wise, the Note 6 deviates from the smooth, glassy looking plastic, of recent Infinix phones and the Note before it. The Infinix Note 6 has a rectangular metal chassis with a subtle curve on the edges that makes it even feel thinner in the hands.

These design modifications aren’t just for show, either. The Note’s metallic rear surface handily resists fingerprints and protects against minor scratches. Now I’m sure many people out there will find the resurrection of the metallic chassis a tad nicer.

The front face of the device still features chunky top and bottom bezels. They are not as prominent as those on the iPhone 8 but are a thing from the near past given the recent stream of bezel-less phones on the market.

In the top bezel contains an earpiece with a 16-megapixel camera lens and LED flash sitting on either side. At the back, there is a vertically stacked triple rear camera setup with a dual-LED flash beside the top lens.

A fingerprint scanner that we found rather high to reach comfortably sits in the top middle area of the phone. Antenna lines on the top and bottom areas of the back ending where the chassis meets the front panel.

The SIM and microSD card tray sits inside the left edge while the volume rocker keys and power button occupy the right. Interestingly, the power button has been given a bit of texture to differentiate it from the volume buttons.

The X Pen is tucked away in the bottom edge. Also living on the Note 6’s bottom edge is the 3.5mm audio jack, a microphone, a micro USB port, and a down-firing loudspeaker.

Trust me when I say that the Note 6’s screen is simply gorgeous at this price point. At 6.01 inches across, the AMOLED display has full HD resolution (1,080×2160 pixels) which translates into an amazingly sharp 402ppi. This is the same resolution that the Note 5 had it has deeper blacks.

It certainly outdoes the viewing experience on the much more expensive TECNO Camon 11 and 11 Pro. However, equally-priced devices like the Samsung Galaxy M20 (32GB) and Redmi Note 7 (64GB have sharper screens with more viewing area.

Colours are well saturated with deep blacks and very wide viewing angles. Watching all sorts of visual content on the Infinix Note 6 is extremely captivating. Whether you are watching HD content from Netflix or playing an action game, characters practically leap off of the screen and into your lap.

It’s all about the X Pen

It’s unlikely that even the most avid Infinix Note devotees use their X Pens often, at least those who don’t a lot of drawing on their phone. Infinix hopes the Note 6 will convert more users into being X Pen faithful.

The company said it revamped the X Pen experience on the Note 6 with AI powers. While companies like Samsung have already mastered the art of the Stylus, I feel like the X-Pen has made large strides towards becoming a worthy contender. I’ve actually been tempted to use it. Here’s how it works.

Removing the X-Pen from its sheath launches the X-Pen menu.

When you pull the S Pen out of its sheath, a little fan-shaped graphic called the Air Command appears. If you have used the S Pen on the Galaxy Note series, there is nothing new the X-Pen will present. Apart from the alert that pops up to remind you to return the X-Pen to its sheath, we were not able to verify the AI-powers that the company claims.

You can take screenshots, take notes and write on screenshots easily using the X-Pen. Also, you can activate it from any screen or app by holding the pen close to the display and pressing the X Pen’s button. A lack of Air commands may affect uptake by advanced users but the ordinary people will find the X-Pen a compelling tool than ever before.

Everything on the X-Pen menu is boiled down into five main options: Create Note, Write Memo, View Files, Take screenshot and Painting. There is a 6th option to add app shortcuts to enable you to launch an app by way of the X-Pen.

You can create handwritten notes, jot down quick drawings and operate the phone with the X-Pen. Resting your palm on the screen of the phone doesn’t affect X-Pen usability. The device is can transcribe the handwritten text into copiable text. However, this is a hit and miss for terrible handwritings.

Infinix has equipped the Note 6 with a 16-MP front camera with rather over-processed outcomes. The selfie camera has low light capabilities and takes bright images. However, the images look less natural compared to the image quality of the Redmi Note 7. In AI mode, the camera app adds various color filters over selfie images to give a saturated image.

The camera can also take sharp, high-detail close-ups with strong colours. Portraits look better and the wide-angle lens comes in handy if you need to capture more in one shot. Pictures taken in low lighting are not as awful even without a flashlight. However, there is plenty of noise especially when zoomed in.

There is no image stabilizer to balance out small camera shakes. This means that you need steady hands when taking shots with the Infinix Note 6.

The Infinix Note 6’s performance is sufficient for graphically less-demanding applications. More-demanding games should be toned down to low settings since they have long loading times. This will give you smooth gaming experience. The games device displayed smoothly. The touchscreen controls games very well and responds to inputs without delay. The position sensor also responds quickly with only slight delays.

Verdict – affordable smartphone with a stylus

The Infinix Note 6 presents itself as a robust stylus smartphone for everyday use. It has good performance and can handle a little above basic WhatsApp use and Internet browsing. The X-Pen gives this device a high-class feature for this price range.

However, potential buyers should be aware of the ad infested XOS skin which wasn’t the case with the Note 5. The cameras are good enough for occasional snapshots but not much more when compared to competing devices.

If you love the X-Pen but you prefer Android One, I recommend the Note 5 Stylus. It is still a great device and offers a cleaner interface. On the positive note, the Note 6 has a great battery and a good screen. It also has an octa-core processor although users should not have too high expectations as you may sometimes notice lags when you draw out the X-Pen and some app screens.

Should I really consider buying an Infinix Note 6?

There are principally two types of Android users:

The Infinix Note 6 is not nearly as fast nor as powerful as the multi-million Note 9, but for a phone that you can pick up for an affordable UGX 749,000, the Note 6 is worth its price. If you can afford the big-budget, I recommend the Galaxy Note 9.

However, if you’re tired of spending insane amounts of money on your phone and really want a phone with a stylus, your UGX 749,000 will be well spent on the Infinix Note 6. And with all that extra money in your pocket, you can start saving for that new customized Kiira EVS.