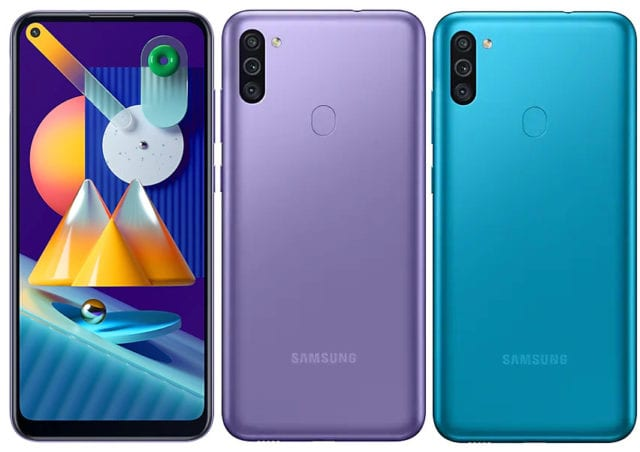 A new entrant — Samsung Galaxy M11— has been added to Samsung’s M series. This is an upgrade —a major one, actually— to the predecessor, M10. A number of new features were added and we’re here to unpack.

This post covers the specifications, features, and price of the Galaxy M11 smartphone.

The Samsung Galaxy M11 features a 6.4 inches display, and a screen resolution of 720 x 1560 pixels. The large display, like many Samsung phones, makes it great for watching/streaming movies, playing games e.t.c.

The rear of the device features a fingerprint sensor located at the upper part. This enables easy access by the index finger. The phone cameras are also safely and vertically arranged at the top-left corner of the M11.

M11 features three rear cameras. The resolutions of these cameras are pegged at 13MP, 5MP, and 2MP respectively. The 13MP camera is the main shooter while the 5MP camera has an ultrawide focus.

On the front, there’s an 8MP camera that guarantees you perfect selfie photos.

Samsung Galaxy M11 features an Octa-core Qualcomm SDM450 Snapdragon 450 processor with a speed of 1.8 GHz. The device runs on the latest version of the Android operating system, i.e. Android 10.

A whooping 5000 mAh battery means users of the M11 device can enjoy long hours of usage. This device looks to be appropriate for high-end smartphone users.

Other features of the Galaxy M11 include 4G LTE support and a fingerprint sensor located on the rear.

The Galaxy M11 smartphone currently sells for $145 or N54,000 Nigerian Naira. Taking a glance at the features the device comes with, it sure does look like a bargain for its price.