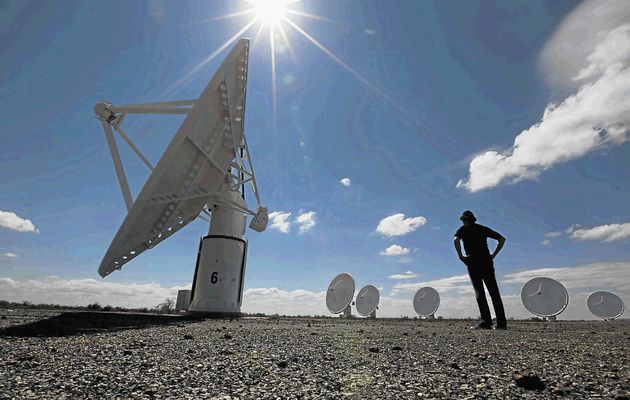 “Do you ever gaze at the stars and wonder how it all began and whether there is life out there? If so, the answers may come from unexpected quarters,” says Redi at the start of the show, which was broadcasted from Johannesburg, South Africa. “Money is being pumped into space exploration in countries like China and India. And here in Africa, South Africa recently won a bid to co-host the world’s largest radio telescope, a project that could see Africa emerge as a leading global science frontier. Eager to find answers to some of astronomy’s long-standing mysteries, top scientists and engineers from all over the world are flocking to the continent. So what discoveries do they have in store for us? And how will the region benefit as a whole?”

Oleg explained that SKA is going to be “more sensitive by a huge margin over anything we have right now.”

In terms of South Africa’s “new positioning” as a space hub, he said the country “already has emerged and people just want to come here and join the excitement.”

Cynthia’s previous post was in the South Pole. “A lot of the telescopes are located in very remote locations, because that’s where we have access to the cleanest skies. The Karoo is another excellent example and that’s where the SKA will be located.”

She and Oleg said the SKA team is diverse, but includes many South Africans. “We do have a very vibrant community of South Africans working on the project so it’s not just a plot of land by any means,” says Cynthia. “The SKA offices in Cape Town are brimming with people and young scientists who will eventually transform the country.”

Oleg said SKA’s phase one budget is 600m Euros, which comes from international contributors in addition to South Africa.

Fumani said “the development question we should be asking is what does it mean for us, the people to whom the land belongs?”

She challenged the idea that, “To the extent that there’s money flowing into the country, that means there’s development. Development is about justice, about equality, about spreading benefits, and those are the things our state is failing at.”

The group discussed the benefits of astronomy.

“Pure science is really blue skies research and hard to advertise as having a specific application but pure science also has the benefit of having wonderful technological spin-offs,” said Cynthia.

She pointed to both the internet and GPS as being spin-offs from pure science, while Oleg said it was already clear that SKA will lead to lower-power computing as a direct spin-off.

“Astronomy first of all teaches us to be humble,” said Oleg. “We really are just a tiny dot on a small rock orbiting a ball of gas, so it teaches us that our role in the universe is not special at all. But at the same time, it teaches how precious we are, that we are actually capable of sitting on this tiny rock and discussing these kinds of questions.”

Oleg also believes astronomy is important because if you “take the long view: humanity has to go into space. We only have this one precious planet and if we don’t someday expand, we’ll be stuck.”

The group also discussed SKA’s public outreach programme, the role of universities in SKA, India sending rockets to Mars, and whether or not aliens exist.