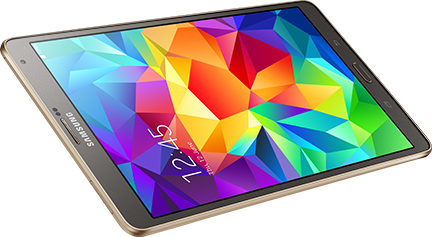 Yesterday in a New York event, Samsung unveiled its latest device the Galaxy Tab S touted to be Samsung’s thinnest and lightest device to date with a stunning display. The ferocious smartphone giant is known for frequent and multiple releases of their devices from smartphones, tablets, Smart TV’s amidst a wide range of consumer electronics and home appliances.

The Galaxy Tab S in particular seems to be the intersection between innovation and functionality as Samsung has packed it with powerful specs and features to keep it relevant and irresistible. The Tab S features a 1.3 Ghz 1.9 Ghz or 2.3 Ghz Quad Core processor depending on region. 3GB RAM, 16/32 GB variations with expandable memory.

“The tablet is becoming a popular personal viewing device for enjoying content, which makes the quality of the display a critical feature,” said JK Shin, CEO and President of IT & Mobile Division, Samsung Electronics.

Samsung has also made sure that the Tab S comes with a host of productivity apps and premium subscriptions in what they are calling a Premium content Ecosystem. This is made up of Samsung’s Paper garden, Galaxy gifts, Kindle for Samsung. Netflix Google Play among others. These key partnerships with major content providers offer Tab S owners access to content right from their tab for free or at a subsidised cost. Like the 50GB of Box and dropbox space. Subscription to leading Magazines and journals like the Economist, Wall street and journal and many others. Samsung says on their official blog saying that

“With the launch of the Galaxy Tab S, Samsung is setting the industry bar higher for the entire mobile industry. It will provide consumers with a visual and entertainment experience that brings colors to life, beautifully packaged in a sleek and ultra-portable mobile device.”

whether the Tab S is the official iPad killer, we are yet to find out but so far the specs and current reviews are promising.

The Samsung 8.4Inch will cost $399 while the 10.5 inch will cost $499. you can now pre order the Tab S LTE version and the WiFi version is said to be available later on in the year. With Samsung’s distribution, we can be sure that the Tab S will be readily available even in Uganda though the price may change with a possible 50% increase by the time the device gets here.