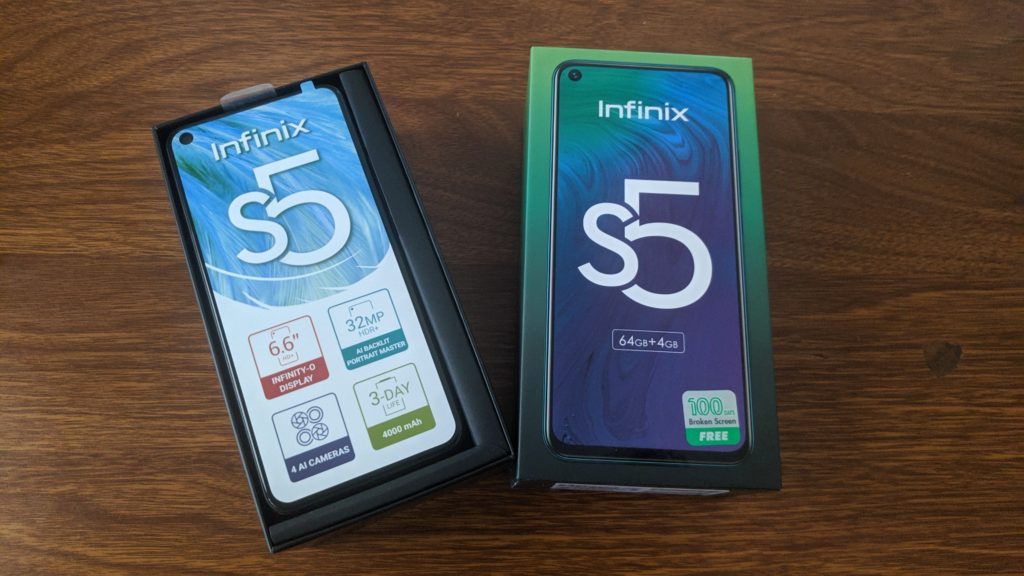 The Infinix S5 has been out for quite a while now, having been first unveiled back in October 2019. Nine months into the device’s life and still, it remains very relevant in the market, thanks in part, to its specs and price.

The device is readily available in many stores across the country and due to the attention the device has been getting, we thought it wise to get one and tell you all about it.

First up, the unboxing. Once you get the phone, these are the items you will find in the box.

The first thing you will notice about the device is its heft. This is a beefy device. And I am coming from a Pocophone F1 that weighs in at 180g. Asides from the weight, however, the Infinix S5 is a beautiful device. I have the Violet color option and it pops!

The device has a mic, a 3.5mm headphone jack, a micro USB port and the speaker at the bottom. The right hand side has the volume rockers and the power button.

The left hand side has the dedicated Dual SIM and SD Card tray and up top, the phone is bare.

The device’s specs are highlighted below.

Generally, the device feels well built. The first boot took less than a minute and the initial setup is the one we’ve come to know and love. No surprises here.

The surprise came once the device was booted up. The sheer number of pre-loaded apps is alarming. See, I am a stock Android kinda guy. I got rid of MIUI less than a week after purchasing my previous device in favor of Android 10’s stock-looking Lineage OS.

This build of XOS comes with many of the Stock Google apps we have come to rely on over the years, like Chrome, Gmail, Drive, Google Photos, and many others, preinstalled.

The company also took the liberty to pre-install a bunch of its apps like;

Also preinstalled are some games like Danger Dash and Fruit Frolic. If I have one suggestion for Infinix developers, it would be to ask them to tone this down a notch or two.

The default launcher is also a bit much as it comes with tons of ads. See attached image for illustration.

Since the device has been out for several months, I will be on the look out for updates to the device and see if they change the experience, if at all,

I will be using the Infinix S5 for the next couple of days as my daily driver and in the process, I will try pushing it to the absolute limits and report back on my findings in my upcoming review of this device. Stay tuned for that.