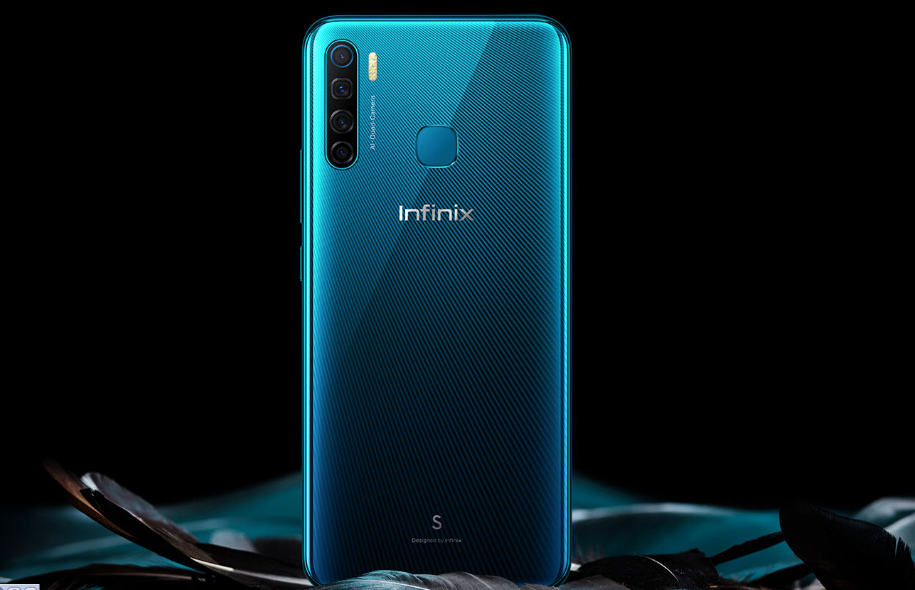 Just about 7 months after released the highly-revered Infinix S4 (the first device from the OEM to have a waterdrop-shaped display notch and triple rear-camera setup), Infinix Mobility is here with a new flagship for the Hot S series.

Dubbed the Infinix S5, the device comes with improvements in aesthetics, camera, and storage. Price-wise, the device is also a bargain. It also comes on four different variants to give users a variety to choose from — depending on their budget. Basically, there’s a Hot S5 for every price-class out there.

Let’s check out the features of the device.

In terms of body build and size, the Infinix S5 is just a little bigger and heavier (178 g) than its predecessor. And this is because it comes with a bigger screen and more components like an extra camera, etc.

On the rear, the fingerprint sensor is close to the top of the device and the quad-cameras are aligned vertically at the top-left corner of the device. The quad-LED flash lighting set-up can be found close to the rear camera arrangement too. Taking a closer look at the rear of the device, you’d notice some patterns on it.

These patterns, according to Infinix, were inspired by a bird (called the Quetzal bird) and helps give the device it’s gradient-like appearance. The three color variants (Nebula Black, Quetzal Cyan, and Violet) of the Infinix S5 are also inspired by the device.

The design of the Infinix S5 is impressive, an improvement from the predecessor. One thing that remained the same, however, is the presence of a Micro-USB port at the bottom of the device. It’s 2019, Infinix, USB-C is the in-thing now. Aside that, everything else looks and feels good. Then the display…

The Infinix S5 sports what the OEM calls the “Infinity-O display”, a similar bezel-less display concept pioneered by Samsung. At the top-right corner of the 6.6-inch LCD display, you’d find a tiny punch-hole cut-out that houses the device’s front-facing camera. This makes the Infinix S5 the first smartphone from the brand to sport a punch-hole cut-out. Impressive, I must say.

The punch hole gives the device’s display more room and helps reduce the bezel. The screen comes boasts of an HD+ (720 x 1600 pixels) resolution, a display density of 270 ppi, and a 90.5% screen-to-body ratio. You’d surely enjoy a cinematic experience while watching movies or playing HD games on the device.

This is where the Infinix S5 disappoints. The device comes with the exact software and processor configurations as its predecessor, the Infinix S4. Software-wise, it is based on the Android 9.0 Pie operating system. There’s no word from Infinix on the possibility of an Android 10 update in the future but we expect it to.

Underneath the super appealing aesthetic of the device, a Mediatek MT6762 Helio P22 chipset that sports an Octa-core 2.0 GHz Cortex-A53 CPU powers the operation of the Infinix S5 while a PowerVR GE8320 GPU handles graphics. This is the same chipset, CPU, and GPU that powers the Infinix S4.

For the Infinix S5, the four cameras on the rear are configured accordingly: a primary 16MP lens, a secondary 5MP ultra-wide-angle/macro lens, a tertiary 2MP depth field lens, and lastly, the AI lens.

The Quad-LED smart flashlight is also positioned close to the quad-camera setup for improved lighting in low-light environments.

On the front, the selfie camera is a 32MP sensor that features improved AI technology, enhanced low-light and backlighting, and true-to-life capturing.

For the Infinix S5 Lite

The camera configuration of the Infinix S5 Lite is a little different. It comes with three cameras on the rear, one less than the regular S5.

The S5 Lite sports a 16MP primary lens, a secondary 2MP depth field camera, and a tertiary AI lens. It lacks an ultrawide-angle/macro lens. The front-facing camera is also pegged at 16-megapixels and, like the S5, it also supports 3D AI Beauty and Face beauty video-calling (currently available in WhatsApp only)

There’s a lot of improvement in this section. First off, the Infinix S5 comes with a dedicated SD card that lets users boost their storage up to 256GB, an improvement from the S4’s 128GB.

Both the S5 and S5 Lite ship with a 4,000 mAh Lithium-Polymer battery and can be charged via the Micro USB port at the bottom of the device. Infinix says the battery is capable of a 50 Hours Talktime and 32 Days of standby.

The regular retail price of the devices, however, are as follows;

All variants of the device will officially begin to ship/retail by November 19th. For the features that the devices pack, they are worth what they sell for.

What do you think? Would you be disposing of your S4 to get the S5? Or the S5 Lite?