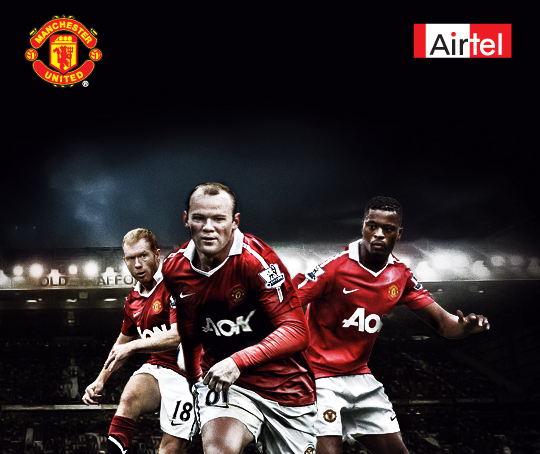 Nairobi, Kenya, March 12 2014 – Bharti Airtel (“Airtel”), a leading telecommunications services provider with operations in 20 countries across Asia and Africa and popular  English football club Manchester United  have announced details of a new mobile application  designed to get its energetic fans in Africa closer to the club.

This new app joins a growing collection of ways for fans to get the latest news, views and information from the Club. In summer 2013, Manchester United became the fastest sports organization to reach one million followers on Twitter and Google+ and is credibly known to be the fastest growing Premier League club on Facebook, Twitter and Instagram. This also allows the customers engage with their favorite club. Airtel seeks to provide innovative products that add value to customers and the launch of this application is in line with this through supporting various passion points.

Football is one of the biggest passion points for many Africans and we look for innovative ways to provide value to our subscribers. Manchester United’s Club App will offer exclusive free content for our subscribers over the normal content that will be pushed through this App. The launch of this application goes on to further cement our partnership with Manchester United Football Club and we look forward to hosting this application on our mobile network allowing fans to get closer to their favorite club. – Mr. Andre Beyers, Chief Marketing Officer of Airtel Africa, commenting on the launch of the Club app.

Group Managing Director, Mr. Richard Arnold, commented: “The launch of the mobile app with Airtel Africa represents another step forward for Manchester United, and is a fantastic and fascinating way for our followers to stay in touch with what’s happening at the Club.  With nearly 147 million followers across Africa, we’re delighted that our regional partner Airtel Africa is helping us to get even closer to our fans.”

Download the mobile app for free on iOS and Android here.