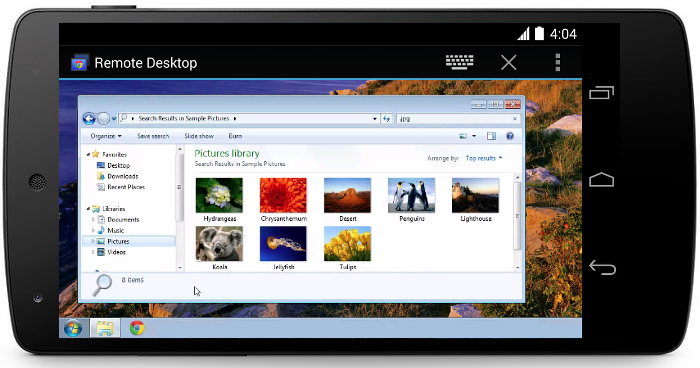 Google yesterday launched the Chrome Remote Desktop App for Android (Now available for Download) that lets you access your desktop computer from your smartphone or tablet whether through a Chrome web app for Mac, PC, and Linux or through Chrome OS itself. The Remote desktop service has been available since 2011 and has now just been made available for Mobile.

The official Chrome Blog posted that: “Chrome Remote Desktop has let you remotely access your machine from another laptop or computer in a free, easy and secure way. And now, with the release of the Chrome Remote Desktop app for Android, we’re making it possible for you to do the same thing from your Android device.”

Google says that using Chrome Remote Desktop is simple and can be done by enabling your Windows or Mac machine for remote access through the Chrome Web Store app. Next, simply launch the Android app on your phone or tablet, tap on the computer’s name and start using your remote machine as if you were sitting right in front of it.

Google didn’t specify when the iOS version of the app would be ready but they mentioned that it would be later this year.