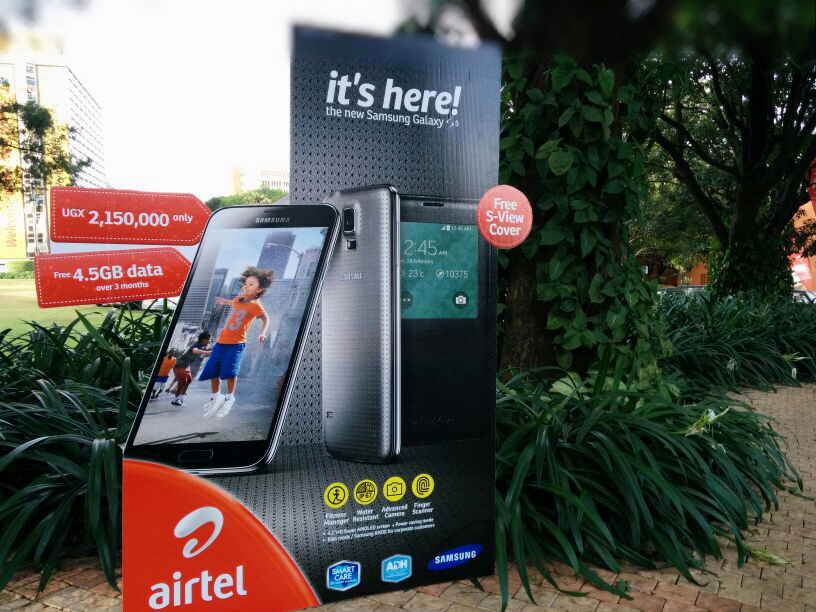 Airtel Uganda and Samsung Electronics (East Africa) today launched the much anticipated Samsung Galaxy S5 at a cocktail event in the plush gardens of the Serena Hotel Kampala.

As part of an on-going global launch of the Galaxy S5 Smart Phone in key markets and just a week after the launch of the handset in Africa at a colourful event in South Africa, Samsung Electronics East Africa is taking the lead to unveil the latest addition to the Galaxy S line.

Uganda becomes the part of the pioneer African countries in which the smartphone has been launched, after South Africa, Zambia and Kenya.

The Samsung S5 is the one phone that has the global phone market buzzing it is the most anticipated phone to be released in 2014; pre orders for the device exceeded 20 million units less than two weeks after the announcement of the commercial launch.

In a strategic alliance, the Galaxy S5 will be available at all Airtel and Samsung authorized dealer shops in Uganda.

“We are very excited to make this ground-breaking phone available on the Ugandan Market. Ugandans are becoming tech savvy and Airtel is committed to keeping up with their technology requirements,” said Airtel Uganda Managing Director, Arindam Chakrabarty.

“The latest demand is for the Samsung Galaxy S5 which we are availing with an exciting offer to customers who would like to pre-book the phone,” he continued.

Minister of State for ICT and communications Hon. Nyombi Thembo at the launch said “I would like to applaud Airtel as they continue to convey a sense of modernity, energy, innovation, trust and focus on the future and on its customers. This event has given us an opportunity to reflect on the progress made in Uganda so far within the telecommunication sector.”

Understanding what matters most to us in our lives, the Samsung GALAXY S5, redefines the way we live and to maximize our fulfilment of life. This sleek and innovative smartphone makes every moment of life meaningful; it understands the value of relationships, enabling true connections with friends and family. It believes in the importance of an effortless user experience, making your life easy and hassle-free; and, it empowers your life, helping take care of your well-being all which are qualities that Airtel Uganda’s ethos encompasses in their together we can thematic campaign.