A couple of weeks ago Orange introduced “Happy Hour” promotion that gives you 1GB of data for either an hour during the day or 6 hours during the night. The promotion that has been greeted with much enthusiasm considering that internet has become a permanent resident on many people’s budgets.Since a lot of work and communication is currently powered by Internet, many people find themselves needing internet and not being able to afford it in the volumes they would want.. Airtel was the first to introduce the overnight package of 1GB at 2500 Ugx (about $1)  and later Smile Telecom. Orange is the latest ISP to offer the service.

We decided to get hands-on with the “Happy Hour” and Day and Night packages to give a feel of the service and here is what we thought about it.

1. Easy to Subscribe
We found the service easy to subscribe to.  All you have to do is dial *133# on your phone and select option 4 or 5 depending on which package you want. We found this very easy to use and one didn’t have to jump through hoops or loops to subscribe to the package. Everything was instant and the package was activated immediately. 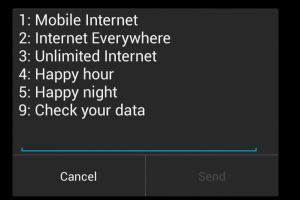 2. Affordable
Even though the need for data is not debatable, the cost of data is still a little high for too many internet users in Uganda. Currently, 1GB of data goes for 35,000 Ugx (about $14) on Orange and Airtel and 37,500 Ugx (About $15) on MTN.
An average user consumes about 100MB per day or 3GB per Month which costs an average of 75,000 Ugx (About $40).  Being able to get data at as low as 2500 Ugx for a GB is news that comes with a lot of relief. When I had to Skype my friend in South Africa or have a Skype Interview with a client, the “Happy Hour” came in really handy. When I needed to watch my favorite YouTube videos and download some movies and TED talks the “Happy Night” came in really handy. 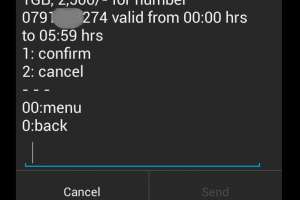 3. Steady Connection/Good Speeds
The most frustrating part would be getting data cheaply and not being able to get good speeds. Orange surprised me I was able to achieve download speeds of up to 700kbps with the connection fairly steady. My Videos downloaded in a few minutes and this felt good.

Overall, we love the promotion and its one that we and many other users have found very useful. Have you used the Happy Hour Promotion before? What were your experiences? Share with us in the comments below.