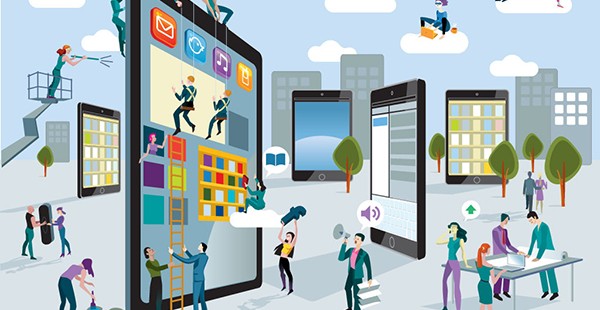 According to the Mary Meeker’s 2014 Internet Trends Report, Mobile Usage in Africa has grown by over 100% in the last 12 months. Mobile usage was previously at 18% in May 2013 but is now projected at 38% in May 2014 and definitely still growing. In the graph below, Mobile Usage is derived as a percentage of Web usage by region. Africa comes first, followed by Asia, South America, Europe, North America as Oceania takes the last position. The global average is currently at 25% down from 14% last year. 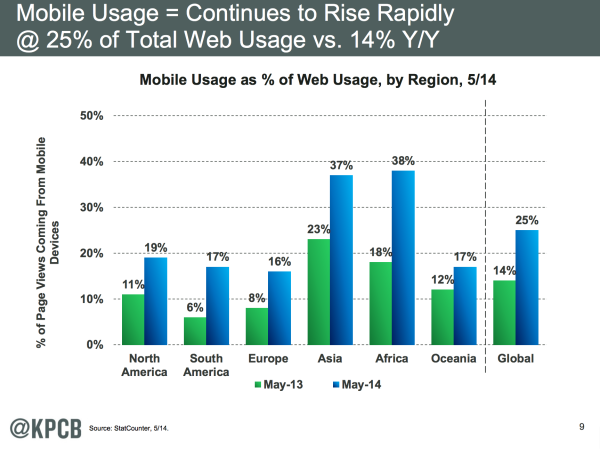 The aforementioned report concurs with the recently released Ericsson report, this further asserts the rise and rise of Mobile Usage in Africa. According to Ericsson, a world leader in communications technology and services, reveals astronomical data traffic in the Sub-Sahara region. The Telecom provider showed in its June 2014 Sub-Saharan Africa Ericsson Mobility Report that in 2014 phone users accessed 76,000 TB (terabyte) of data per month, double the 2013 figure of 37,500 TB per month. In 2015 the figures are expected to double again with mobile phone users accessing 147,000 TB per month. The reports  shows Mobile internet use doubling year-on-year, with usage expected to increase 20 times in the next five years. According to Wikipedia, Mary Meeker is an American venture capitalist and former Wall Street securities analyst. Her primary work is on Internet and new technologies. She is a partner at the Silicon Valley venture capital firm Kleiner Perkins Caufield & Byers. Image via TheNextWeb