Internet packages and data tariffs never used to be complicated a few years ago. All you got from the Internet Service Provider(ISP) was a dial-up connection with about 64Kbps speeds or faster if you could afford which you paid at the end of the month. That was it.

Today, you can say goodbye to unlimited internet. It’s now about internet bundles measured in MBs and GBS. The good news is that compared to the old days, you get a little faster mobile internet speeds usually in Mbps which is more than 10-20 times faster than your good old dial-up modem. The bad news is, you can only go as far as your data bundle can take you!

Now, we challenged ourselves to the daunting task of comparing data bundles and rates from the various major mobile Telecoms in Uganda — MTN Uganda, Orange Orange, Airtel Uganda and Uganda Telecom (UTL). The networks didn’t make it any easier for us having priced their packages in a way that isn’t uniform and easily comparable.

Hence this data price comparison is based on “best effort” analysis between the various pricing structures based on the latest data from each network’s website to keep it as simple as possible. Therefore, when determining which network or data package is best for you, don’t take our word for it. We have put links to the various data pricing pages of the various networks that you can analyze yourself and make a decision. 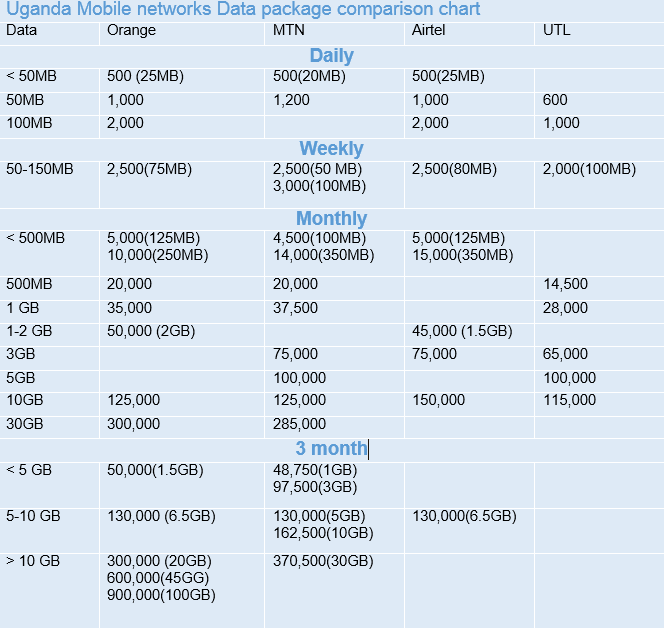 Now notice that we have intentionally left out internet data bundles for Smart Telecom, the latest mobile Telecom in Uganda as of this writing. This is because being a new entrant in the market, they’ll generally have low if not, the lowest data prices (and they do) in order to lure customers to their network. Hence, we wouldn’t be fair to the other networks if we compared them against a player that hasn’t yet gained maturity in the market.

Once your daily, weekly or monthly plan is expired, the Telecoms revert you to Pay-as-you-go pricing. What this means is that, your network will start billing the data you consume from your regular voice Airtime. Some do this automatically which we find very annoying while others will warn you that regular billing will start after a certain period of time.

Pay-as-you-go is billed on per KB. So here’s are the rates/KB of data and the USSD access codes.

At the time of this writing, we couldn’t UTL’s rate/KB although we intend to update this post as soon as they come through. Otherwise, without UTL, Airtel comes of with the lowest Pay-as-you-go data rate at Ugx 0.75/KB.

Following the United Nation’s declaration of the access to the internet being a human right, MTN Uganda started giving 15MB of data for FREE to its customers every first week of the month. The other networks haven’t followed suit though. Even though MTN scores highly with low bundles in this category, it fails to offer 100MB/day package that the rest of the networks are offering. Now UTL comes off with the lowest pricing for daily bundles when it offers almost half the price for what everyone else is offering.

This category is a closely contested battle between MTN that’s offering some cool 15MB for FREE, perhaps just enough to help you whatsapp away while UTL is killing it with the lowest price point. But as they say, nothing beats free! So MTN takes it home here.

Taking the Ugx 2,500 price tag, MTN is offering the least amount of data of only 50MB, then Orange with 75 MB, then Airtel comes in closely with 80MB but UTL is surprisingly offering more with 100MB for less (Ugx 2,000). We certainly don’t see why anyone would subscribe for the weekly bundles when you weigh in daily and monthly packages, but that’s just us. However, the winner is certainly clear here, it’s UTL.

To be honest, our heads hurt even till now when it came to this category. The different networks are offering completely different packages that don’t intersect. Airtel in particular is seen to be a little naughty with its pricing model here, shying away from the common denominator shared by its counterparts. Airtel equalizes with MTN on the 3GB bundles with each offering it at Ugx 75,000 although MTN edges it with the 10GB package going for Ugx 125,000 compared to Ugx 150,000 on Airtel.

The fight then shifts between MTN and Orange who are both offering competitive prices. Orange takes on MTN at the low data bundles such as the 1 GB bundle that costs a little lower at Ugx 35,000 on Orange and 37,500 MTN while for Ugx 75,000, Orange is giving you 500MB more than what MTN is offering (3GB).

When it comes to higher data bundles such as the 30GB package, MTN is Ugx 15,000 cheaper than Orange. UTL on the other hand doesn’t offer as many options as MTN and Orange do, but does win the rest of the networks with once again the cheapest data plans. Hence this category has really been a tightly contested one, but clearly Orange’s lower prices and numerous options and UTL’s cut-throat low prices make them our favorites here, although we just couldn’t come up with the ultimate winner.

Winner: Tie between Orange and UTL

This one is for the long rangers. For starters, UTL the price king doesn’t not feature any package in this duration. Airtel looks to be a little shy in this category with just one package leaving the battle to MTN and Orange when it comes to package options. Since we still need a verdict, we shall examine what each network is giving you over a period of 3 months for Ugx 130,000 which seems to be the common denominator. Both Orange and Airtel are giving you 1.5GB more than what MTN is offering leaving us in an undecided position between these two networks.

Winner: Tie between Orange and Airtel

Update 1: Several people are acknowledging that while UTL is offering unbeatable prices, its Internet is the slowest of all the Telecoms. Hence again, as we have stated, this is only a price comparison. But when it comes to making a concise decision, other factors such as Internet Speed, coverage, customer care, device support come into play.

Orange has been pushing its happy hour promotion that lets you buy 1GB of data from as low as Ugx 2,500. We are sure you’ve seen the billboards around town and online which is clear sign that Orange isn’t letting anyone have its lunch money. Orange is giving its customers 1GB of data at Ugx 5,000 for 1 hour any time of the day and the same amount of data at UGX 2,500 but between midnight – 6am.

On the other hand, the network has a close and equally aggressive competitor, Airtel. The company has released a promotion dubbed Switchon that gives users the ability to borrow, share and, load data using a data scratch card. With Airtel WTF promo which is part of Switchon, for only Ugx 500, Airtel is offering 100MB valid for 24 Hours to access WhatsApp, Twitter and Facebook only. Airtel is using a mixture of social media clout, a dedicated promo site and clever advertising messages to activate users to its data service.

MTN has been having a nation-wide data expo with the clear intention of capturing the data market. However,  that’s all we know so far while Uganda Telecom has, as always kept a low profile.

Promotions usually boil down to personal preferences — what works for you. Orange and Airtel both seem to have winning strategies here with Orange targeting power or heavy users while Airtel is leaned more towards the casual Whatsapp/Facebook casual internet user.

Winner: Tie between Orange and Airtel

It’s tough making clear conclusions when it comes to service comparisons especially in a market that’s tightly contested. The Telecoms are well aware of the fact that the voice market is rapidly shrinking and they must now look towards tapping on the emerging rapidly growing data market. Hence everyone wants the biggest piece of the pie and they’ll do whatever it takes to customers over to their sides. This is especially seen in the data pricing structure which shows that each company is eavesdropping on what the other is offering. Hence, determining the best data plan for you is a combination of several other factors other than mere price such as customer care, coverage, speeds, supported devices among others for a more concise comparison such as the one we did between Orange and Airtel.

That’s it folks, lets us know your experiences in the comments.

17 thoughts on “Africell, MTN, Airtel, UTL Uganda data bundles compared: Which Internet package is the best for you?”