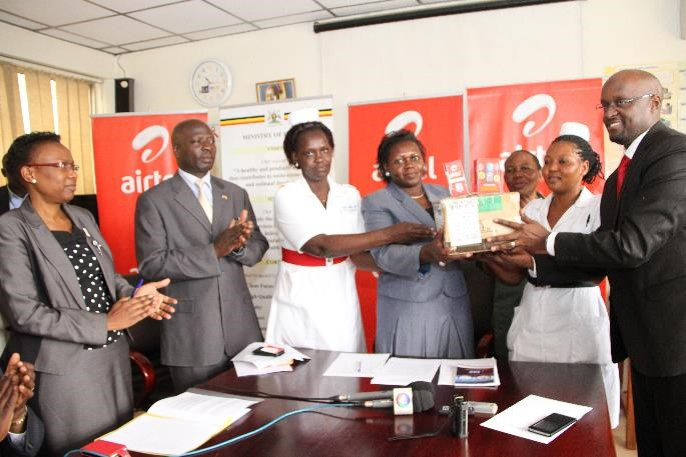 Airtel Uganda, a leading telecommunication company in Uganda came out to help and ensure alertness and preparedness of health workers in the most prone areas in Uganda on the possibility of an Ebola outbreak.

Following the outbreak of Ebola that has already claimed thousands of lives in West Africa, and a contained Marburg outbreak in Uganda,  Airtel Uganda handed over one hundred and fifty mobile phone handsets to the Ministry of Health at an occasion graced by The Honorable Minister of State for Primary Health Care – Honorable Sarah Ajeng Opendi. The handsets, which came fully loaded with SIM Cards, 530 minutes per month, 100 sms per month, 500mbs each for the next three months, are going to be distributed to every health centre IIs, IIIs and IVs in districts that are prone to Ebola outbreak that have been identified by the Ministry of Health through the Uganda Nurses and Midwives Association.

Each district shall receive 4 phones with one specifically issued to the district Nursing & Midwifery Association Coordinator to assist in addressing the challenges nurses and midwives normally encounter with patients on referrals; such as failure to reach doctors and ambulance services in time. This phone shall be handled by the nurse or midwife on duty depending on the health Center duty roaster or work schedule.

Speaking at the handover ceremony, Airtel Uganda Legal Director, Mr. Dennis Kakonge thanked the Ministry of Health for their tireless efforts in fighting disease outbreaks in the country. “We are proud to join you in your tireless fight against disease outbreaks in Uganda,” he said. “At Airtel, we believe that if we continue to work together with the Ministry of Health, we shall manage to stop any possibility of an Ebola outbreak in Uganda as well as the Marburg virus,” he added.
“Very few companies have come out to fight the potential outbreak of Ebola in Uganda,” said Honorable Sarah Ajeng Opendi. “I would like to thank Airtel Uganda for their caring and giving spirit and I advise all the districts that have received these mobile phones to use them as intended in order to curb the Ebola scare in Uganda,” she added.

It’s worth noting that Marburg, Ebola’s cousin has been contained after one victim died of the disease over two weeks ago. The Ugandan government declared the country Marburg-free after no other victim was reported in two weeks since the first victim was buried.