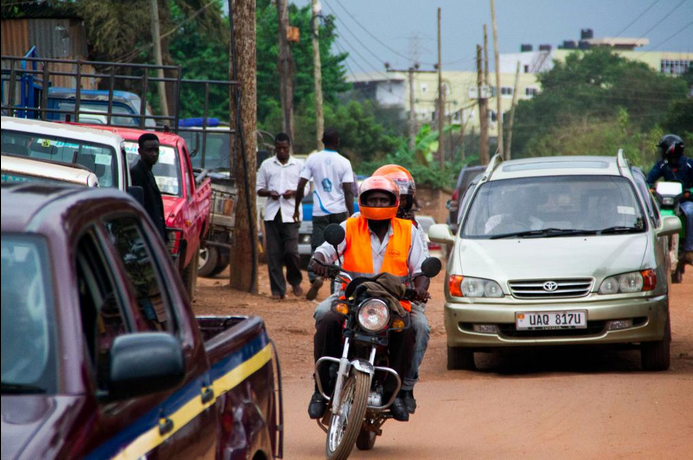 Usually an entrepreneur buys a motorcycle, locally known as boda boda, which they then rent out to a rider who pays them a daily rent on the motorcycle. Anything he makes above rent, he keeps, and then one day a week (usually Saturdays) he doesn’t pay any rent and keeps all the profits.

Meanwhile, the owner has to cover maintenance, insurance and registration costs, fuel costs are covered by the rider.

The enormous need to hit these targets are partly to blame for the errant nature of boda bodas on city roads and the numerous accidents brought about by their sickening actions. But not anymore. SafeBoda wants to alter a part of the narrative, it wants to tweak a small but yet critical part of the aforementioned model for the greater good.

SafeBoda, a startup attached to Outbox hub in Kampala, wants to breathe safety and a better user experience for motorcycle passengers in the already ram shackled transport network in the city.

Like uber, the popular American taxi app, works. A passenger, under the auspices of the uber mobile app, taps away on their smartphone and orders for a taxi, one of the assigned drivers picks them up and drives to a destination of choice. All this is at an extra fee above the ordinary market rates, of course, for the convenience and great user experience traded.

SafeBoda’s pilot which commenced about two and half months ago, lets anyone with a smartphone choose a motorcyclist that has been trained in defensive driving, first aid, traffic rules and motorcycle maintenance. The travelers can reward points to the best riders allowing a fully fledged crowd-sourced system where the best riders get chosen.

But what is for certain, however, is that SafeBoda believes there will be worthwhile synergies between safety-conscientious and mobile savvy passengers willing to part an extra dime in the near future.

Again, just like uber is famed for its black automobiles, SafeBoda is banking on wearing orange helmets coupled with standout orange vest bearing the company’s hotline number written on the back.

“We believe that a market-based solution that incentivizes road safety can prevent injury and death and significantly reduce public health costs. We are a community of SafeBoda drivers and responsible passengers using a mobile application to find each other.” says Alastair, co-founder of SafeBoda

While, the concept of uber-izing motorcycles is not new, most especially in East Africa where Kenyan based Sendy is into the — on demand– logistics side of delivering various goods, just like the model HelloFood employs, SafeBoda’s unique selling point is safety; safety of human life above anything else. Perhaps when that trust is gained, they will feature into the logistics too.

Now, as part of a pilot, 25 SafeBoda drivers are scattered around the expat-populated Bukoto, Kisimenti and Garden City areas of central Kampala proudly donning their signature orange kit. SafeBoda’s charges generally cost between UGX5,000 and UGX10,000 (about $1.80 to $3.60 U. S.), which is a tad too high for an average cost of UGX2,000 (about $0.8).

Although it’s early days, more than 100 drivers are on a list waiting to begin working with SafeBoda. Those already on the road with the company are impressed.

Download the app on your Android smartphone or iPhone (coming soon).