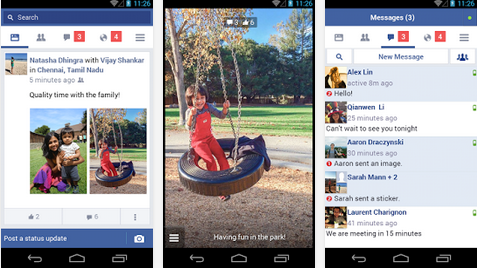 If you have an entry-level smartphones such as Nokia X, Huawei Gaga or Samsung Galaxy Pocket and you like to have Facebook on your phone, well, FB has finally thought about you.

Knowing the constraints of entry-level smartphones such as memory and processing power coupled with slower internet speeds such as EDGE, Facebook has designed a custom version of its App — Facebook Lite — to address this challenges.

The normal Facebook app is usually 5-10MB depending on your device, but the Facebook Lite App is only 252KB which is more than 5-10 less than the usual size. The App is reportedly based on Snaptu, an app that Facebook acquired in 2011, which allows Facebook to run on some feature phones.

Facebook Lite is:
– Fast to install — the app is less than 1 MB
– Quick to load
– Efficient with data
– Designed for 2G networks and areas with limited network connectivity

Even though I had a high-end smartphone like the Samsung Galaxy S4, I would still install this version of Facebook, not to minimize on my phone’s memory footprint, but to get a good experience on slower networks and save on data.