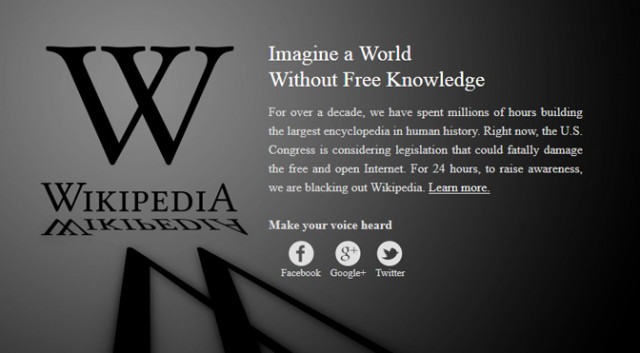 SOPA  stands for  Stop Online Piracy Act and it’s  an anti-piracy bill working(or was working) its way through the US Congress until it was postponed from being voted on in the House. SOPA has been drafted together with the PROTECT- IP Act, known as PIPA.

Some of the internet’s most influential sites—Reddit and Wikipedia blacked out on January 18 last week to protest the much-maligned anti-piracy bill.  Closer to home, local tech news website pctechmagazine and Ugandan online portal UGO also went dark on the same day in protest. You can search twitter hashtag #UGsitesBlackoutSOPA for more. But by now you should be asking, what does a bill drafted in the US — thousands of miles from here have to do with me living in Uganda? Good question.

If you tried accessing Wikipedia last week on January 18 last week, you probably already have a clue. If SOPA had been passed, it would directly affect the operation of Google, Wikipedia, Twitter, Facebook among others that run on the internet. The internet is a global infrastructure which you in Uganda uses almost everyday. No one or no country solely owns it and controls it. We like to call it the cloud — an arbitrary location where your emails, photos, videos, notes are stored. SOPA in short will (since it’s not yet dead) demand that content service providers such as Wikipedia, Facebook, Twitter police user-generated content to avoid or cab copyright infringement and save themselves from being shut down.

Google will have to remove every website that supposedly infringes on copyright from it’s search results. PayPal, Visa and other electronic payment providers will have to pull the plug on these sites. Now Facebook has over 800 million users and Twitter is fast closing 500 million users who are uploading content every second. To police what’s being uploaded for copyright infringement would require either algorithms that are out of this world or a dedicated workforce of monumental proportions simply out of reach for these companies.

Start-ups wouldn’t even bother starting business and that kills innovation. Eventually the inevitable will happen. Facebook plus other website that you currently use to store your photos, emails, notes, thoughts will be gone. Which means you shut down your digital life and reconnect with your analog life. Even though SOPA is not yet dead but rather postponed, one thing is for sure, it will come back but at least not in its present format.

One thought on “How SOPA changes everything about the Internet”