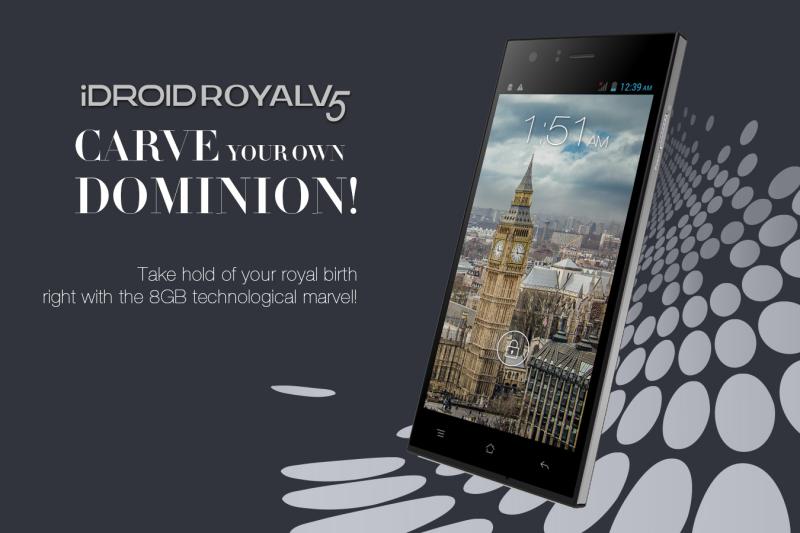 The iDroid King K7 is the next iteration to the Royal V7 from what we can tell. It’s a 5.5 inch screen 4G LTE unlocked device with a Quad-core  processor, 13/5MP back and front cameras. It comes with twice the internal memory — 16GB — compared to the its predecessor. However, we don’t know much about the actual processor, RAM and battery Specs at this point. But iDroid USA says the phone can go for upto 4 hours of talk-time and standby time of 120 hours which isn’t any much different from the Royal V7. We also don’t much about its retail price yet.

The other phone is the iDroid Royal V5. This device’s release data is expected to be launched around 10th June, 2015 which was yesterday. It’s obvious that iDroid hasn’t launched the phone. Anyway, the iDroid Royal V5 is an unlocked dual-sim 4G-ready World Phone. It’s a 5 Inch screen smartphone with a 1.3Ghz quad-core processor, 8GB internal memory, 1 GB of RAM, 8/2MP back and front cameras and a 2000mAh Battery. The Royal V5 is exactly like the iDroid Tango A5 except the A5 actually has a bigger battery of 2200 mAh Battery! The iDroid Royal V5 is expected to retail at a price of $149.99 (Ugx 470,968.60). The Tango A5 is currently retailing for the price of Ugx 369,000 in Uganda which ironically is a lot less than what the new phone will go for.

Okay, you must be really as confused as we are. We can’t see anything new, different and exciting from iDroid USA’s upcoming smartphones. But these are tentative specs and prices since the devices aren’t yet launched. So we just have to wait and see.