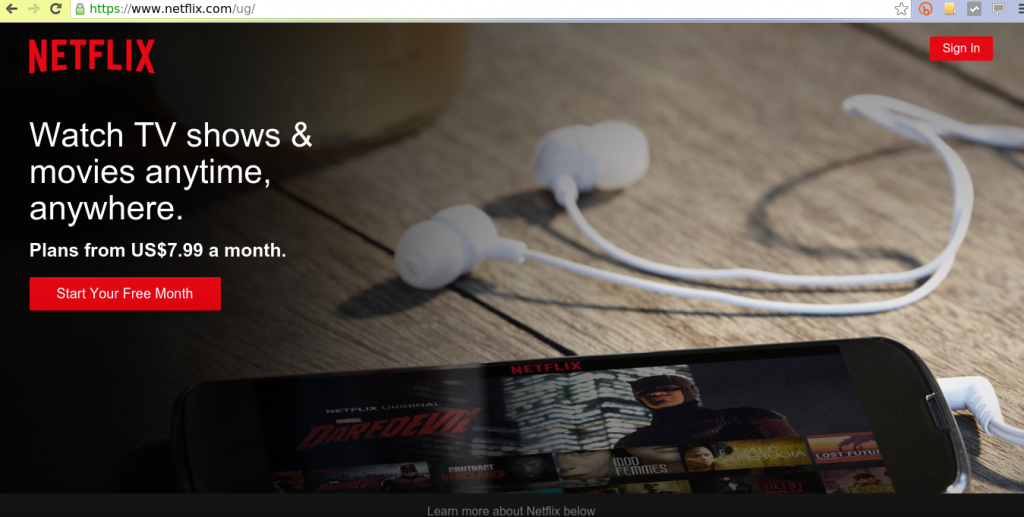 The long awaited arrival of video streaming service, Netflix is finally here. Netflix has launched worldwide giving users the option of streaming movies and TV shows from their smartphones, tablets and Smart TVs.

In Uganda, Netflix can be enjoyed for $7.99 (about Ugx 28,000) per month at www.netflix.com/ug/ .  For starters, Netflix is offering you one month free trial, however, you must sign-up with a working credit or debit card with some money to enjoy this offer. Also since it’s an internet service, you need an active internet package of not less than 1GB to use the service. We warn that you can’t use “MBs” to use Netflix.

DSTV has for long monopolized the video content space in the African content often offering limited or too expensive content options. Also Multi-choice hasn’t taken Video-on-demand or watch-when-you-want kind of services seriously until recently with products like DSTV Box Office or DSTV Catchup. When Netflix touted its plans of entering the African market, Multi-choice released ShowMax in south Africa, its answer Netflix.

Meanwhile Google has also been offering a similar service through its play store dubbed “Google movies”. You can actually rent or stream a movie from the play store for Ugx 25,000. Obviously this can’t compare to Netflix’s offering.

We don’t know how video streaming space will turn out, but the winds of changing are just beginning to sweep the continent.

Here’s complete list of other African countries where Netflix is available.

4 thoughts on “Start using Netflix in Uganda from as low as Ugx 28,000 per month”