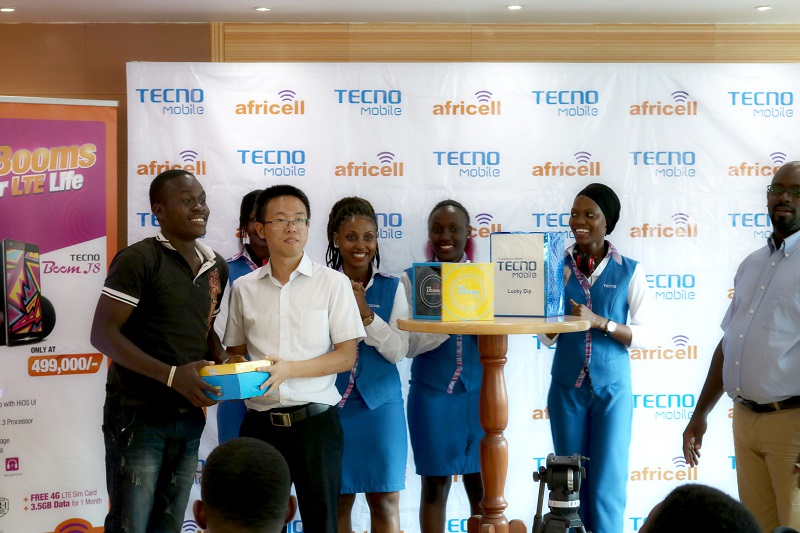 The Tecno Boom J8 has finally been launched in Uganda. Tecno in partnership with Africell Uganda launched the Boom J8 at a colorful low key event at the Africell Headquarters with a couple of press people and tech enthusiasts. This is the first time Tecno is launching a device in Uganda. Previously, devices were just released but not officially launched.

All attendees of the launch got a gift hamper that had different gifts ranging from Selfie sticks and Battery Banks by Oraimo, USB thumb drives, a T-shirt, Notebook and Pen. 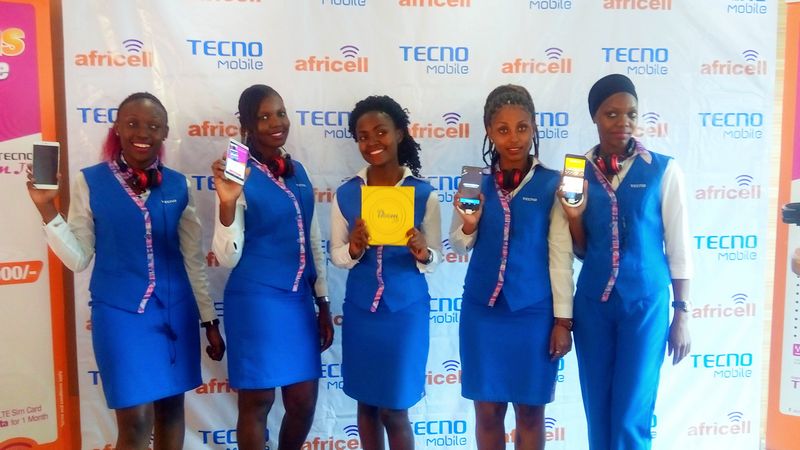 This partnership makes Africell the first vendor to officially carry the Tecno Boom J8 in Uganda while offering 3.5GB of data and a free 4G SIM card with every purchase. Since the Tecno Boom J8 is a 4G LTE device, one will be able to enjoy Africell 4G especially with the free data.

At the launch of the new Tecno Boom J8 music, Hong Ji, the Tecno Mobile Operator Sales Manager said the mobile giant Tecno has been working hard to create a signature experience on all its mobile devices that users easily identify and associate with the Tecno brand, making it stand out of the clutter.

Hong said “What HiOS has helped us achieve is a unique user experience, one like no other. TECNO users can now tell their favorite brand by merely interacting with its UI. HiOS feels different and acts different; a lot more intuitive than the android OS 5.1 which forms its backbone operating system,”

Compared to prices in Kenya and Nigeria, it’s amazing that Tecno Boom J8 has maintained a price of below Ugx  500,000. Just like it’s predecessor, the J7, we expect the J8 to be a big hit. Targeting the middle class and the youth, the Music and Camera phone has some really good specs and premium design. It’s also important to mention that it’s Tecno’s 3rd 4G LTE device after the Camon C5 and the Phantom 5. It is also the first device to carry Tecno’s custom ROM – HiOS with a better chance at actually getting an update to Android 6.0 Marshmallow.

In comparison with other devices on the market, the Boom J8 dethrones Vodafone’s Lenovo K3 Note as the most affordable mid range device. We will be reviewing the device soon to bring you a comprehensive review but in the meantime, early adopters can enjoy.

Tecno Boom J8 Price and where to buy in Uganda

The Tecno Boom J8 is currently sold at select Africell Uganda stores at the price of Ugx 499,000. As of yesterday an offer was made for Ugx 100,000 cash back for the first 15 buyers but that must have expired by now.

The Boom J8 will also be sold at other Tecno vendors like Banana Phone World, Tecno Stores, MTN Uganda, Airtel Uganda, Vodafone Uganda, UTL among others.

Will you be buying the Tecno Boom J8? YES/NO? tell us why in the comments.