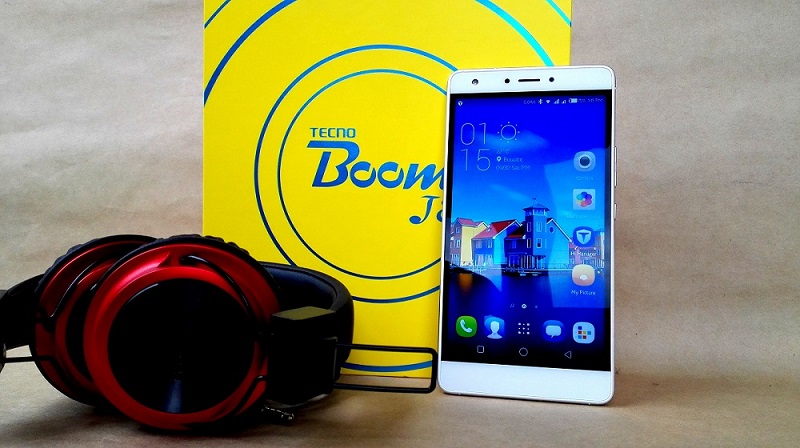 After the rumours and leaks, the Tecno Boom J8 was finally released. For the first time in Uganda, Tecno launched a device. This was the first Tecno Launch/Event in Uganda. When we got the device, we indeed weren’t disappointed. The Boom J8 is the perfect replacement and upgrade for the J7. The RAM, Display, Music and Design were all upgraded to offer a fluid experience.

It must be mentioned that the Boom J8 is indeed a music phone at an alarmingly affordable price. It makes for the best and most affordable mid range device on the market currently.

At first sight, the packaging looks big. That is because Tecno is giving away headphones instead of earphones. The Actual Boom J8 is a sleek yellow box with blue circles and the words Tecno Boom J8. The backside has J8 Specifications. Here is a list of what is in the box.

The first thing you notice is the big box in which it comes. After you open it up, you get mixed feelings about the headphones until you try them on. They have really good sound.

When we first saw the Boom J8, we noticed the premium design. USB charging port at the bottom middle with the speakers compared to the Boom J7 with speakers at the back. We also notice a screen to device ratio of about 75% with really thin bezels. At the top front, we see an LED Flash, a proximity sensor and a front camera.

At just 7.3mm the Boom J8 has a thin 3.5mm frame that really accentuates the design. The Volume rockers and power button have all been put on the right side. While the earphone jack has been left at the top of the device but moved more to the left.

The back is easy to remove thanks to a small dent on the right hand backside. On opening the back, both slots take Micro SIM cards, the memory can be upgraded to 128GB and the battery is inbuilt and cannot be removed. The back cover plastic and not polycarbonate but made from a material that isn’t a fingerprint magnet. We are yet to find out how it reacts to dirt, dust and fingerprints.

When we switched it on, we experienced the HiOS for the first time. We see a “Tecno Boom” boot animation and later “HiOS starting”. We are then welcomed to the most anticipated HiOS. After swiping around and checking out, we were pleased and I must say Tecno has done a good job with their new custom ROM. It was highly customisable with a promise of an OTA update for the first time.

We quickly checked out the camera that was a huge improvement from the J7. It features a wider aperture angle. It also performs excellently well in daylight or outdoors but was terrible in low light. Even with no OIS (which we weren’t expecting anyway) or BSI technology, many will be able to enjoy the J8 for it’s faster shutter and good daylight shots and selfies.

Setting it up was super easy and without any hitches. We also loved how fast and responsive it was and we hope that it’s 4 cores and 2GB RAm will keep it that way months later. We will not let the cat out of the bag yet. Stay tuned for a full, unbiased and comprehensive review of the Tecno Boom J8.

Tecno Boom J8 Price and Where to Buy in Uganda, Kenya and Nigeria

The Boom J8 is going for a shockingly affordable price of Ugx 499,000 at multiple vendors Africell Stores, Banana Phone World and Simba Telecom.

Tecno Boom J8 Price and where to buy in Nigeria:

Tecno Boom J8 is going for the price of between 44,000 -52,000 Naira depending on where you buy it from. Here are some places you can get it from Konga, Jumia and 3C Hub.

Tecno Boom J8 Price and where to buy in Kenya:

Tecno Boom J8 is going for the price of about Kshs 14,999 at Jumia, Kaymu, KilliMall and Bidorbuy.