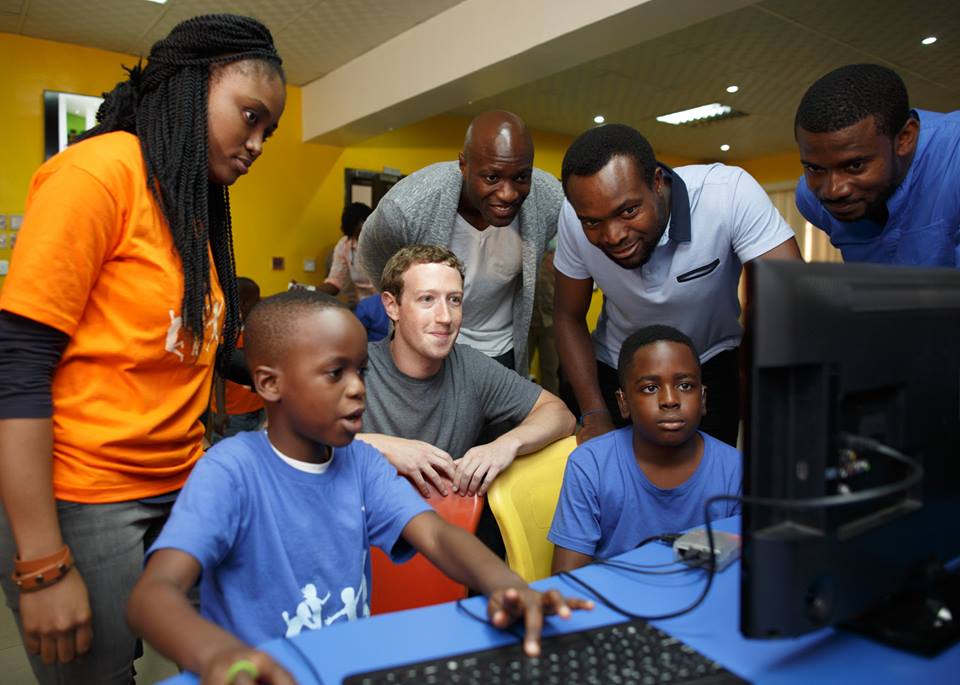 Africa has understandably lagged behind the rest of the world when it comes to technology. But sub Saharan Africa’s high poverty rate, low internet penetration and sparse infrastructure notwithstanding, a quiet revolution is slowly picking up steam. Africa’s technology hubs are booming.
This technology growth has not gone unnoticed by Facebook’s founder and CEO Mark Zuckerberg. He is visiting Nigeria this week on his first trip to Africa, using his time in the country to visit the Yaba technology hub in Lagos, meet with developers and partners, and explore Nollywood.

Zuckerberg is in Nigeria to listen and learn and take ideas back to California on how Facebook can better support tech development and entrepreneurship across Africa.

One of his first stops on the trip was to visit a ‘Summer of Code Camp’ at the Co-Creation Hub (CcHub) in Yaba, known as the Silicon Valley of Nigeria.

CcHub opened in 2011 and at the time didn’t even have an office. Five years later they fill three floors and the roof of a building. At CcHub people can learn how to code, developers can get help launching their first products, and find mentors and funding.

Quotable: “This is my first trip to sub-Saharan Africa. I’ll be meeting with developers and entrepreneurs, and learning about the startup ecosystem in Nigeria. The energy here is amazing and I’m excited to learn as much as I can.
“The first place I got to visit was the Co-creation Hub Nigeria (CcHUB) in Yaba. I got to talk to kids at a summer coding camp and entrepreneurs who come to CcHub to build and launch their apps. I’m looking forward to meeting more people in Nigeria.”~Mark Zuckerberg, Facebook Founder and CEO

Zuckerberg then went to Andela, an engineering organization that is building the next generation of technical leaders in Africa.

Andela is a business that recruits the most talented technologists in Africa and shapes them into world-class developers through a four-year technical leadership program. In the two years since it was founded, Andela has accepted just over 200 engineers from a pool of more than 40,000 applicants. Andela developers spend six months mastering a technical stack and contributing to open source projects before being placed with global technology companies as full-time, distributed teammates, working out of Andela headquarters in Lagos and Nairobi.

Earlier this year, the Chan Zuckerberg Initiative invested in Andela after being impressed by the company’s innovative model of learning and its drive to connect the global technology ecosystem with the most talented developers in Africa.

Mark Zuckerberg live with developers and entrepreneurs in Lagos, Nigeria

Seni Sulyman, Director, Andela Lagos, said: “We are excited and honored to welcome Mark Zuckerberg to Lagos. His visit reinforces not only his support of Andela’s mission, but his belief that indeed the next generation of great technology leaders will come out of Lagos, Nigeria and cities across Africa. Andela has created a platform for passionate, driven software developers and engineers to break into the global tech ecosystem, but the barriers to entry are still very high. Mark’s visit demonstrates to all Nigerian developers and entrepreneurs that they’ve caught the attention of the tech world, and they are capable of succeeding on a truly global level.”

At the end of the day Zuckerberg stopped by an Express WiFi stand in Lagos owned by Rosemary Njoku. Facebook’s Express WiFi lets entrepreneurs like Rosemary set up a hot spot to help their community access apps and services built by local developers.